An expert working group established to create a roadmap for the state's new independent Department of Environment has made recommendations to strengthen environmental conservation and protection. A number of state agencies, especially the Pollution Control Board, have come in for strong criticism. P N Venugopal reports.
27 March 2007 -

The government then sought a roadmap for the functioning of the department, and a Working Group on Environment (WGE) was established. The main terms of reference set for the Working Group were: identification of the major environmental issues, and the institutional mechanisms to address them; suggesting a set of programmes and mandate for the Department of Environment; and formulating a set of projects which can be undertaken during the eleventh plan period. Examination of the role of various agencies like the local self governments was also part of the Working Group's agenda. Renowned environmentalist, Professor M K Prasad was the chairman of the WGE, and C R Neelakantan, an environmental activist, its Vice Chairman. The Group had nine other members including experts and activists, as well as a representative of the State Pollution Control Board.

In March this year, the WGE submitted its report to the Fisheries, Environment and Ecosystem Committee of the Kerala Planning Board, recommending 26 different projects with an outlay of Rs.56 crores, to be implemented during the Eleventh Plan period. And thus for the first time, the Kerala Planning Board is taking up the environment as a specific subject while formulating plan proposals.

The WGE's report identifies the strengths of the state clearly. It observes that Kerala "has all the three maximally productive and biodiversity-wise richest ecosystems in the world, namely the tropical rainforest, the coastal freshwater and brackish water wetlands, and the coastal marine coral reefs. All three systems are compressed within a width of 50 km." It further says that the tropical humid climate of the State, high rainfall spread over more than six months, bio-geographic position, long history of biological as well as human civilisational continuity without major upheavals, are the assets of the state.

These advantages notwithstanding, the state has not been able to arrest a rapid decline in its environmental health. Food self-sufficiency has become totally unattainable. Clean drinking water is becoming a trickle. The quality of the environment, both in urban and rural areas, is fast deteriorating in spite of relatively low industrialisation. As for public administration of the environment, it is generally recognised that present arrangements for environmental protection, namely through the Kerala State Pollution Control Board, the Forests and Wild Life Department, the Health Department and the Land Use Board etc., have been largely inadequate. The inadequacy has to do both with weaknesses in legislation (and their implementation) as well as in the administrative system itself, with too much external interferences and possibilities for mal-administration. 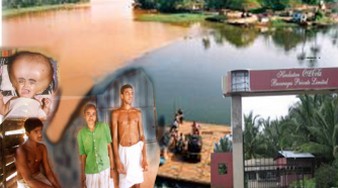 And the WGE has squarely noted all this these; depleting water resources, changing land use patterns, denudation of forests, river sand mining, irrigation and power projects, use of chemical fertilisers and pesticides, mindless urbanisation, all come under its scanner. Considering the increasing population, reduction in space for habitation, developmental projects resulting in ecological degradation and the changing life styles and an ever increasing demand for luxury, the WGE has concluded that "Kerala as a State and its Citizens individually and collectively have not only failed to perform the duties expected of us, but have also violated the constitutional provision." The reference being to Article 48 ("the State shall endeavour to protect and improve the environment and to safeguard the forests and wildlife of the country") and Article 51A ("it shall be the duty of every citizen of India to protect and improve the natural environment including forests, lakes, rivers and wild life, and to have compassion for living creatures.").

Significant recommendations of the WGE

Legal measures and reforms suggested by the WGE

26 projects have been mooted in the report, along with financial outlay for each of these projects. The most prominent among these are:

An interesting addition to the proposed list of projects is a cycling promotion campaign in the state, especially in the urban centres, with specific campaign goals of reviving this eco-friendly transport system.

Other projects include development of Zero-Waste management system for local bodies, preparation of an ecological status report of Kerala, environmental disaster prediction-prevention and preparedness, management of e-waste, and also a review of environmental laws in India in the context of conditions and experiences in Kerala. An interesting addition to this list of projects is a cycling promotion campaign in the state, especially in the urban centres with specific campaign goals of reviving this eco-friendly transport system. "One day of every month should be 'No Motor Vehicles Day' and only cycles can be used on that day," recommends the Working Group.

The Kerala State Pollution Control Board has come under severe criticism by the WGE for its constitution and its working. The Central Pollution Control Board at the national level and State Pollution Control Board at the state level were constituted as per provisions of the Water (Prevention and Control of Pollution) Act, 1974 and the Air (Prevention and Control of Pollution) Act, 1981, the report points out. "The law contemplates constitution of a State Board with a Chairman having special knowledge/practical experience in respect of matters relating to environmental protection or a person having knowledge and experience in administering institutions dealing with the matters aforesaid," says the report. It bemoans that the present Chairman does not qualify and has called for a thorough revamping of the PCB. The nominated members also must necessarily be experts having knowledge in environmental pollution and related matters.

A state level environmental monitoring Committee consisting of non officials and officials with powers to conduct surprise inspections and examine documents of the units on receiving complaints from the public has also been recommended. The Working Group has also sought the immediate transfer of the PCB from the ministry of Health to the Department of Environment. (Quest Features & Footage)

P N Venugopal is an independent journalist based in Kochi.