Leo Saldanha and Subramanya Sastry on the threats to the Kali River from pollution and sand mining and more recently a proposal to build the seventh dam across the river's last stretch.
01 June 2003 -

On June 5th 2003, World Environment Day, representatives of the Kali Bachao Andolan are rallying in Bangalore to represent that the Chief Minister of Karnataka intervene and prevent clearances for an environmentally unsound power project on the river Kali.

In 1987, the state government decreed that no further projects involving diversion of forest land for other uses will be undertaken on Kali River or its tributaries.

The 184 kilometers long Kali River in the Uttara Kannada district of the Western Ghats region in Karnataka, already has 6 major Hydroelectric dams. In addition, the river supports the only nuclear plant in a forest in the world - the controversial Kaiga Nuclear Power Station. Over 1200 MW of power is already generated from these dams, and an additional 440 MW from Kaiga. There is now a serious attempt to build a 7th dam on the Kali River, near Dandeli, by Murdeshwar Power Corporation Limited (MPCL). 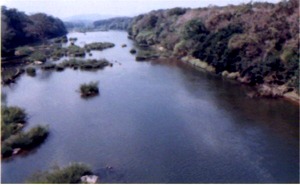 The MPCL dam is proposed to generate only 18 MW of electricity. This at the cost of submerging 210 ha of forests along the Kali. If allowed, the last flowing stretch of the Kali will be lost. Over the decades over 32,000 acres of forests have been submerged in this district to build the six dams. The last riverine stretch of forest left along the Kali would be lost forever, if the MPCL proposal were allowed. The Government claims upto 1700 MW of power can be generated from the river. However, there is very little of the river left, to dam. The MPCL dam is an incremental attempt at snuffing out what little of the river is left.

Almost all the power that is generated from the district is exported to other regions. Uttara Kannada uses only 17 MW of the electricity produced. Many parts of the region languish in darkness. Simply put, this region's cry for enough development by dams needs to be addressed. Now. At Rs. 180 crores (US $ 40 million approx.), the MPCL dam project is one of the costliest ever proposed. Some reports project the cost to be 15 times that produced by KPCL.

Legally this project has to be abandoned, for besides the cost factor, the proponent along with its consultants are guilty of presenting two fraudulent Environment Impact Assessments, one by M/s Ernst and Young, and thereafter by M/s Tata Energy Research Institute. Environment Support Group and Parisara Samrakshana Kendra exposed both frauds during 2000, and per the Environment Impact Assessment Notification, this is a case fit for rejection absolutely. Based on this expose', the Deputy Commissioner of Uttara Kannada district, on the basis of an affidavit filed by Environment Support Group, and other evidences gathered during an Environmental Public Hearing held during January 2001, has recommended that the project not be allowed.

Construction of this new dam is also a significant violation of the 19th May 1987 Government of Karnataka order (No. FFD 242 FGL 83) that no further projects involving diversion of forest land for other uses will be undertaken on Kali River or its tributaries. Recent Supreme Court decisions have upheld the spirit of this order. Furthermore, the District Forest Officer has also found that the claims of the proponent that there are no forests in the submergence area is false, for this area constitutes an assemblage of moist deciduous and evergreen forests, supporting a range of wildlife, including the occasional tiger.

All of this comes on top of a prevailing but not unfamiliar situation of recklessness. The Dandeli Paper Mills throws out large volumes of its untreated effluents into the river. For the communities who depend on this river, adverse impact of the accumulated pollutants has been tremendous. Losses in agriculture, dairy farming and fisheries are a common tale here, and cattle deaths are regularly reported. Farmers in direct contact with the water suffer from a variety of skin diseases caused due to pollution of the river.

Very little is known of the impact on wildlife. The concerned regulatory agency, the Karnataka Pollution Control Board has done very little to contain the damage, thereby allowing the Mills a free run on its polluting spree. Only recently, due to pressure from local communities under the banner of Kali Bachao Andolan, has there been some response with the local Assistant Commissioner initiating criminal proceedings against the company. The people are not demanding a closure of the Dandeli Paper Mills. Rather it is to get the mill to clean up its operations for the benefit of all - including the employees of the mill. Sand mining is of particular significance here, for it is illegal and continuing on a rampant scale in the Supa Dam area, resulting in serious disturbances to the river's ecology.

To build awareness on the threats to the Kali River, and to stop further damming and pollution, the Parisara Samrakshana Kendra (PSK), along with several local community organizations and tribal villages, have formed the Kali Bachao Andolan. Pandurang Hegde, leading the Kali Bachao Andolan, and several others conducted a Padayatra (an awareness - building and protest walk along the entire course of the river) in February this year. Sunderlal Bahuguna, leader of the Chipko Andolan, launched this Padayatra. There has been overwhelming response from local communities to this effort. At Bangalore, the Environment Support Group (ESG), a local research and advocacy NGO, supports the Kali Bachao Andolan.

The PSK and ESG, are organizing a peaceful sit-in (Dharna) to protest the destruction of the Kali River on June 5th 2003, World Environment Day. The protest will be held at 10 a.m. at the Mahatma Gandhi Memorial (M. G. Road), Bangalore. A wide variety of representatives from affected communities, including tribals, village and community organizations, fisherfolk and local NGO's from Uttara Kannada region will participate in this Dharna. Following a Rally, a memorandum will also be submitted to the Chief Minister of Karnataka and Karnataka's Minister for Environment and Forests.

In response to a letter highlighting the malaise, The Chief Minister's office has indicated that a public hearing may be held on the matter. However, it's too early to draw any conclusions from that response since no concrete steps have been outlined by the state government.

The authors are with the Environment Support Group, a Bangalore-based non-government, research and advocacy organization.