Democracy in the deep woods

In mineral-rich lands, adivasis still find it hard to make ends meet. Violence between the state and Naxals threatens to divide and disenfranchise them further. Freny Manecksha reports.
10 April 2010 -

The Bailadilla range is one of the world's richest and largest sources of iron ore. At Kirandul, where the National Mineral Development Corporation (NMDC) has been operating two mines since 1961, the ore is extracted and then loaded on to railway trucks bound for Visakhapatnam. The iron dust which remains is taken by Essar through a 267-km long pipeline to its Visakhapatnam factory where it is converted into pellets and exported. Profits to the tune of hundreds of crores annually flow through the pipeline - or more correctly, they did until last year, when Maoists breached it near Visakhapatnam.

Adjoining these projects is the Kuakonda Block but in its mineral-rich lands the adivasis there still find it a huge challenge to earn enough to provide for their families. Like everywhere in India, they inhabit a land that is full of economic potential, but their own lot is filled with misery. In Kuakonda, despite the mines, the adivasis' mainstay is agriculture, and their livelihood is only occasionally augmented by "coolie work" allotted by contractors who throng Kirandul.

Lost in the woods

The Central Reserve Police Force (CRPF) patrols these lands for the protection of the inhabitants. But often the CRPF men, who are usually from other parts of India with very little knowledge of local conditions and society, do not know who the enemy is, and who it should be protecting. About a year and a half ago two young men from a pada (hamlet) of Samalwar were killed and two were imprisoned on the grounds that they were Maoists. But Samalwar's villagers tell a different story. They say the men were out rounding up cattle when the CRPF fired upon them in the evening hours. Two men - Nanda and Chhanu - died immediately, and two others - Somru and Meshra - received bullet injuries but managed to run away.

There is yet another version of this story. The men were desperate because of drought and dwindling work, and had gone to Kirandul to pilfer iron scrap from the yard. They were not branded as thieves but as dangerous "Naxalis". The story has not ended yet, as the case is in the High Court but in its subtext lie the complex realities of what is really happening to adivasis in Chhatisgarh. Appropriation of tribal assets. Promises made but never kept. Deprivation amidst development. Desperation and displacement in a state that was carved out to protect their interests.

Adivasi displacement began way back - when forest rules turned them into encroachers in their own habitat. They were at the mercy of forest officials. Their main source of income - collection of tendu leaves - was controlled by contractors who ran the business. It was the Maoists who helped them deal with forest officials and raised the price of tendu leaves, and this intervention enabled them to gain a foothold in the state. In 2005 the Maoists called for a strike in tendu collection to thwart the government's bid to do away with contractors and start cooperatives. This led to some adivasi resentment and the counter-Maoist Salwa Judum (peace march) was born. 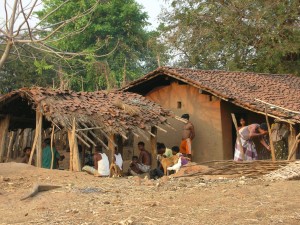 Although the mining industry around them is booming, adivasis remain cut off from its opportunities - and rely still mainly on agriculture for their livelihoods.

The state describes it as a "spontaneous, self-initiated, peaceful people's movement." But this is at variance with what several Murya adivasis (known as Ghoti Khoyas in Andhra Pradesh) told us when we met them in the hamlets of Kukunoor Block, Khammam district of Andhra Pradesh where they have sought refuge. Asked why they fled their homes many answered with one word - Judum. Several of them testified to the reign of terror let loose by the Salwa Judum working in tandem with state security forces.

Muchatridesa of Velpocha village narrated how his 18- year-old-brother, Marakum Sana, was killed along with another adivasi whilst they were fishing in a pond. Later security forces arrived in a helicopter and proclaimed Marakum Sana to be a Maoist.

Devi spoke of the terror unleashed by the Salwa Judum in Gattapada village as they killed three men even as the aged mother of one of them begged for her son's life. "Take my bullocks, take my cattle," she implored but they did not listen. The men were taken away and killed in the thick forests towards Golapalli.

She is at a loss to explain why the Salwa Judum, an adivasi outfit, should have unleashed so much terror on its own people. Political observers say that violence is an intrinsic part of its matrix. A veteran CPI leader, who has been in the state for four decades and can recall the days when the forests were dense in Kirandul explains. "Some adivasis who had learnt the language of might under the Maoists began flexing muscle and challenging Maoist leadership. In 2005, after a disastrous drought, word was spread that it was the Maoists who were behind all tribal woes. Mahendra Karma, the fiery leader who had been expelled from the CPI and who then joined the Congress, found it an appropriate time to seize leadership. It was also an opportune time for the most wanted men to become leaders - those who were wanted by the police and those who were wanted by the Maoists. Those who had lived in fear of being hunted down by the police could now walk freely along with the police."

With us, or against us

It was after the birth of the Salwa Judum that another phenomenon began taking place - the setting up of camps in Dantewada and Bijapur districts to house displaced villagers.

The Collector of Dantewada, Rina Kangale says these camps were constructed after 2004 following an increase in Naxal violence. "Some 30-35 per cent of villages in the district were beyond the reach of the government and it was decided to move the administrative machinery out of these and resettle villagers in camps. They were provided with free housing, electricity and initially given free foodgrains. Currently they get rice for Rs.2 per kilogram. NREG works are being undertaken. Schools have been established and the camps are protected by the CRPF." (The Maoists blasted several schools on the grounds they were being used to house security forces.)

Kangale admits there is some resistance on the part of the villagers to leave their lands and be resettled, but the administration had no choice given the level of Maoist violence. Even so it is one of the great conundrums of Chhatisgarh - that camps set up ostensibly for adivasi safety and security became the raison d'etre for huge oppressive tactics by the Salwa Judum and led to further displacement with thousands even fleeing the state. 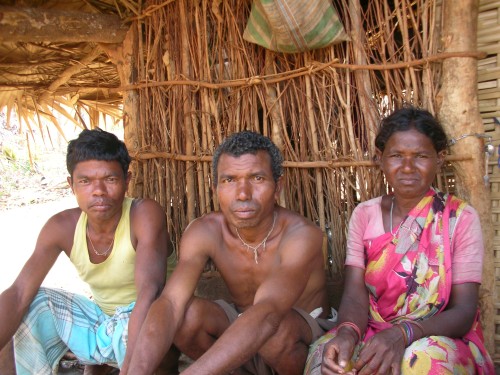 These Murya tribals have sought refuge from the violence in the hamlets of Andhra Pradesh. They say they will not go back home.

Madvi Dewa of Singhawara village (now residing in Andhra Pradesh) spoke of the forcible evictions and how Salwa Judum members beat up the villagers and carted several of them away to Dantewada jail. "They did not interrogate us. They just took so many of our people away." Did the villagers make any attempt to lodge a complaint, I ask? "No, how could we? It was the sarkar that was beating us up so where could we lodge any complaint?"

The Chhatisgarh government has openly declared that those in the camps are with the government and those in the forests are with the Maoists, thereby accentuating a divide among the adivasi fold. Echoing this standpoint is Amresh Mishra, Superintendent of Police of Dantewada district, who in his interview to me declared that once a government order has been given to villagers to move out; anyone who stays behind will be viewed as a Maoist or Maoist sympathizer. "He has no business to be there. Only those who want to take us headlong will stay on."

But ironically in some camps there is a reversal taking place. At Cherpal, I saw row upon row of locked houses. Many of the inmates, I was told, had elected to go back to their village Kutur because they had been given no work. I asked one inmate who had stayed back because he runs his own small tailoring business, "Why did you leave your village?" "It was a time of great fear. We went mad with terror fearing both (that is the Salwa Judum and the Maoists). But now we know "ghar ghar hi hota hai" (There is no place like home).

He is lucky to be able to make the choice. For many others, like Vaikkosukda of Amapenta village who is now settled in Andhra Pradesh, there is no going back. Having managed to save himself from the Salwa Judum's clutches he declares that he will do any kind of "coolie" work rather than risk his life and freedom in Chhatisgarh.