In the aftermath of a hooch tragedy

In a terrible, but not-so-rare tragedy in rural West Bengal, 170 people lost their lives after consuming illicit liquor. But what actually happens after an incident such as this? Cholai, a well-researched black comedy, reveals the moral and social degradation that cuts across spheres, writes Shoma Chatterji.
14 March 2016 -

To make a film based on real life -- especially on a tragedy of immense proportions, which unfolds layers of corruption at every level – is more than challenging, it is almost impossible. This problem becomes all the more acute where the government is involved, either negatively or positively or both.

A collective tragedy results in a large number of deaths and reveals continued state negligence of corrupt practices. On the positive side, however, the government wakes up to the tragedy and officially announces a compensation for the families of the victims after the event. All this and much more is brought across with caustic comic touches in a feature film called Cholai, directed by Arun Roy.

The Bengali word cholai means hooch, or illicit or spurious liquor which can well kill, if the proportion of the pesticide/chemical used to contaminate the liquor in order to reduce the cost and make it affordable is high. Pure liquor is expensive and bootleggers cannot afford to either make or sell it at a high price in the village economy; this led to the tragedy depicted in the film and other similar hooch tragedies, where such liquor is sold at an average price as low as Rs.5 a packet. Roy elaborates on this with precision because he has lived with these people for several months at a stretch before beginning to shoot the film.

Spurious liquor is brewed in obscure places. It does not attract taxes or duties and since it is done clandestinely, there is no quality control. Illicit brewing is absolutely unscientific, crude and lacking in minimum hygiene in preparation, dispensation and storage. Hooch brewers, mostly semi-literate or illiterate, often mix excessive amounts of methanol/pesticide in the liquor, leading to mass deaths. Law enforcers are aware of this underhand business, but they pretend it does not exist and either look away or make it one more way to access their regular ‘haftas’ (extortion money).

Cholai is not just about how the tragedy occurs. It is more importantly about the Rs 2-lakh compensation announced by the state government to be paid to the family of each victim, but which did not actually reach them. 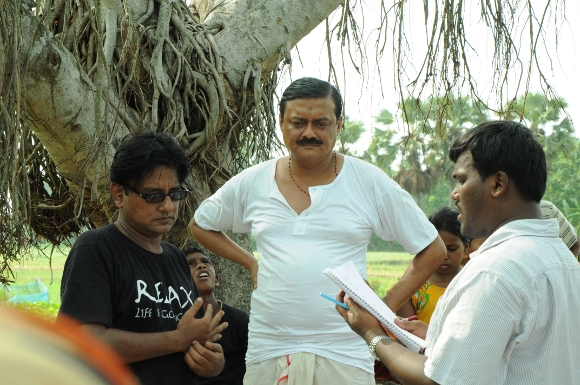 Director Arun Roy with actor Saswata Chatterjee and a crew member on the sets of Cholai. Pic: Arun Roy

The film is inspired by a real incident, where a batch of country liquor sold to rickshaw drivers and poor leather workers in 10 villages in and around Mograhat and Mandirbazar in South 24-Parganas and Sangrampur in West Bengal in December 2011 killed more than 170 people. The liquor had been adulterated with methanol. Known locally as cholai, it is believed to be produced by a local Muslim 'mafia' and sold to poor labourers in local shops for as little as five rupees for a half litre 'pouch'.

There are other sub-plots that smoothly blend into the screenplay show in a subtle way how greed, sibling rivalry and lust for fame and money plays a destructive role and ends up manipulating, controlling and destroying relationships.

Cholai was cleared by the censor board recently without a single cut but with an “A” rating, obviously because of the language used in the film that is filled with profanities in the local dialect. Roy and the producer has entered it for the National Awards too. A private screening was organized for a few press people in order to be able to preview the film. I had the good fortune of having watched the film at this preview.

Roy says, “I was waiting for an original idea for my second film, after my maiden full-length feature film Egaro (Eleven) – a celluloid reconstruction of Mohan Bagan’s historic win at the prestigious IFA Shield against its British opponents, East Yorkshire Regiment on 29 July 1911. I readied eight full scripts, each one distinctly different from the rest but finally struck upon Cholai. I researched the subject for seven to eight months travelling through Mograhat, Canning and Laxmikantapur to internalise the lifestyle, the language, the manner of these poor villagers engaged in the business, sometimes along with their wives and grown children.”

The film maker lived with some of the families who were distilling spurious liquor, learnt how to make it and even drank cholai in order to blend himself into their ‘mainstream’ and to get a grasp over a subject that he did not know much about in the first place. During the three months spent in their midst, “I learnt the dialect – Dokhno – they converse in; four-letter words and profanity are a part of their everyday language, used by husband, wife and small kids casually; they do not feel these are dirty slangs or abusive. They do not know that this is ‘slang’ because it is a part of their regular vocabulary,” he recalls.

“My documentary research through newspaper clippings, reports etc took another seven to eight months till I settled down to put together my cast and crew. But the biggest hurdle was to fictionalize the names so that they could not be identified by the powers-that-be,” explains Roy.

The real kingpin who confessed that he headed the entire business and that the poor distillers were his workers is a person whose real name Roy has changed to Nata Badshah. Roy also made improvisations and innovations in Nata’s family so that there are no legal hassles post-release. The village also has a different name and the actors are either local or drawn from theatre groups that add to the credibility of the film as there is no “star face” that imposes itself on the character. 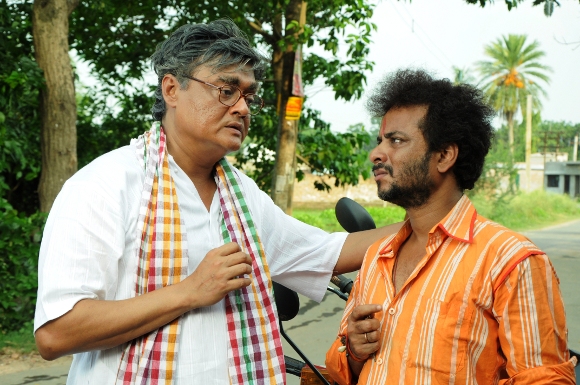 Saswata Chatterjee and Parthasarathi Chakraborty in a still from the movie. Pic: Arun Roy

Though this sounds absolutely bizarre, cold-blooded and brutal, the fun begins soon after the deaths, as the satire and the scathing sarcasm brought out through small sub-plots and cameos make the film extremely entertaining. Even before the compensation of two lakh rupees is announced, the village priest tries to extract money for the funeral rites, the cremation workers demand a high rate for cremation and the camera tracks to take a mid-shot of the collective burning of dead bodies on an open field. The village barber, whose presence is mandatory when people die, tries to extract his own pound of flesh.

Once the compensation is officially announced, the doctor asks for Rs 5000 to issue each death certificate, an agent peeps in and tells the doctor that he will take a cut of Rs 1000 for each patient’s family he brings in for the certificate. The Panchayat asks the councillor to tell the villagers to gather Rs 10000 and hand it over to the Panchayat for organizing a procession! The Councillor, on his part, adds his own demand of Rs.5000 to this Rs.10000.

All this happens even before a single paisa of the compensation money has reached any family of any victim. The local medical centre has to put up 40 patients crammed in 20 beds with four paramedical and fourth class staff in all. Those who cannot be accommodated lie vomiting in the courtyard and keep dying.

One victim does not die and is sent back home. His wife and son are very sad because they will not get the compensation money. There is one scene where two families are fighting over a corpse in the crematorium, each claiming that this is a member of their family to claim the compensation. Some dead bodies have been cremated without a certificate and the doctor makes hay while certificates are manufactured in exchange for you-know-what.

Small scenes of comic satire are woven into the script filled with pithy and caustic dialogue that reflect the character of small pockets of a larger society. Roy even attacks the media with barbs by capturing news reporters of news channels asking stupid questions to elicit equally stupid answers from the general public.

Subhomoy Chatterjee’s dialogue is a winner all the way. The music, entirely on the soundtrack composed by Mayookh and Moinak is ideally low-key and enriches instead of disturbing the flow of the narrative.  The make-up, the costume, the ‘look’ of the village and the villagers, the production design, if there was any, is stripped completely of glamour and artifice of any kind and this adds to the film’s statement.

Sankalpa Bhowmick had a tough job as editor, cutting and switching and chopping from one shot to the next without losing continuity of the story.

There is a scene that captures a tea-shop in the village where some elder members congregate for an adda and their regular cuppa. There is a portrait of Rabindranath Tagore hanging on a wall. But no one can recognise the poet in the portrait and come out with hilarious names! This peppering of a real tragedy with humour does not dilute the seriousness of the subject but instead, offers the viewer a ring-side view of the changing face of moral and cultural values in the villages of West Bengal.

“We are sick and tired of hearing that the villages are much better off and that villagers are more naïve, honest and straightforward than city people. I do not agree. Corruption, malice, greed are negative values that have cut across all sections of humanity in the country today and Cholai just upholds one example,” says Roy.

Almost the entire film was shot on location in Nepalgunge, 40 km away from Kolkata. Roy organized a workshop for the entire cast for a month so that the actors could learn the dokhno dialect. My actors would gather everyday and get onto a train to imbibe the finer cadences of the dialect and to get used to the village ambience. “The vocabulary is different even in delivery of lines – in terms of tone, pitch, framing of sentences, forms of address, everything,” says Roy.

What makes Roy venture into making challenging, out-of-the-box films like Egaro and Cholai?  “For me, the making of a film is a weapon that helps me communicate with the masses to project my point of view, which is completely distanced from the mainstream,” Roy sums up. If the three basic functions of cinema are to inform, educate and entertain, then Cholai can easily be taken as an ideal model.