The States of India account for about 55 per cent of the combined expenditure of the Union and the States, but the Centre now collects two-thirds of the combined tax revenues. Kannan Kasturi details this imbalance.
08 September 2010 -

The financial power of the Union and States derives from the Constitution of India. The seventh schedule spells out in Union and State lists the subjects that are the exclusive domain of each level of government for making laws, and, by implication, for raising revenues & incurring expenditure. Taxes also find explicit mention in these two lists. A third list - the concurrent list - contains subjects where both Union and State governments can enact laws. The Union has the 'residuary powers' - that is, exclusive powers to make laws (and collect revenues) on all subjects that do not find an explicit mention in any of the lists.

Deriving from these, powers, the Centre and the States each have instituted a variety of taxes, fees, levies, and other charges that generate their respective revenues. The Union Government can tax personal income and corporate profits and tax manufacture and exports-imports through excise and customs duties. It exercised its residuary powers in 2000 to additionally tax services. States can collect land revenue, taxes on sale or purchase of goods (sales tax, now VAT), manufacture of some items (state excise), collect stamps and registration fees and taxes on vehicles, goods & passengers, petrol & diesel and electricity. These are, of course, only the major taxes of the States.

Both levels of government can collect royalty on extraction and use of natural resources in their control, charge users for services, and obtain dividends from profitable public sector enterprises, these revenues being collectively termed non-tax revenues. The states control natural resources like water, forests, & minerals while the union controls resources such as offshore petroleum and telecom spectrum.

Why have states not been able to generate revenues to keep up with their expenditures?

One reason, it seems, is that the states' non-tax revenues have not kept pace with tax revenues. The share of non-tax revenues in the overall revenue collection has continuously fallen. In the early 50s, non-tax revenues were significant and accounted for 1/3rd of the revenue collected; now their share is less than 1/5th. However, even more revealing are the numbers showing non-tax revenue falling over the years as a percentage of GDP. The revenues are now almost entirely composed of user charges levied for government services. The 'Departmental Commercial Undertakings' that exploit the natural resources are loss-making with the sole exception of mines and minerals. Even here, the royalty from mining was only about Rs.3300 crores in 2007-08. Greater public scrutiny on how states allow the exploitation of their natural resources is clearly called for.

A second reason lies in the nature of state taxes. Different taxes react differently to the prevailing mode of economic development. The main direct tax levied by the states - land revenue - grew until the mid fifties and then dried up. States have since then been left with only indirect taxes as major sources of revenue. The following table is illustrative of the different responses of direct and indirect taxes to the current pattern of economic development.

The period 2003-08 was one of rapid GDP growth. During this period, union taxes showed a rapid increase from 9.2% to 12.6 per cent of the GDP. On the other hand, State taxes moved up only from 5.6 per cent to 6.2 per cent of GDP. This is because corporation and income taxes, which are collected by the Centre, have been far more buoyant in the current phase of GDP growth than taxes on sales or manufacturing, which are collected by the States. This lower buoyancy of state taxes is then another contributing factor to the expenditure gap.

In contrast to the states, the union not only has the buoyant taxes, but also an easier tax administration. While state taxes involve monitoring a large number of points of sale, union taxpayers are smaller in number and more manageable. Again, while the union has 'residual powers' that it to impose new taxes in areas not spelt out in the union list of the Constitution, the states are bound by the subject-charges specified in the State list leaving them with no such flexibility.

The asymmetry in tax collection and expenditure - where the union now collects 2/3rd of the combined tax revenues while the states account for about 55% of combined expenditure, termed 'vertical imbalance' - is inbuilt into the design of the Indian federal structure. This imbalance dates back not just to the framing of the Constitution but even earlier into the colonial period.

The current division of revenue powers and expenditure responsibilities between the states and the union is traceable to the 1930s. The colonial administrations' experiments with different models of revenue-sharing culminated in the Government of India Act 1935. The Act had a Seventh Schedule, which specified the division of subject-charges (including taxation powers) between the two levels of government in Federal, Provincial, and Concurrent legislative lists. With the vertical imbalance between the Provinces and the Federation already apparent, the Act mandated the transfer of a portion of Federal taxes to the Provinces and provided for additional 'grants in aid' for Provinces that were in need, the specifics to be as prescribed by 'His Majesty in Council'.

The intent of the transfers was to close the gap in the States' revenue budgets. However, since States could overstate their requirements, projections for 'reasonable' expenditure were based mainly on historical expenditure trends. In the years leading up to 1947, a process was already in place to fix, for five years at a time, the share of federal taxes to be given to the provinces and a formula for distributing the overall kitty among the provinces. The Constitution of India adopted the division of subject responsibilities as well as the provisions for distribution of revenue between the federation and the federal units in the Government of India Act 1935.

The Constitution provides for the constitution of the Finance Commission (FC) every 5 years to recommend tax-sharing between the union and the states, as well as 'grants in aid' for States. While recognizing that States have a right to a share in Union taxes, it leaves the real issue of 'how large a share' to the Finance Commission, a body, no doubt having Constitutional protections and obligations, but constituted by the Union Government, an interested party.

In the Constitutional division of responsibilities, the states have most of the functions that have a direct bearing on the wellbeing of the people in general, and of the poor in particular who depend overwhelmingly on public services. Urban & rural local governments, law & order, roads, water supply, electricity, irrigation & agricultural marketing are some of its functions. So also are the public distribution system, hospitals & primary health centers, schools & technical training institutes. Adequate tax transfers to the State governments would be crucial for them to deliver on these fronts. 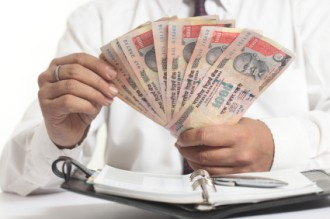 Vertical imbalance is inbuilt into the design of the Indian federal structure. This imbalance dates back not just to the framing of the Constitution but even earlier into the colonial period.

The Constitution however is silent on the principles on which the FC should base its decisions. Finance Commissions have generally maintained continuity in their recommendations with past transfers. This is equally true of the first few FCs, who maintained continuity with the pre 1947 disposition. The First FC recommended transfer of 55 per cent of income tax revenues to the states compared to the then-existing 50 per cent share. Successive commissions have marginally increased the tax share of the states to account for the lower buoyancy of state taxes. The 11th, 12th, and 13th FCs have recommended shares of 29.5, 30.5, and 32 per cent of the union's gross tax collections for the states respectively.

Starting with the award of the 7th Finance Commission (1980-85), States have been getting a little over 50 per cent of the combined (state & union) tax revenues.

The gap between revenue (including the States' share of Union taxes) and expenditure is filled by the Union through grants. In the last few years, grants have amounted to nearly 19 per cent of States' revenue receipts. Grants come under two broad heads. The Constitution empowers the FC to decide on 'grants in aid' to States in need. From a sparingly used provision to aid some states in need, this now covers all States and a variety of purposes including the financing of urban & rural local bodies. Grants are also made on the recommendations of the Planning Commission as well as directly by Central Ministries. There are grants for State Plans, for Central Plan schemes, for Centrally Sponsored Schemes (CSS) and for schemes outside the plans. There were 99 Centrally Sponsored Schemes in operation in 2007-08; the number will have risen since. A prominent recommendation of the 13th FC is that the Union Government should reduce the number of CSSs.

Grants, although they bring in much-needed money for development expenditure, are unpopular with the States. Most grants are for specified purposes, come with attached conditions, and have long-term expenditure implications for the states. (A discussion on the problems caused to States by grants can be found here.)

Looking at the operation of the Constitutional provisions for revenue sharing between the Union and States over the last 60 years, two things stand out. The 'vertical imbalance' that was present at the time of independence has actually deteriorated in favour of the Union, leaving the States with a large revenue gap. The Union has used this situation and the flexibility of Constitutional revenue sharing provisions to provide States with conditional grants instead of their rightful share of taxes, thereby dictating the expenditure of States in areas that are function of the states.

A government answerable to the electorate needs the flexibility to raise revenue and prioritise expenditure. The states of the Indian Union are in an unenviable position on both counts. Given that it is an era of coalition governments, it makes one wonder why regional parties have not come together and exerted greater pressure on the Union to protect the interests of the second tier of government.