A broad vision for a better experience

Four goals, five drivers and 11 thrust areas formed the framework for Suresh Prabhu’s railway budget, otherwise shorn of big ticket announcements or details about the nitty gritty of execution. Here’s a look at some key announcements in the Budget speech.
26 February 2015 -

No new trains! A thrust on improvements in the existing network, through an investment of over Rs 1 lakh crore during 2015-16 and over Rs 8.5 lakh crore over the next five years, without any corresponding passenger fare hike is what distinguished the first railway budget under the Narendra Modi-led government, presented by the Union Railway Minister Suresh Prabhu.

Modernisation of infrastructure, upgrading of passenger facilities and amenities, and strengthening of safety received strong emphasis in the budget which sought to make “Indian Railways a benchmark organisation in safety, security and infrastructure.”

Markets however have not responded positively to Prabhu’s budget presumably because of his safe play in keeping passenger fares unchanged while stressing on the need for higher investments and improvements in operating ratio. The Opposition has also criticised the Budget for lacking specifics on how it will realise its ambitious plans of transformation.

The four broad goals sought to be achieved through the transformation are improved customer experience, safer travel, modern infrastructure and financial self-sustainability.

a) adoption of a medium-term perspective,

d) a revamp of management practices, systems, processes and re-tooling of human resources

Some of the most important proposals that may be expected to have a real impact on the Railways experience as a whole are as follows.

‘Operation Five Minutes’ will ensure that a passenger travelling unreserved can purchase a ticket within five minutes of entering a station. Provision of modified ‘hot-buttons’, coin vending machines and ‘single destination teller’ windows will reduce the transaction time.

The pilot project of issuing unreserved tickets on smart phones - that has already been launched in Central Railway, Western Railway and Southern Railway suburban sections, is hoped to be extended progressively to all stations.

Automatic ticket vending machines with smart cards and currency options have also been installed at many stations. It is proposed to proliferate this further and introduce debit card operated machines.

Advance bookings can now be made 120 days in advance instead of 60 days, which is expected to help tackle the tout menace.

Prabhu said that ensuring higher standards of cleanliness was of utmost priority for Indian Railways and that ‘Swachh Rail’ could be the driving force behind the government’s flagship ‘Swachh Bharat Abhiyan’.

The Railways proposes to create a new department for keeping stations and trains clean. Integrated cleaning will be taken up as a specialized activity, which will include engaging professional agencies and also training staff in the latest cleaning practices.

‘Waste to energy’ conversion plants would be set up near major coaching terminals to dispose of waste in an environment-friendly manner.

The Railways will build new toilets covering 650 additional stations compared to 120 stations last year. Bio-toilets are being fitted in coaches. He said, so far the Railways has replaced 17,388 existing toilets with bio toilets. This year it intends to replace another 17,000 toilets.

The feasibility of a disposable bag along with bedroll for the purpose of collecting their garbage is being considered. The coverage of built in dustbins will be extended to non-AC coaches as well. 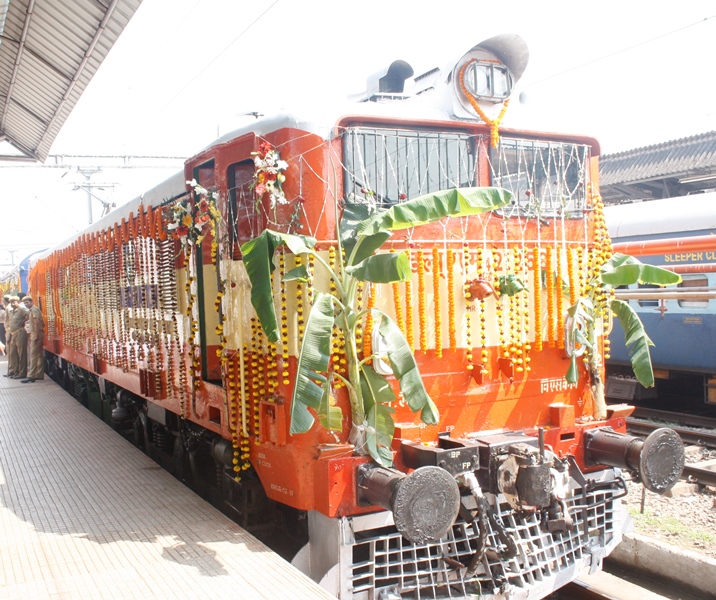 970 Road over bridges/Road under bridges (ROB/RUBs) and other safety-related works have been sanctioned with a view to eliminating 3438 level crossings at a total cost of Rs 6,581 crore.

ISRO and IIT Kanpur will be involved in projects to develop sophisticated systems for warning at unmanned level crossings.

A Train Protection Warning System and a Train Collision Avoidance System are proposed to be installed on select routes at the earliest.

The Research Design and Standards Organisation(RDSO) under the Ministry of Railways has been asked to develop systems that will prevent fire in coaches and also prevent coaches from climbing over each other during accidents.

Two helpline numbers will become functional: 138 for attending to the grievances of passengers on a real time basis and 182 for security-related complaints.

Indian Railways will utilise resources from the Nirbhaya Fund for augmenting security of women passengers. Surveillance cameras will be installed on a pilot basis in select mainline coaches and ladies’ compartments in suburban trains.

Lifts and escalators have been planned at major stations to facilitate easy movement of the elderly and differently-abled passengers.

All newly manufactured coaches will henceforth be Braille enabled and Rail Coach Factory has been asked to explore the possibility of building wider entrances for the ease of differently-abled passengers.

The National Institute of Design (NID) has been approached to design user-friendly ladders used for climbing upper berths. Indian Railways is also collaborating with NID to develop ergonomically designed seats.

A facility for online booking of wheel chairs upon payment through IRCTC has been proposed with an eye on senior citizens, patients and differently-abled passengers. This will initially be implemented in select stations.