Pracharak to politician, and now, activist

K N Govindacharya, the pracharak-turned-politician who led the Bharatiya Janata Party into power in the 1999 elections, is today a staunch campaigner against the politics and economics of globalization. He now promotes swadeshi development and says he has renounced party politics. N P Chekkutty caught up with Govindacharya.
26 January 2005 -

The great debate over globalization has divided Indian politics into two powerful camps, those who oppose the process because of its social and economic impacts and those who firmly believe that it would help the country regain its strength and prove to be the engine of economic resurgence. This debate has also divided most political parties with the two camps cutting across party lines. The two major national parties, the Congress and the BJP, have votaries of both approaches among their ranks. 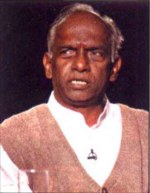 K N Govindacharya is the pracharak-turned-politician who led the Bharatiya Janata Party into the corridors of power in the 1999 elections. He was the tallest theoretician of the Hindutva philosophy and as a shrewd tactician, he cobbled together the winning alliance. Today, he is a staunch campaigner against the politics and economics of globalization and has renounced party politics.

Govindacharya has launched a new movement across the country based on grassroots level action, building up a network of local organizations with an eye on a swadeshi model for development. Once the leading light of the BJP, he now shuns the glare of media and tours the country, developing voluntary networks in his struggle against the forces of globalization which, he says, have completely manipulated those in power.

These forces have taken over our society and administration and we have no option but to fight it with our own national resources, says Govindacharya, asserting that even the Vajpayee Government had failed to withstand these powers. He says that in order to fight the forces of globalization, the country needs a strong movement to defend its national interests. He also asserts he would join hands with activists like Medha Patkar and political forces like the Communist parties, despite his differences with them over ideology.

Govindacharya spoke to me at length at his Delhi residence recently, on his way from Madhya Pradesh to a West Bengal meeting his supporters in various states.

Excerpts from the interview

You have been keeping away from electoral politics now and kept away from the recent elections (2004). Why?

Elections are not the right occasion when we could hope for a national debate on critical issues. Elections are simply a matter of images, and these ephemeral images mould the public mood and hence there is no scope for any substantive debate at all.

But you too were part of this political system. You think you wasted time?

No. I only tell you that elections have their own grammar and you cant expect a public debate on issues of real national concern during these times when specific images and signals decide things. For example, there were polls in the past which were swept on single issues like the slogan garibi hatao and in this election they were harping on this India Shining image.

Are you now fed up with parliamentary politics like our old Communists who used to say bourgeois politics is to be shunned?

"I dont think that social transformation is the cup of tea of political parties. That is why I had to leave politics and take a different course."

No, I did not say so. What I said is that all systems have their own uniqueness, their own limitations and handicaps. The political parties also suffer from them. I dont think that social transformation is the cup of tea of political parties. That is why I had to leave politics and take a different course. Also, I have a feeling that India is such a vast civilization that only the state cant be the decisive force, there are much more important factors, say the religious and spiritual leadership, the economic leadership.

You knew these limitations, but still you took to politics. Why?

I was an RSS pracharak and I was asked to go to politics. As a pracharak, I had to accept it.

Now you regret it?

No, no regrets. Only I feel I can do better elsewhere. That is why I decided two years ago not to be a member of any party. And also I have renounced my position as pracharak of RSS and now as swayamsevak, I can pursue my own lifes visions.

You have been going all over the country for the past few years studying the impact of globalization policies. What did you learn?

If we have to counter globalization, we will have to go for alternative policies, policies rooted in our life experiences, based on the concept of decentralization and localization. We will have to move forward to a new kind of technology based on low cost, low capital and more labour intensive ones. It is a new economic model, a model that will focus on our rural life, on our agricultural sector.

We have some examples of decentralization, like those in Madhya Pradesh and Kerala. Do you accept them?

These models actually ended up as extensions of the government departments, while they were supposed to overcome them. They failed to confer real power to the panchayats and also they became mere replicas of the present system of partisan politics. If they have to succeed, they must shun this 49:51 system of vote division and move onto a more consensual method where all sections do have a share in the affairs of the panchayat.

Do you accept the call for more foreign direct investment?

No, they wont do us any good. All these come with strings and remember, for every dollar they invest, they expect at least three dollars in return.

But surely, there is a consensus across the Indian political spectrum that we should continue with these policies?

Yes. But the political spectrum is limited to only 25 per cent of our Indian population. For them, 75 percent of our people simply do not exist.

Politics is subject to the dictates of its own grammar, and it is based on power and glamour. One cant make oneself free there. Here, lifestyle is the key as well as the shield. A voluntary acceptance of a lifestyle rejecting the comforts of power politics is a prerequisite to be in a position to see our society in its entirety, to break free these shackles of an elitist system.

So you are practically disillusioned with our system of politics?

It is not a case of being disillusioned. I realize the limitations of power politics. I knew it even when I joined it, but I was asked to work there by my organization. As a pracharak I had no special likes or dislikes; one should not have any attachment to anything.

So perhaps, the RSS was wrong in sending you to an area where you did not fit in?

It is neither that. RSS is right in its assessment that there is still scope for national reconstruction through political action, though it is not all.

You are not happy with power politics now. But how do you evaluate the performance of the Vajpayee Government which you helped set up?

That government has been following the same policies that various governments pursued in the past 15 years with the same results. It has resulted in a rise in poverty, a reduction in employment opportunities and the disparity between the rich and the poor had only increased.

So it has failed in its promises?

"A lifestyle rejecting the comforts of power politics is a prerequisite to be in a position to see our society in its entirety, to break free these shackles of an elitist system."

I am not singling out any particular government for the blame, because if I did, it would mean I am exonerating all others. I dont want to do that. In fact, I feel all political parties in this country are responsible for this sad situation. Governments, on their own, cant change the situation. I feel that the people must galvanize themselves to protect their own interests. There is no other way.

As for your concerns against the impact of globalization, it is clear that activists like Medha Patkar and political parties like Communists would share these concerns. Will you join hands with them?

On issues, I will. When issues of national concern are on the agenda there is no scope for schisms. Of course I do not share the ethos or ideas of the Communists, but it would not stop me from working together on major concerns of the people.

N P Chekkutty is a New Delhi-based journalist. He has formerly been director of news and current affairs at Kairali TV and chief reporter for the Indian Express at Kozhikode.