The Supreme Court's order on the removal of tinted films from vehicles is being implemented across the country, amidst complaints from the public. Navya P K reports.
19 June 2012 -

On 27 April this year, Supreme Court passed an order banning the use of films on glasses of all vehicles. The order had said that it would come into effect starting from 4 May. Many cities have already started implementing the rule while others have given more time, especially to public transport vehicles, to get films removed from their vehicles.

In Pune, traffic police began enforcing the rule on 5 May itself. The penalty is Rs.100 for the first offence, and Rs.300 for subsequent offences. But initially the enforcement has not been vigorous, and the police had fined only about 1000 offenders by early June. "There are many vehicles that still have glasses. We fine them and remove films on the spot," says Vishwas Pandhere, DCP (Traffic), Pune. The numbers are much higher in Chennai, where over 20,000 people had been fined within weeks of the ruling.

S Shivanandan, DCP (Traffic) in Chennai, says, "We got orders to implement the rule from 20 May. Since then every day we have fined around 2000 people. Some eight lakh vehicles are affected by the rule in the city. People do not remove the film themselves, so we are holding awareness campaigns." Maharashtra also started implementing the rule late, only on 15 May.

In Bangalore, traffic police had given time to the public till 5 June to comply with the order. The initial deadline was 19 May, which was extended because of public demand. From 10-19 May Bangalore Traffic Police itself had set up 10 centres where the public could go and get their films removed for free. At these centres, traffic police officers used to remove the films themselves. Since private garages were charging as much as Rs.350-500 for this service, the demand at these centres was much higher than the police could meet. Many of these centres would have hundreds of vehicles everyday, and only around 10 officials to remove the films.

A officer at Adugodi traffic police station in Bangalore said, on condition of anonymity, "Some 100-200 vehicles used to come daily, and there were only 7-8 officers to work on them." The overworked cops used to seek help from others. In Indiranagar BDA Complex, one of the BTP centres, workers from shops in the complex used to remove the films and charge Rs 50-100 per car. Garages did brisk business, because of the crowded traffic centres. According to the Transport department, there are about 7 lakh cars in the city, and 98 per cent of them have films on glasses.

There are some who manage to remove the films themselves. Sooraj, a manager at a multinational firm, says, "It takes about an hour to remove the film yourself, especially if the car is new. The three garages that I checked were charging Rs.250, Rs.350 and Rs.500." Automotive websites also have Do-It-Yourself instructions on removing films.

"Violating VLT (Visual Light Transmission) rule is a minor offence. Police will get the film removed from the vehicle. If an offender is caught for the third time, his license can be suspended," says M A Saleem, Additional Commissioner of Police (Traffic), Bangalore. In addition to traffic police, RTOs in Bangalore will also enforce the rule through their squads.

What does the judgment say?

The ruling from the Supreme Court totally bars the use of any film, of whatever visible transmission. The order, however, allows vehicles to have tinted glass fitted by manufacturers. For existing film users, many of whom have spent thousands of rupees getting the films installed on their windows and windscreens, the only option available now is to change the glass altogether, a much more expensive proposition. Those buying new cars make choose models with tinted windows, but for the majority of the vehicles on the road, the effect of the ruling will be a return to plain, untinted glass.

The ruling was made in a public interest litigation filed by Avishek Goenka, who had sought the ban on black films saying their use aids crimes like kidnapping, sexual assault and terrorist acts. Tinting also increases the risk of accidents, he said. The central Motor Vehicle Rules, 1989, already defines VLT allowed for vehicles. VLT indicates the amount of light that can pass through glass; higher the VLT, higher will be visibility. Rule 100 of MV Rules say that front and rear glasses should have VLT of at least 70 per cent, while side glasses should have at least 50 per cent VLT.

In the petition, Goenka had challenged the MV Rule itself, saying all vehicles should have 100 per cent VLT. He submitted RTI replies from police departments in some states, who opined that black films should be banned since they aid crimes and help criminals hide during inspection at police check points. 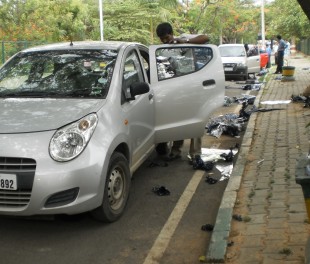 The apex court interpreted Rule 100 of the Motor Vehicles Act to say that only a manufacturer can make tinted glasses of specified VLT and that VLT cannot be altered thereafter.

The apex court said that it did not have the authority to change the rule itself. But it interpreted Rule 100 to say that only a manufacturer can make tinted glasses of specified VLT and that VLT cannot be altered thereafter. VLT can be measured by luxometers, but police throughout the country do not have enough of these devices to enforce the rule, says the order. It also cited a 1998 SC order that disapproves the use of film.

"It is the VLT of the safety glass without any additional material being pasted upon the safety glasses which must conform with manufacture specifications," says the court in its order. It allowed exceptions on a case-by-case basis for those in the Z and Z+ category securities; these exemptions can be granted by the Home Secretary, in consultation with the police.

Not many are happy about the order

The Supreme Court's basis for the order is not uniformly shared by the public, and there have also been online petitions seeking a reversal of the order by the SC. There are those who have decided to not the remove film. "Women are attacked in public all the time; what difference will the rule make? I will wait and see what happens," says a woman car owner, on condition of anonymity. On BTP's Facebook page, many have posted comments saying that the rule will not bring down crime, but will only reduce privacy, reduce cooling inside cars, and will be dangerous for women drivers.

"The original MV rule was valid as many crimes do happen in cars. But with complete removal of film, more AC usage will be needed to cool the car. Also, women driving at night will be visible and may be harassed. Only very high-end cars come with tinted glass from manufacturer; others have no option," says Sooraj.

BTP has responded to this criticism, saying that privacy cannot be expected in public places, and that cooling inside the car will not be affected by the removal of films. The police also maintain that crimes against women will be fewer when they are in full public view.

The disposal of films removed from cars has also been a cause for worry. While lakhs of films are being stripped from vehicles, there is no clear mechanism for collecting and disposing of these in a safe manner. In some places, heaps of film dumped have been dumped by garages in storm drains and open lots, while others have tried to burn them, potentially emitting fumes of unknown toxicity.

Some public comments are also about the lack of luxometers, which the court cites as a reason for the ban. These devices are not very expensive, they say, and the police should have bought them. Saleem says that the device costs about Rs 1200 in market, but now the matter is out of the hands of the police, as they are required to implement the SC's order.

The public are also unhappy about what they see as selective enforcement of the order. In Bangalore, the state-owned bus company, BMTC, operates the largest fleet of Volvo buses in the country, and many of these have full-body advertising in the form of films pasted on the vehicles. The revenue from the advertisements is a useful addition to passenger fares, and without it the pressure to raise fares would be higher, say company officials. BMTC and other bus companies in the country have also entered into contracts with advertising clients, and the financial implications of the SC order on those contracts are being studied.

The police are clear, however, that eventually everyone will have to remove the films, and their enforcement of the law is continuing. A clearer view through vehicles on the road is slowly but surely emerging.

Navya P K is a staff journalist at Oorvani Media, publisher of India Together and Citizen Matters.