Mumbai's eye in the sky

The ruling son-of-the-soil party in the city council is putting the finishing touches to a plan to erect a huge Ferris wheel-like structure at Land's End. Whether any real Mumbaikars want this, or can afford it, is very doubtful, says Darryl D'Monte.
19 October 2008 -

It is amazing that Mumbai's elected representatives, like those elsewhere in the country, are smitten head over heels by symbols of so-called modernity. In the heady 1970s, Mumbai claimed to have the second revolving restaurant in the country; breasting the tape was, surprisingly, Surat, fuelled by wads of black money from smugglers and their ilk. The tallest skyscraper in the country is something else that Mumbai builders vie with each other to claim the credit for, with Burj Dubai and the Petronas Towers in Kuala Lumpur looming large in their fantasies.

Singapore and Hong Kong have never been far removed from many Mumbaikars' wishful thinking either. This is presumably because these are Asian cities - the first, a city state - which have made it into the big Western league. During the protracted struggle by Mumbai's cotton mill workers over the land that is being vacated as these units close, trade unions leaders would remind their followers that they wanted Shramapura (The City of Labour), not Singapore. 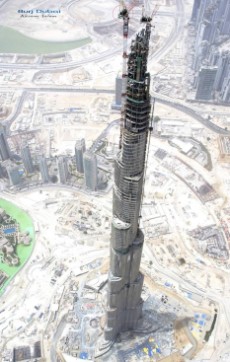 But the latest self-indulgence by the Shiv Sena councillors, who dominate the municipal corporation, really takes the cake. The ruling party in the council is putting the finishing touches to a plan to erect a 160-metre-high 'Mumbai Eye' - a huge revolving Ferris wheel-like structure similar to one that is the pride of London and, more recently, Singapore. This will, to the regret of Ravindra Waikar, the Sena standing committee chairman who spied the London Eye on his visit to that city earlier this year, be less than 200 metres tall, which is what Beijing is building - the world's highest Eye. Here, there is unfortunately a monsoon to contend with.

The location is at Land's End in Bandra, the northern coastal suburb, where some 14,000 sq metres of land have been identified. It is not clear, at this nascent stage, whether this is land which already exists, which seems unlikely, or which will be reclaimed, like much of the island city of Mumbai. Either way, the consequences will be disastrous. How tourists, in whose name many ill-conceived projects are planned, will have access to this slowly revolving marvel defies the imagination.

The site is where the first coastal highway, called the Bandra-Worli Sea Link, will also be situated. How this revolving structure will gel with the link is far from evident. Bandra, once the link is completed - after some 15 years' delay, due to obstruction by fisher folk, environmentalists and disputes with the World Bank and contractors - will see a stream of something like 170,000 cars heading south every day to Mumbai's central business district, and lemming-like, in the reverse direction in the evening. To think that visitors to the Eye will have to contend with a never-ending stream of traffic is sufficient to cause any motorist nightmares.

It is true that the site will afford a magnificent view of the Mahim Bay. This, incidentally, was guarded on both the northern extremity in Bandra and southern in Mahim by the Portuguese from the 16th century in order to protect their stronghold in this trading port. The two forts' remains still exist, but everything is now overshadowed by the cable-stayed bridge that has cost some Rs.1500 crores - four to five times the original estimate.

At that height, the visitor will get a ringside view of Dharavi, often dubbed Asia's largest slum, which is itself undergoing the painful throes of a huge make-over with the state government granting local and international builders three times the permissible height to rehouse the 300,000-strong slum dwellers in high-rise apartments and sell the rest of the real estate on the market. If, as it is entirely possible, the make-over of Dharavi never takes place, due to residents' opposition and other reasons (not least, the financial squeeze on builders throughout the world at present), visitors to the Mumbai Eye will be faced with the unedifying spectacle of having a bird's eye view of the squalor that epitomises Mumbai. It illustrates, to put it bluntly, the paradox that the country's arguably richest city also has the largest number of homeless people: nearly 9 million. 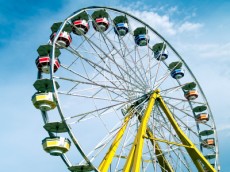 At that height, the visitor will get a ringside view of Dharavi, often dubbed Asia's largest slum.

There is another, less obvious flip side to the preoccupation with constructing such fanciful and wholly unrealistic urban symbols. Anywhere in the world, locals tend not to patronize them for the simple reason that they are too expensive for most residents. It is another matter that foreign tourists might not think twice about spending upwards of Rs.100 a seat for a half-hour spin. But, even on that score, Bandra is located at least an hour way from south Mumbai, where most fancy hotels are located, and it is unlikely that tourists will make a beeline for a ride in the sky when they have to battle Mumbai's formidable traffic en route.

To compound the confusion, the Congress-NCP coalition in the state, ever mindful of Lok Sabha elections next summer, is trying its damnedest to outbid the Sena and its splinter Maharashtra Navnirman Sena in demonstrating its nativist and chauvinist credentials. It is going ahead with its harebrained scheme to put up a Rs.200 crore statue of Shivaji in the Marine Drive bay -in full view of one of the city iconic landmarks. Marine Drive is often dubbed the "Queen's Necklace" for its glittering display of lights at night, an alluring curve in the all-enveloping darkness.

The precinct, incidentally, is world-famous for possessing the second biggest ensemble of Art Deco buildings after Miami. It has recently undergone the first phase of a state-sponsored make-over at the cost of Rs.30 crore. In the second phase, each of the buildings will have an informative board embedded in the promenade directly opposite, with details like its style, year of construction and architect.

Kumar Ketkar, the intrepid editor of Loksatta, the biggest-selling Marathi daily, almost lost his life when NCP goons attacked his home in Thane a few weeks ago. They were incensed at his column in his paper, where with dripping sarcasm he extolled the state government for ushering in Shivshahi, the mythical era of milk and honey during the reign of Shivaji - just by building the statue. To add insult to injury, the state government has decided to do away with the last stretch of what begins with the Bandra-Worli Sea Link, which is the bridge across the bay, linking Raj Bhavan to Nariman Point, only because it would hamper the unrestricted view of the Shivaji statue! For this construction too, a few acres will have to be reclaimed - a costly proposition, given the depth in the middle of the bay.

The Shiv Sena never loses an opportunity to proclaim that it represents the sons of the soil, but Waikar and other leaders don't think twice about taking their cue from our former colonial masters and other industrially advanced countries. On his educational trip to London - presumably at the height of summer, when a strange urge to educate themselves grips all politicians - he was also smitten by Madame Tussauds and wants to build a desi version in one the few remaining open spaces: 56,000 sq ft at Birla Krida Kendra at Marine Drive. For all the party's claims about representing 'Mee Mumbaikar', one wonders how many beleaguered, homeless and unemployed citizens of the city will be able to enjoy these diversionary fantasies.