The evolution of violence

Violence in India has followed this macro-to-micro trajectory of Indian modernity. As different forces have shaped modernity, we have shifted from large-scale acts of violence cutting across national boundaries, to state-level violence, to village level violence, writes Rajesh Kasturirangan.
02 March 2008 -

Riots play a curious but major role in the modern Indian imagination. While many educated people see them as examples of violence by lumpen elements in the service of primitive and pre-modern identities, the Indian riot is very much a modern phenomenon, containing within it all the three basic categories of the modern nation, namely, state, market and society.

To give one example of their essentially modern nature, riots are typically urban; even in the worst conflagrations such as the post Babri riots, rural India was mostly quiet. One could even argue that mass violence is a consequence of the state and market's impact on a traditional society. Whether in Godhra or Nandigram, there is a pattern: A dominant community, with the tacit backing of the state, terrorises a smaller (and less powerful) community. And there is usually an economic subtext as well; in Nandigram it was the SEZ and in Gujarat it was to end Muslim presence in certain sectors such as the hotel industry.

There is extensive literature on the sociology of riots. For example, we know that riots are less likely to occur in cities with strong civic bonds connecting communities. Similarly, we also know that riots rarely occur without implicit state connivance. A major line of explanation for riots is the clash of identities theory. According to this view, Indians carry several identities - religious, caste and class identities being some of them. Most of the time, we tolerate neighbours with different identities. However, every once in a while these identities clash, leading to riots and other acts of mass violence - especially when political leaders use identity politics for their own purposes.

There is no doubt that mass violence has paid dividends for politicians all over India: the roster of politicians who have made a living out of them cuts across party and ideological barriers: Jagdish Tytler, Narendra Modi, Bal Thackeray, and now Buddhadeb Bhattacharya. In other words, the clash of identity theory says: identity politics + state failure = riots, regardless of political ideologies of the protagonists.

The logic of modernisation

However, given the large variation in ideology and electoral compulsions between these politicians, it seems the use of identity is a surface signal, rather than the cause of violence. While identities are certainly part of the explanation, can they be the entire story? Is mass violence a failure of the nation-state or is it central to the nation-state's actions? We are quite ready to believe that invasions of other countries (Vietnam and Iraq, for example) are central to imperial modernity in the west, so it's worth pausing to ask if India too contains such demones. Perhaps riots and communal violence are part of the logic of modernisation in India.

What are the mechanisms through which modernity leads to violence in India? Modernity has changed the basic structures of our lives, such as the way we relate to one another and to the natural environment. These impacts have come as much because of changes in social organisation as because of technological progress. Modernity is a complex phenomenon, but for my purposes I'll define it as the reorganisation of society along rational lines, with efficiency and universality as guiding principles. Pre-modern Indian society was neither efficient nor universal. The nation-state and the market are the central mechanisms through which the rationalisation of society is implemented in India. 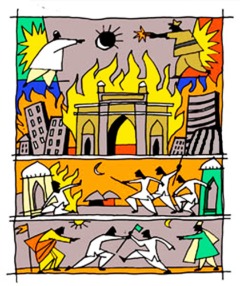 The nation-state and the market are related; one is the precursor to the other. The process of modernisation in India has been top-down, imposed from outside with an elite class of Indians acting as mediators. After independence, the nation-state implanted the seeds of modernisation. That period saw large-scale changes in economic and political structures such as the linguistic division of states, industrial development, and new scientific and technical institutions. The justification for all of these projects, then as well as now, is modernisation.

Violence in India has followed this 'macro to micro' trajectory of Indian modernity. The largest bout of violence we have seen so far has been the Partition, which accompanied the creation of the state; this was followed by the war with China, the two wars with Pakistan, followed by the Emergency, the 1984 riots, the post Babri-Masjid riots, the Godhra and Gujarat riots and more recently, the violence in Nandigram and elsewhere. The trend seems clear; we have shifted from large-scale acts of violence cutting across national boundaries, to state-level violence, to village level violence. The presiding deities of violence have also shifted, from national icons like Jinnah and Indira Gandhi to state level leaders like Bal Thackeray and Narendra Modi.

If the time of independence was a time for macro violence, our current version of modernity specialises in micro violence. Future acts of violence will be even more local - they will take place in neighbourhoods and be managed by local thugs. The macro-to-micro trend suggests that a deep river of modernisation is flowing underneath the identities fighting on its surface. Ethnic and communal clashes are means for channeling the energies released by modernisation. If so, large-scale riots might die out in the market age. While the nation-state channeled the energies of modernisation rather coarsely, the market does so with increasing sophistication. The model for market violence is advertising; just as advertisers have shifted from blanket appeals to everybody to targeting particular demographics, violence in the market era will be surgical and efficient.

It might seem like an improvement when we kill ten people at a time rather than a million. However, that line of reasoning is pernicious since it legitimises the inherent violence in Indian modernity. The decrease in violence is not because modernity has become any less bloodthirsty; it is because once the hegemony of modernity is established it doesn't need to be enforced on a large scale anymore.

Rights in the market age

As the market revolution gathers strength, and violence becomes more and more decentralised, resistance to the market revolution will also takes on a coordinated but decentralised form. Here, as in other aspects of the modernisation programme, India is about a decade or so behind China. China killed its citizens in larger numbers than we did during its nation-state phase and is now facing many internal challenges to its 'market communism'. To give one representative figure, the number of labour disputes in China (according to its own Ministry of Labour and Social Security) increased from 19,098 cases in 1994 to 314,000 in 2005. Even more interestingly, the number of 'collective actions' (that is, mass protests) jumped 73 per cent from 2003 to 2004. Not surprisingly, the Chinese market-communist state has responded harshly. The market age in India will probably track the Chinese model of decentralised protest and harsh repression.

The process of modernisation in India has been top-down, imposed from outside with an elite class of Indians acting as mediators.

•  Ideology of the cancer cell

Unlike the nation-state era, we don't have a bill of rights and responsibilities for a citizen of the market regime. Citizens of a nation-state can expect to be treated humanely even if they protest. Therefore protesters might be more willing to undertake non-violent forms of protest. The nation-state era is cognitively simple - everybody deals with one boss, the state. In the market era, both power and its critics are fragmented. We do not have good theory of political ethics to respond to the market driven fragmentation of power and violence.

Consider the two major sources of antistate violence in India, terrorism and naxalism. These are still being theorised in terms of class and religion. Yet, it is clear the structures of the networks organising terrorist strikes and naxalite raids are a new form of social organisation. For example, they are diffuse and decentralised without losing sight of a larger political aim. How do they preserve long-term goals without a centralised political hierarchy? The new ideologies of violence in the market era do not obey any rules such as the distinction between combatants and noncombatants - just as marketers do not distinguish between consumers and bystanders in their advertising campaigns.

If market violence mutates like a virus and leaps from one pocket to another, it has the ability to destabilise society. It took the independence struggle the better part of a century to win the protections enshrined in the Indian constitution. There is an urgent need to draft a similar charter of rights and responsibilities in the globalised market era. Otherwise, we run the risk of losing everything we gained in the struggle against colonialism.