Dramatic erosion of embankments, and continuous siltation threaten to wipe away a large island settlement on the Brahmaputra. Residents unhappy with the government's efforts to stem the erosion are now hoping the island's heritage and ecology will attract more attention. Ratna Bharali Talukdar reports.
21 December 2007 -

To be absolutely isolated from the rest of the world and feel the freshness of pristine natural beauty - that's what brings tourists from across the globe to this Majuli - one of the country's bio-diversity and cultural hot spots, and perhaps its largest populated river island, with a population of 2.15 lakhs in the lap of the Brahmaputra, the lifeline of Assam. The winters are even more gorgeous, with a yellowish tint of cosmic carpets made of flowers of mustard seeds that the entire landmass wears, the enviable sunsets and rich avifauna including those wide-ranging migratory ones roaming around the hazy skies.

Majuli is more than a tourist paradise; it is the epicentre of Vaishnavite culture and tradition in Assam and a unique cocktail of ethnic and non-ethnic flavours. Life goes on here like a picnic party with mouthwatering tribal and non-tribal delicacies, on bonhomie nights in sand isles with extravaganzas of songs, dances and drumbeats, and of course, those eye-catching dresses in vibrant colours hanging on the looms in tribal villages.

But now, this apparent idyll is under grave threat. Drastic shrinkage of landmass of the island due to erosion caused by river is posing a serious threat to very existence of the island, as well as the livelihood of the islanders. Originally formed as a result of the river and its tributaries changing course, the island has been facing severe floods and erosion since 1950, when a great earthquake raised the bed of the river. The high sediment load of the river due to massive silt formation has led to braiding of the channel. 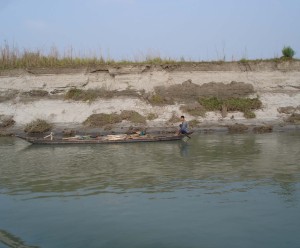 This rapid shrinkage of landmass has hit the people hard. They have had to face all the odds of continuous erosion and subsequent displacement - for many of them, several times. The worst sufferers, however, are the Mishings, popularly known as Noi-parias, or the river bank dwellers. Shifting from one place to another in search of a home has tremendous impact not only on livelihood of these tribal people but it has posed serious threat to the very survival of their culture and identity, as the entire life and lore of a Mishing community is deeply associated with the river.

Meghnad Payeng, a teacher of the community and former headmaster of Majuli Auniati Hem Chandra High School who used to teach me English when I was in Class IX in 1985, has been pushed to misery, a far cry from his lavish village life in Kaniajan where he used to grow garlic, onion, mustard-seed, pea, and rice, and owned countless livestock - pigs, cow, bullocks and buffaloes. Now he lives on the embankment after being completely ruined by erosion. "Due to constant erosion, our community people have been reduced from traditional agriculturists to cheap labourers. This has a tremendous negative impact on our culture and tradition, leave apart the livelihood issue," he says.

According to statistics tabled on the floor of the Assam legislative assembly session in November, about 150,000 people in 35 villages, belonging to both tribal and non-tribal communities, were affected by erosion in Majuli during 2007. Due to constant erosion, the number of landless families has increased rapidly, and now they are visible in and around the entire island searching for petty jobs. Even at the entry point in Kamalabari, disembarking from the ferry - the only connection between the island and the rest of the world, running twice a day - on both sides of the main road, one can see rows of small dwellings of uprooted people living on meagre daily wage.

The pace at which the river has been changing course and eroding out villages is unbelievable. During July this year I made a visit to people living on the entire stretch of two-kilometre-long Sumoimari embankment of several villages including Kaniajan, Sumoimari, Upor Sonowal, Nam Sonowal, and Hukonamukh. I found some of the Mishing community who had been living there for years reaping Ahu, a popular rice variety. When I undertook my next visit to the same location during October I was stunned to see that there was neither any mark of human habitation, nor any remains of the embankment. Those living on the embankment had to shift within a single night, some people moving around told me. The river now has reached the Kamalabari-Bangaon road inland; in the early 90s, the river-bank was six kilometres away from this point!

With rapid loss of livelihoods, the locals have been anxious that the government take steps to stem further erosion. While there has been some response from the government, locals are unhappy with the agencies implementing various government schemes. Locals living on the island view the officials and contractors of the Board, who make frequent visit to their areas for undertaking protection works as "strangers, engaged to do some foolish work on our behalf. They never cared to take our experiences into consideration," alleged angry Khagen Doley, an embankment dweller at Kamalabari point.

The Brahmaputra Board, entrusted with the responsibility for implementing a number of short-term and long term protection measures, agreed to implement a master plan for protection of the island by undertaking thorough surveys, investigations, and laying of a physical model, but has failed to do this for years together. In 1996, the Flood Control Department of the Assam government requested the Board to prepare a Master Plan, and also carry out hydraulic studies to suggest suitable anti-erosion measures. The Master Plan was prepared in March 2000, and based on it the Board initially made a project proposal for Rs.244 crores.

Though this was subsequently curtailed, the Central Water Commission sanctioned Rs.87 crores in August 2003, to be spent on a number of different focus areas - survey and data collection, physical modeling, construction of embankments and permeable screens with RCC porcupines, and strengthening existing land spurs, and bank protection - over three years.

However, H C Bhuyan, president of Majuli Suraksha Samiti (MSS), a leading organisation working for protection of the island, noted that although the master plan was to be implemented based on the findings of the physical model study, the Board has not yet completed the study. "This has amply proved that, the Board did not take care to carry out the works in the scientific manner as required for a land mass like Majuli, having peculiar characteristics, where the State Water Resources Department fought only losing battles, for more than half a century with the similar nature of protection measures." The MSS has also alleged that the Board could only utilise only Rs.21 crores of the allocated amount till March 2007.

"The contractors engaged by the Brahmaputra Board prior to beginning of their work of erecting RCC porcupines performed a religious ceremony and we were distributed offerings of the ritual. That was the only participation from our side during the entire process. Not one of them has asked us about our experiences. Do they know the river much better than us, whose entire life and lore is associated with it? Then, how could they think of controlling the course of the river by just erecting some RCC porcupines? It is all to prove that they too have been doing something to utilise the money allocated by the government," Doley said.

Heritage to the rescue?

With little faith in the government's efforts, the locals are now hoping that a different form of aid will come to their rescue. A proposal to include Majuli in the list of World Heritage sites is under consideration with UNESCO, and if this were to happen, considerable more attention would be paid to the island.

About 150,000 people in 35 villages, belonging to both tribal and non-tribal communities, were affected by erosion in Majuli during 2007.

The island is home to many Sattras (Vaishnavite monasteries), dating back to the strong tradition of Vaishnavite culture in medieval Assam. The saint Mahapurush Madhav Deva established the first Sattra in the Dhuahat area of the island in the sixteenth century. He was the chief disciple of the great Vaishnavite saint Mahapurush Sankardeva, who introduced the Vaishnavite tradition to Assam, leading to a vibrant cultural renaissance through songs, dances, instruments, dramas, literature and art. The Sattra set up by Madhav Deva was however eroded away by the Brahmaputra. There were once 64 such Sattras on the island; of these 42 have already been eroded away.

An earlier proposal to UNESCO was rejected by the organisation, which in 2005 sought more information on the "Sattras remaining in the island on the way they have influenced and continue to influence landscape patterns and the overall interaction between people and nature and Majuli". For its second submission, the Assam government has taken some stronger steps. The Assembly has already adopted the Majuli Cultural Landscape Region Act, 2006 and begun the formation of a Management Authority and and Executive Group under the Act. Also, following the exchange of letters between the Governor and the Prime Minister, the latter has asked the Ministries of Water Resources, Development of the North East Region, and Culture to look into the issues and "take necessary measures for the preservation of this important heritage site."

TIGER SANCTUARY : Are tigers back at the Buxa reserve?
MORE ARTICLES
on similar topics ...
ASSAM