The pattern of development in India seems ominously like England in the nineteenth century. Are Indian companies the vanguard of a 21st century Indian imperialism, ask Rajesh Kasturirangan.
30 November 2009 -

These days, it is not unusual to hear that some Indian company or the other is acquiring large properties abroad. Tata bought Corus, Mittal bought Arcelor and Reliance is making a bid for LyondellBassell. Less than twenty years after liberalisation began, the Indian capitalist class is as ambitious as any of its counterparts in the rest of the world.

It is also, perhaps, just as ruthless. I haven't been shocked by the acquisition of companies in the first world, which one could argue is part and parcel of the natural process of globalisation and the flattening of hierarchy and resources between the first world and the developing world. As a country with a large, widely spread and well educated diaspora, we are all well situated to take advantage of globalisation. However, there is another kind of Indian expansionism which is more ominous, for it is driven by the acquisition of land and natural resources and the exploitation of the weakest people in the world.

We know that the Chinese are investing aggressively in oil, minerals and other natural resources throughout Africa and South America. If the Chinese expansion is state-directed, there is a corresponding Indian intervention by private parties. Twice in the last month, I read that the government of Ethiopia was leasing arable land to Indian agribusiness companies. As one article says, "The government of India, where land is crowded and overfarmed, is offering incentives to companies to carve out mega farms across the continent."

The numbers quoted are immense. Indian companies have already invested 4.2 billion dollars in Ethiopia. The land being leased out is even more mind-boggling. The smallest figure that I have read about is 30,000 acres; another article mentions a seventy-five year lease of 700,000 acres of land to a single Indian concern. To give you a sense for the latter number, 700,000 acres is about 2832 square kilometres; according to Wikipedia, the city of Bangalore is about 709 square kilometres. Hong-Kong is 1104 square kilometres. So one Indian firm is going to own land two and a half the size of Hong-Kong and four times the size of Bangalore for seventy five years.

The British, at the height of their imperial might, got Hong-Kong from the Chinese for ninety-nine years. Our companies are treading the same path one hundred years later.

The Indian version of mercantile imperialism isn't just restricted to other countries; it is also happening within India. The tribal regions of India are being denuded of their forests and their people dispossessed of their lands by various industrial concerns. Vedanta Resources, based in London but run by a billionaire of Indian origin, is being accused of a land-grab in Orissa. I can't get the exact figures, but just one aluminium mining project alone runs to about 1500 acres, and even that isn't the entire story. A university named Vedanta University and run by the same mining group, has been awarded 6000 acres of land in Orissa along the Puri-Konark main drive.

Who needs that much land for a university? The Indian Institute of Science is 400 acres. Currently, the largest university in India (by area) is the University of Hyderabad, which has 2300 acres, much of which is not being used for academic purposes. Why would anyone want two and a half times that amount for a university in Orissa, unless that the university is a pretext for a larger acquisition of land?

The pattern of development in India seems ominously like England in the nineteenth century. The start of the industrial age saw a massive expansion in the use of technology, which lead to large scale changes in the British economy, both inside and outside. While this expansion in England and the rest of Europe saw the creation of a middle class and much of modern science and technology, it was sustained by children slaving away in mines for fourteen hours at a stretch and brutal colonization of entire continents. Is this what we want to become? Are Indian companies the vanguard of a 21st century Indian imperialism? More importantly, should we become neo-colonial masters? 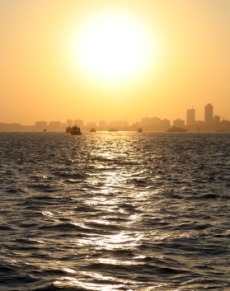 Indian companies too are looking beyond the seas; their expansionism too is driven by the acquisition of land and natural resources and the exploitation of the weakest people in the world.

•  Stories of development
•  Slumdogs versus millionaires

There is any ugly, chauvinistic side to Indian expansionism; I can't count the number of times that I have heard that we are now ready to play in the big league, that African countries are losers who deserve to be exploited. If it sounds racist, well, it is racist. We all know how much colour and caste matter in this country. As long as we were poor and at the receiving end of imperial power, the hierarchical nature of Indian thinking was an internal problem. Now that our companies are going all over the globe, we will inflict these ideas upon other nations. It is a well known fact that Indians are hated all over East Africa because of their employment practices.

Of course, it is possible that we will become a responsible industrial power; that the exposure to other cultures and peoples will make our companies more humane. If not, we might lose business to a Chinese company that treats its African employees better.

There are two arguments against my characterisation of Indian imperialism. The first one (somewhat strangely) says that the process of imperial expansion is inherent to capitalist forms of development, that Indian expansionism is no different from Victorian era British expansionism, but that is a good thing, for the benefits outweigh the costs. According to this trickle-down theory of development, a culture or nation advances outward from a narrow vanguard class (could be intellectuals, the commanding heights of the economy or a narrow bourgeoisie) and eventually spreads to everyone.

This is the group that believes that democracy in India is a legacy of British colonial rule, that the colonial period started the transformation of India from a backward, casteist and feudal society into a modern democracy. The British legacy in India is the rule of law, the protection of property rights and entrepreneurship that are necessary for a modern society. These arguments are familiar; an Americanised version of the same argument says that the spread of capitalism will turn China into a liberal democracy. Maybe so, but the Chinese communist party has other ideas; having learnt from the Soviet Union's mistakes, they are trying their best to become a very different kind of capitalist country, more like technocratic fascism rather than any form of liberal democracy.

Another argument for Indian expansionism starts from the scarcity of land and other resources in India. It says that we need to shift to agribusiness, large mines and big companies because our population is too big and its needs too varied to be met without large-scale exploitation of global natural resources. If the first argument is top-down, the second argument is bottom-up; it starts with two seemingly uncontroversial facts. The first is that India has seven or eight hundred million people who live in unacceptable poverty. The second is that China has lifted more people out of poverty faster than any other nation in history.

From these two facts, we are supposed to conclude that we should emulate the Chinese model and start thinking big about our expansion. The 'only way out of poverty' argument is perhaps even more pernicious than the first one, for it points to a kind of mental poverty (or should I say developmental poverty) where a hugely wasteful and damaging economic model is the only model of social change worth emulating. If the world have learnt anything in the last fifty years, it is that we do not need to build large dams and ruin forests to progress towards a wealthier future.

Behind the tacit state support for Indian capitalist expansion is the ever-expanding fear of China, that they will lay claim to as much of the earth as they can while we sit around twiddling our thumbs. Here too, we are not pioneers. The British impetus to colonise India was often spurred by fears of French rivalry. Between the attack on Tipu Sultan in 1799 and the first war of independence in 1857, the British turned slowly from being a mercantile power to an imperial coloniser partly because they wanted to prevent the French from getting there first. A combination of fear, military success and technological progress drove European expansionism in the America's, Asia and Africa.

The consequences of that combination were painful not only for the colonised, but also for the coloniser: interminable warfare throughout the nineteenth century culminating in two the world-wars. Is this what we want? The Bible (Matthew 16:26) says "what good will it be for a man if he gains the whole world, yet forfeits his soul?" We should heed that advice.