The citation for the 2005 Ramon Magsaysay award speaks of her "untiring leadership of the Cancer Institute as a centre for excellence and compassion for the study and treatment of cancer". Ambujam Anantharaman speaks with V Shanta, whose 50-year career is a glitterring record of progress against cancer in India.
21 August 2005 -

If cancer is no longer the spectre of certain death, it is due to the untiring efforts of people like V Shanta, 78, winner of the Ramon Magsaysay Award for Public Service, 2005. The award citation recognises her "untiring leadership of the Cancer Institute as a centre for excellence and compassion for the study and treatment of cancer in India".

In her medical career spanning 50 years, Shanta - Chairperson, Cancer Institute (Women's Indian Association), Adyar, Chennai - and her mentor S Krishnamurthi, pioneered a multi-disciplinary approach to cancer care and treatment, particularly cervical cancer. From a cottage hospital with 12 beds, the Institute has now achieved international stature in treatment, training and research. The Cancer Institute treats 100,000 patients a year - 60,000 of them free of cost.

Among the many firsts to her credit, Shanta also developed India's first programme for early detection of cancer in rural areas. She has trained hundreds of village nurses to screen rural women for cervical cancer. Travel allowances are given to the poor so that they can come for regular treatment. A volunteer organisation, Sanctuary, was started in the Cancer Institute to give emotional support and counselling to patients, their families and cancer-afflicted children.

A member of the World Health Organisation's advisory committee on cancer, Shanta has received 33 national and international awards, including the Padma Shri. She has also written on cancer extensively - in journals and books. An interview. 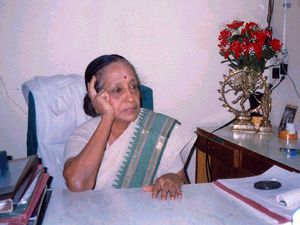 Q. What are the strides in cancer treatment since you entered the field?

A. There has been a sea change, actually. In the 1950s, there was no concept of medical oncology. Once the importance of oncology (the study of tumours) was recognised, a multi-disciplinary approach in cancer management emerged. New types of treatment like chemotherapy - treatment with drugs - entered. It came to India in 1970 or so and to the rest of the world a few years earlier. This gave excellent results.

Q. You have talked about difficulties in getting recognition for Medical Oncology as a discipline. Can you elaborate?

A. That's a long, long story. We perceived that we needed specialists with a comprehensive perspective for treatment of cancer. The situation then was, if you went to a surgeon, he would operate; if you went to a physician, he would prescribe drugs; if you went to a radiotherapist, he would give radiation. Comprehensive training covering all this was needed. From 1970-80, we spent all our time travelling to Delhi and back, trying to get the Medical Council of India to permit us to conduct training programmes. It was like hitting a stone wall again and again. Finally, we had to go to higher levels and in 1982, the Medical Council sanctioned a training programme at the Cancer Institute. The first batch of students who were specialists in Medical Oncology and Surgical Oncology (DMs and MChs) passed out in 1984. Oncology became a super-speciality. Other institutes followed suit a few years later.

Q. What was the attitude to cancer and how has your work changed this?

"From 1970-80, we spent all our time travelling to Delhi and back, trying to get the Medical Council of India to permit us to conduct training programmes. It was like hitting a stone wall again and again."  •  Award Citation
•  Magsaysay: Indian winners list

A. When this Institute was first started, the attitude was - "Why do you want to spend money on treating cancer? The patient is going to die anyway." This was the reply of a state minister when the Women's Indian Association (WIA) approached the government for help. Muthulakshmi Reddy, the first Indian woman doctor, thought differently. Her sister had died of a misdiagnosis and incorrect treatment of rectal cancer. Reddy knew that cancer was being treated successfully abroad. Muthulakshmi Reddy set up the WIA in 1954 as a body to create funds for setting up a cancer hospital. Her son Krishnamurthy (I was the Institute's first resident Medical Officer then) demonstrated the work we do and the fact that cancer can be cured. This helped change the attitude to cancer somewhat, but not enough. This can be achieved only through continuous education. For that we need the help of the print and electronic media. The latter should give cancer education some free airtime.

Q. What prompted you to specialise in this field?

A. God. Destiny. My first posting as a house surgeon was in the cancer ward of the Government General Hospital, Chennai, in 1950. Conditions were appalling, corruption rampant. Muthulakshmi Reddy, who had the vision of setting up a cancer institute, sent her son Krishamurthy to the hospital for training. He took charge and changed things. When the Institute was started, I joined it.

Q. You have personally focussed a lot of effort on cervical cancer...

A. Cervical cancer is a disease that affects the lower socio-economic strata of women. The incidence in developing countries like India is much higher than in developed countries. This is due to lack of genital hygiene. The more children a woman has, the greater her chances of infection. Cervical cancer can be completely cured through surgery and other methods. We have demonstrated this. Rates of cervical cancer are going down. What we want to do now is prevent cervical cancer through education. Cervical cancer has a long gestation period of six to eight years. If women come for regular screening, we can spot early cell changes using techniques like Pap Smear, Visual Aided Inspection and Colposcopy. If the pre-cancer stage is caught, then cure is possible without surgery. For this, we need organised screening programmes in hospitals.

Q. In your experience, is there an element of neglect in the Indian woman's attitude to her own health? Is that the reason for her increased vulnerability to illnesses like cervical or breast cancer?

A. Yes. There is a strong element of neglect where women's health is concerned. Women in India always feel that their primary duty is to their family. Whether it is money or time, the family takes priority, and women's own needs are pushed to the background. I would call it self-immolation of women for the sake of their families. Naturally, when they approach a doctor or a hospital for a health problem, it is usually too late. This accounts for the high incidence of cervical cancer in Indian women.

Q. Who should come for screening? How often should it be done?

A. In India, every married woman with more than two children must come for screening once a year. Abroad, we would put it as any woman with sexual experience. If for three successive years, the screening is negative, then the next test can be deferred. The importance of education and awareness cannot be over-stressed here.

Q. What about breast cancer?

A. Unfortunately, while we are seeing a downward trend in cervical cancer, we are witnessing a rise in breast cancer. This is because of lifestyle. Late marriages, reduced number of children, fast foods, high cholesterol, all these are linked to breast cancer. Here too, screening is crucial. Small tumours of up to 1 cm or less can be removed without going in for mastectomy. The aim is organ preservation. Chemotherapy reduces chances of metastasis (spread of diseased tissue or cells from one part of the body to the other.)

Q. How did you feel when you heard the news of the award?

A. Exhilarated. It is an international recognition. It is an award for the Institute, not for an individual. Everybody here has taken it like that! (Women's Feature Service)