Should bribe-givers be let off?

Researchers conduct experiments to study Kaushik Basu's idea that only bribe-takers should be punished, and get insight that may help anti-corruption efforts. Tarun Jain reports.
31 December 2012 -

On the anti-corruption website www.ipaidabribe.com, the stories by citizens are not about rigged sales for wireless spectrum or mining licenses, MPs who vote for cash, or bungled Commonwealth Games, but of marriage registrars and excise officers. "The inspector who visited our factory immediately asked for Rs.5000, else work will get slow down," complained one person from Mumbai. A gentleman from Erode who explained to the inspector that a bribe demand of Rs.750 was unjustified since the passport fee itself was Rs.1000 was threatened that he will never receive his passport.

One perceptive (and perhaps heartbroken) suitor wrote about marriage registration, "I was asked a minimum of Rs.500 in order to get an interview with the magistrate. But at the end I didn't get married, so should I ask for a refund??"

It is difficult to match the corrosive impact that daily demands for petty bribes have on the economy. Not only do these demands grate on our sense of justice, but they also have a potentially large economic impact in terms of lost enterprise and productivity. Such harassment bribes, where officials hold up paperwork in order to extort bribes from citizens, are ignored in the media in favour of bigger scams involving multiple crores of rupees.

The anti-bribery laws are of no help. The law views citizens who pay bribes as willing participants, and therefore equally liable and subject to prosecution. So citizens are reluctant to come forth, except on low-cost platforms such as ipaidabribe.com.

In 2011, the then Chief Economic Advisor to the Indian government, Kaushik Basu, suggested "a small but fairly radical idea" to combat harassment bribery. Observing that treating both the bribe taker and the bribe giver as liable for corruption creates a large disincentive for citizens to report the transaction, Basu proposed that the law should be amended so that only the bribe recipient is liable and prosecuted whereas the giver is offered impunity.

This way, Basu reasoned, upset and enraged citizens who are held up by corrupt officials have an incentive to report the bribe transaction after it has taken place. Officials, who realize that the citizens are more likely to report, will calculate that they are more likely to get caught and reduce their demand for bribes as a result. Taking the argument to its conclusion, Basu predicted that implementing the asymmetric liability policy will eliminate the demand for harassment bribes in the long term.

Of course, Basu was careful to point out that his proposal did not apply to collusive bribes, where a citizen (or businessman) conspires with officials for preferential treatment, say in awarding contracts. In collusive bribes, both the official and the citizen are better off after the transaction, instead the cost of corruption is borne by someone else in society. For example, if a bad driver gets a license by bribing an official at the transport office, then the rest of us must bear more dings, bumps and frayed nerves when this person takes to the roads.

Asymmetric liability rules are not entirely novel. In the US, whistleblowers in corporate fraud cases enjoy impunity from prosecution. And officials used the same principle during the Prohibition era (1920-33), when production, distribution and sale of alcohol was illegal, but the consumption of alcohol was not. After all, someone was required to testify for the prosecution and who better than the customers of the local speakeasy! 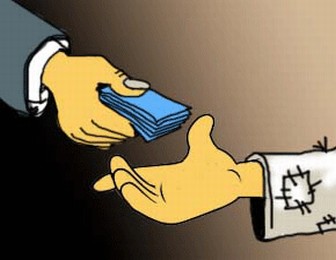 Treating both the bribe taker and the bribe giver as liable for corruption creates a large disincentive for citizens to report the transaction, says Basu.

Nonetheless, a proposal to legalise bribery from a top economic advisor, even written as a personal comment, brought forth a burst of commentary in the media. The Economist thought it was an idea worth pursuing, as did Le Monde newspaper in Paris. But in India, Basu faced a number of critics. At The Hindu, Rural Affairs editor P. Sainath called the idea "obscene", arguing that in a scarcity economy, victims will face larger demands to compensate for the greater risks now face.

Perhaps the most biting criticism came from Jean Dreze, the social activist at the heart of the Right to Information Act. Dreze had two main objections. First, if law enforcement was inefficient and corrupt, then reporting a bribe demand will not necessarily result in prosecution and would instead bring "litigation costs, possible harassment and little chance of getting justice." Second, many citizens see the law as a moral guide, and legalizing bribe-giving might reduce the stigma associated with corruption.

Given the arguments back and forth, there is scant empirical evidence to substantiate any position. Since the proposal has not been turned into law, much less implemented in a way that might be satisfactorily tested, researchers cannot conduct surveys of corruption levels with and without the law in place.

To add data-driven evidence to the debate, Klaus Abbink and Lata Gangadharan from Monash University, Utteeyo Dasgupta from Franklin and Marshall College and I conducted an experiment. This experiment mimicked a corrupt transaction, with student participants from three major universities in Hyderabad in the roles of citizens and officials. Lest anyone think that the students are not representative of citizens at large, 55 per cent reported experience in paying bribes, and 63 per cent were familiar with the anti-corruption laws in India. To motivate participants to take their roles seriously, they received cash earnings based on their decisions in the experiment.

In the experiment, an official has the option of either providing a service without a bribe demand (and receiving only his salary), or asking for a bribe and potentially adding to his salary. If he decides to ask for a bribe, then the citizen chooses from three options. First, she may take a principled stand and refuse to pay. Consider taking an injured relative to a hospital and being faced with a bribe demand for admission. In this case, refusing to pay might lead to considerable delays in treatment and worse health outcomes. So such a stand would be very costly to her even though the moral point is made.

The second option is to pay quietly, whereas the third option is to pay but then report the transaction. In both cases, prosecution is probabilistic in line with Dreze's critique, but the chance of success is 40 per cent if the citizen reports the transaction and 5 per cent if not. We conducted two versions of the experiment - first with symmetric liability where both the official and citizen are prosecuted (the status quo) and second where only the official is prosecuted (Basu's proposed change). You can fill the full research paper at this link.

We found strong evidence that Basu's proposal works. 25 per cent of citizens reported bribe demands in the symmetric case, which increased to 59 per cent in the asymmetric case. Looking at officials, while 38 per cent asked for bribes in the symmetric treatment, this fell to 24 per cent with asymmetric liability as officials feared the impact of greater reporting by citizens. Interestingly, the moral "refusal to pay" did not change significantly as we switched between the two versions (17 versus 19 per cent), suggesting that the law is not a strong guide to moral behavior.

But what about Dreze's objections that officials might harass citizens who report bribe demands? If a citizen reports a telephone linesman for demanding a bribe, and the linesman is not punished, the citizen might find herself with no phone service for a long time. To test the impact of this objection, we conducted another treatment where officials who escape punishment can retaliate against citizens. In our formulation, retaliation is never an optimal strategy, but hangs as a threat that can be used by a vengeful official.

We find that the impact of asymmetric punishment is mitigated considerably when retaliation enters the formulation. Only 42 per cent of citizens report bribe demands and 37 per cent of officials demand bribes.

These results contain something for everyone. Basu's proposal has bite in curbing harassment corruption, but implementation requires a careful legal package that protects whistleblowers from potential retaliation. Such measures could include anonymity for whistleblowers, crowd-sourced information gathering, and frequent transfers even among the lower bureaucracy to break up the networks that facilitate retaliation.

Kaushik Basu himself wrote that he received a number of letters from ordinary citizens across the country, thanking him "for not treating me as a criminal when a government officer came to harass me." Since then Basu has moved on to a new job as the Chief Economist of the World Bank where he can consider his proposal for a large number of developing countries, in addition to India. Meanwhile, I hope the debate on corruption will be informed by the results of experiments such as ours.

Tarun Jain is Assistant Professor of Economics and Public Policy at the Indian School of Business. His web page at the school is here.