What turns police personnel into instruments of violence against the underprivileged classes to which they often themselves belong? Arvind Verma has some answers.
01 June 2004 -

I have been asked several times why police officers carry out illegal orders and act against members of their own socio-economic class. It is well known that a large proportion of police officers, especially subordinate ranks of constables, sub-inspectors and even inspectors come from the lower economic and social classes. Most of them are witness to, and prior to enlistment perhaps even victims of socio-economic exploitation. Yet, after joining the service they appear to forget these discriminations and plunder people of their own background. Moreover, by harassing, extorting and exploiting the weaker sections, they often serve the interests of the upper classes to which they themselves never belong.

There are two kinds of violations that police personnel engage in. The first is corruption against individual citizens as well as institutions; this corruption usually targets the income or livelihood of the victim. Most middle and upper class people have experienced this first-hand. Those driving two-wheelers, cars, trucks and buses face extortion by traffic police in every part of the country. Smaller operators, such as hawkers, street vendors, telewallahs, small time shopkeepers, and even those from well established businesses are familiar with the demands from their local police stations. Either they are forced to pay haftas [weekly payments] or at frequent intervals suffer extortion simply to operate their business. Anyone unfortunate enough to be a victim of crime also knows that his case will not be registered without paying some money to the police station-in-charge.

A second category of criminal conduct by the police involves the use of physical force against suspects of crimes, perceived anti-social elements, and those agitating against the establishment. This typically follows a pattern - upper castes and economically well off people are usually not subject to these atrocities. On the other hand, the Dalits, lower castes and poor people have long ago accepted that the police will act against them as henchmen of the upper and land-holding castes. These groups are regularly subject to harsh physical treatment, and even when innocent run the risk of having false cases registered against them. All police custodial deaths are largely those of poor or lower class people. 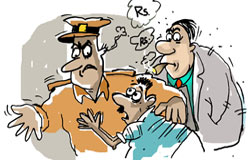 A common explanation for police misconduct is that beat personnel are following orders from their superiors, but this is a very weak one. Their superior officers are taught explicitly that there is no defense for carrying out an illegal and immoral order, and are responsible for the conduct of their subordinates. Generally, therefore, all instructions to subordinates to behave in impermissible ways are verbal; no superior issues a written illegal order. The subordinates carry them out either because they believe in its correctness, or due to pressure and fear of victimisation by superiors. The officers themselves may feel pressurised by others above them, but still have the option of refusing to carry out the order.

Why would an officer instruct a subordinate policeman to flout the law? One reason is that many officers believe legal methods do not work in solving crimes, and adopt illegal means as a valid substitute. Such misconduct is not limited to 'bad apples'. Whenever cases of torture, abuse of force, or corruption are exposed the government and senior officers describe it as an individual act of aberration. Never has any police leader admitted that such actions are endemic and an example of organizational deviance and practices. Brutality, corruption, and illegality within the Indian police are well recognized and pervasive. This behavior exists within every rank, from the constable to the chief of police and in every police department of the country.

Such pervasive deviance flourishes because of organizational culture that has evolved in the system through several kinds of practices, beliefs and value systems. The sub-culture of the Indian police was assiduously built by the British for the purpose of establishing their Raj. The police were meant to suppress any dissent against British rule, a situation that gave unlimited power to the police officers. Consequently, brutal action, misuse of force, and corruption became endemic and rampant in the police department. Unfortunately, after independence the system has not been reformed and police culture and organizational practices remain unchanged. In post-independence India, the police are still not accountable to the citizens.

Further, the Indian police system is designed for maintaining order and enforcing the law rather than serving the people. However, 'order maintenance' translates into the perpetuation of existing social and political order. The policing objectives are to maintain this status quo. Accordingly, any attempt by the lower classes to change their situation threatens the existing 'order'. Even when the landless and the poor demand better wages or working conditions for themselves their actions 'disturb the order'. The upper classes and land owners fear losing control over the cheap labour provided by the lower class if their economic and social condition improves. They resist fiercely, and often label agitating groups 'naxalites'. In this climate, police officers target those seeking to transform the prevailing conditions.

The Indian police system is designed for maintaining order and enforcing the law rather than serving the people. However, 'order maintenance' translates into the perpetuation of existing social and political order.

It needs to be pointed out that many courageous officers refuse to act against industrial or rural labour in their struggles with the ruling classes. But this happens very rarely. In most cases the police quickly arrest the workers and break up protests using whatever force is necessary.

The culture and beliefs that makes the police oppressive also comes from training, working conditions, management and leadership practices. The hostility that police personnel encounter from the citizens further sponsors a feeling of us versus them. This attitude develops into a culture of silence where police officers are reluctant to turn against their own colleagues. Thus, even when an officer gets to know about corruption, misuse of force, partisan and illegal behaviour by his associates, it remains unreported. This is true of almost every police force in the world. In a comparative study of Japanese, Canadian and Indian police personnel it was found in all the three countries that a majority of police officers do not have friends outside their department, and that all believe they must stand by their fellow colleagues in all circumstances.

Here the role of the training institutes and organizational culture are significant in shaping the perceptions of the young people who come to join the department. It is well known that a large number of people who join the police do so with positive attitudes. The recruitment is generally between the ages of 21-35 when the youth are idealists willing to stand up for their beliefs. As Superintendent of Police I recruited a large number of young people as constables and found that the vast majority were seeking to serve the society. However, within a short span they would assimilate into the existing culture and behave differently. A research project I conducted at the National Police Academy confirmed this. New recruits' attitudes towards suspects of crime, anti-social elements and rule of law, all under went drastic changes soon after induction. They were willing to use force against suspects and did not see anything wrong in 'eliminating' terrorists.

The working culture, beliefs and attitudes prevailing in the organization dilute individual beliefs in most of the cases. I remember a fellow IPS officer who studied at the prestigious Jawaharlal Nehru University and was known there for his strong leftist views. He was all for bringing the revolution through the barrel of the gun and crushing the feudal landlords. However, after joining the police he became a notorious encounter specialist treating 'naxalites' and their supporters with special vengeance. Again, it must be pointed out that there are always exceptions and there are IPS and subordinate officers who maintain a high level of professionalism and humanism. Sadly, they are indeed exceptions.

Alongside such disregard for the rules, their concerns for service to the people were also diluted considerably within a short period. Officers openly declare their intentions of pursuing power, the perks of office, and status in society. When this is the situation for the IPS officers who are educated and amongst the best police recruits in the country, then the situation for subordinate police officers can just be imagined.

The system of administrative oversight is also responsible for police misbehavior. Police officers get away with misuse of power, partisan behavior and corrupt practices because Indian police lacks a proper system of accountability. In a perverse historical decision, the police were made accountable to local District Magistrates who representated the British rulers at the district level. This was dubbed as 'civilian control' over the police. The only publicly accountable person in this system is the Home Minister in Delhi, who is simply too remote a figure for any meaningful control. It is therefore unfortunate that independent and democratic India continues the colonial model whereas the objectives that the police must safeguard now in an independent India are based on democratic ideals and freedom. The existing police system does not subscribe to these ideals and was not meant to do so either.

Elitism is deep rooted in the culture, and the police are deliberately made to function in ways that support the interest of the elite classes, in the name of order.

As the criminal justice system and in particular the police have remained unchanged for the last 140 years, the behavior of the personnel has also not changed. Police personnel see themselves as the rulers and guardians of the state, emphasizing order maintenance rather than service to the people. It is for this reason too that even though many laws have been enacted to promote social equality and remove long existing social oppression the police do not enforce them. Indeed a large number of police officers are even ignorant about laws against Untouchability, Bonded Labour, Minimum Wages, Money Lending and Exploitation of women and children. There is plenty of social legislation enacted to protect the weaker classes from exploitation. Yet, the police remain indifferent to these. The indifference and ignorance towards government policies that tend to empower the weaker sections leave the police handling only the crimes against property and person where the propertied and upper classes have a greater interest.

Only when the police deliberately go out of its way to support the weaker sections and work in their interest can the system function and bring development in the country. Unfortunately, elitism is deep rooted in the culture, and the police are deliberately made to function in ways that support the interest of the elite classes, in the name of order. In such a situation subordinate officers become pivots in the administration and begin to prey upon the very groups they are drawn from. Unless the guiding emphasis on law and order is replaced with a focus on service to the ideals of democracy, the system is likely to remain unresponsive to the needs of the majority of Indians.

Dr. Arvind Verma is a former IPS officer. He is currently with the Department of Criminal Justice at Indiana University in Bloomington, in the United States, and the managing editor of Police Practice and Research.