The environment clerance process continues to make a mockery of the law. As the Athena case shows, when a project is pulled up, the Ministry simply finds another channel by which to continue it. Kanchi Kohli reports.
18 May 2010 -

"The committee found the Public Hearing in order and based on the discussions held and the clarifications provided by the project proponent the Committee decided to grant the environmental clearance to the power project in the instant case and recommended that the Ministry may inform the project proponent accordingly".

So reads the confident set of minutes of the meeting of the Expert Appraisal Committee (EAC) on Thermal Power projects, held in New Delhi on 30 April 2010. The committee members observed for the second time that 2x660 MW Coal Based TPP of M/s Athena Chhatisgarh Power Ltd should be granted an environmental clearance.

In the above sentence the words "second time" is of critical relevance. This is because not so far back on 8 March 2010, the environment clearance for the above project located in Janjgir-Champa, district of Chhattisgarh was quashed by the National Environment Appellate Authority (NEAA). The NEAA located in New Delhi is the legally mandated redressal body where environment clearances of industrial and infrastructure projects listed in the appendix of the Environment Impact Assessment (EIA) Notification, 2006 can be challenged.

8 March 2010 was an important date, and one that had a few unexpected smiles. It was only the second time in the history of the NEAA's existence that an environment clearance had been quashed. The first one being that of the Indira Sagar (Polavaram) irrigation project in Andhra Pradesh, back in 2007. But Athena's thermal power plant has had a not so unique trajectory. And here is where I spell it out ... the story of the approval, reversal, rejection and subsequent rubber stamping.

On 15 January 2009, the mandatory public hearing for Athena's thermal power plant was held under the chairmanship of the Additional District Magistrate (ADM), Janjgir-Champa, A K Tiwari. As the argumentations and discussions were on, the Regional Officer, Chhattisgarh Environment Conservation Board (CECB) Ajay Gedam was mandated to observe and record the proceedings. But, there were some fundamental procedural issues here. The public hearing was being held in violation of several of the clauses of the mechanism prescribed in the EIA notification. Other than the impacts of the project itself, this became a core point of debate at the public hearing.

Ramesh Agrawal, a social and environmental activist of Jan Chetana highlighted to the panel something that they should have been aware of already. Agrawal affirmatively pointed out that the EIA notification requires that a public hearing is arranged in a "systematic, time bound and transparent manner ensuring widest possible public participation at the project..." However, in the present instance most of the people who are likely to be directly affected by the construction of the project were unaware that a public hearing was being held and the administration had made no effort to bring it to their notice. 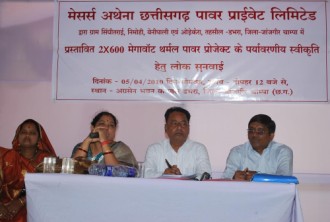 The EIA notification requires that a public hearing is arranged in a "systematic, time bound and transparent manner ensuring widest possible public participation at the project. However, in the present instance most of the people who are likely to be directly affected by the construction of the project were unaware that a public hearing was being held and the administration had made no effort to bring it to their notice.

The notification also requires that the concerned officials including the District Magistrate, officials of the Ministry of Environment and Forests widely publicise the existence of an Environment Impact Assessment (EIA) report. Otherwise, a public consultation process remains meaningless. Being the custodians of law, there is absolutely no excuse for such oversight.

But the next point was even more critical. As per law, a public hearing can only be held only after the EIA report is prepared as per a Terms of Reference (ToR) specified by the MoEF. In the present step this remained a procedural lacunae and the CECB did had not verify it before the public hearing. Members of Jan Chetana, brought to the notice of the panel that the TOR for the Athena Thermal Power plant required a study covering an area of 10 kilometres radius around the plant site, but was instead limited to 7 kilometres. As a result the most affected village Singhitari was not part of the assessment.

Based on all these contentions the ADM made a public announcement that the public hearing was cancelled. Thus, the application for environment clearance would required a second hearing to be decided. And there is where the predictability comes in. The EAC on Thermal Power didn't bother to reconvene the hearing. Instead, it took on board the project and recommended the clearance, which was subsequently stamped by the MoEF on 17 August 2009. The decks were now clear for the construction of this thermal power project of Rs.5700 crores.

Ramesh Agrawal, with help of pro-bono lawyers as part of Legal Initiative for Forests and Environment (LIFE) challenged this clearance before the NEAA. By this time this already dilapidated authority, never having functioned in full capacity; had only one member sitting in judgment - J C Kala, a retired Indian Forest Service Official. With little hope to gain from the erstwhile attitude of the NEAA the video recording of the public hearing was played at the NEAA hearing which brought to light the ADM's statement. The authenticity of this compact disc was verified from the CECB officials.

The NEAA issued a one-page order on 17 November 2009 stating that the proceedings of the public hearing did not have any validity. The order asked the Expert Appraisal Committee (EAC) on Thermal Power projects which granted the clearance to reconsider its decision. Subsequently, on 15 February, 2010 the Authority directed the MoEF to submit their response on the issue by 26 February, 2010 failing which the matter would be decided on grounds of whether or not the environment clearance can be upheld.

Following the NEAA order, the 60th meeting of the EAC was held January 11-12, 2010. It is only now that the members of this committee saw the video recording of the public hearing where the ADM had rendered the public hearing cancelled. Written clarifications from the ADM and other officials were sought and deliberated upon. Once done, the EAC members made an unstated admission of their blunder, and asked for the public hearing to be completed, post facto. Meanwhile the environmental clearance should have been kept only in abeyance.

The hearings before the NEAA continued. Advocate for the applicant, Ritwick Dutta argued that the as per the law, the comments of the public hearing must be incorporated into the draft EIA report. This would lead to the modification of the EIA report, based on which the first clearance has been granted. The modified report will then need to go back to the EAC for fresh appraisal. Agreeing with him, the NEAA quashed the clearance on 8th March 2010.

But what goes around the EIA notification circle often lands up in the clearance corner. The concluding statement of the Executive Summary of the Environment Impact Assessment (EIA) report had perhaps already laid out its "importance" when it stated that "the project will help meet the growth of demand for electricity in Chhattisgarh state. It will strengthen the regional power supply system and stimulate industrial development, and improve living standards of the people." Perhaps this is why the EAC does not penalise or punish any official and the project proponent in violation of the law.

The minutes of the EAC meeting held on 30 April 2010 - 1 May 2010 bring to light that the members were content with the fact that the "project proponent subsequently got the public hearing re-conducted again on 05 April 2010". Ramesh Agrawal, who attended the public hearing says, "For the MoEF, public hearings are simply a non-cognizable formality. Not a single project has been rejected on grounds of severe irregularities with public hearings. This time the venue of the public hearing was 25-30 km away from the project site and only 10-15 villagers could reach there. But the EAC chose to ignore this vital fact that managed to restrict the maximum possible participation of project affected people.

Almost equally critical were the steps taken towards the subversion of the free discussion at the public hearing. The Bhartiya Janata Party MP Smt Kamla Patel and Zila (District) Panchayat President Smt Suraj Vyas Kashyap were invited to be on the dais by the convening authorities. They spoke for more than an hour and in favour of project.

But, the committee members claim to have discussed the entire range of issues raised during the second public hearing and through written responses. These included, "location of public hearing site; impact on environment due to number of proposed power plants in the region; availability of water from Mahanadi River; compensation of land; inaccessibility of EIA report in CECB website; employment of locals; storage of fly ash; medical facilities; community development activities proposed; insurance for crop/agriculture produce affected due to power plant emission; protection of tribal cultural heritage; rehabilitation by providing pucca houses instead of kutcha houses; not to use ground water for the project etc."

There is no disclosure of conclusions in the minutes of the meetings. Nonetheless, the committee found that the public hearing was in order for the second time, and the project was granted clearance. Three additional conditions on all the money to be spent for Corporate Social Responsibility (CSR), after the destruction of the area were to be added.

What next? The circle of clearance can only lead Athena to the corridors of the NEAA yet again. There might not be much punch this time around. With the passage of the National Green Tribunal Bill on 30 April 2010, the NEAA is on its last leg before it shuts shop. But then as they say, the show must go on!