A jaundiced view of the Taj

The pernicious threat of pollution looms large over India’s most celebrated heritage structure and one of its most prominent emblems, the Taj Mahal, for decades now. Darryl D’Monte shares the findings of a recent study indicating that the ravages of pollution continue unabated.
19 January 2015 -

The Taj Mahal is in the news again and – as can be expected – for all the wrong reasons. American and Indian researchers released a study last month which establishes and identifies the pollutants that are being deposited on the marble façade of “the miracle in marble”, turning it from luminous white to brownish-yellow. It is as if the Taj, over the last four decades, is suffering from a prolonged -- and possibly fatal – attack of jaundice. This finding has hit the headlines the world over.

In experiments lasting over a year, the team, led by Dr Mike Bergin of the Georgia Institute of Technology in Atlanta, collected airborne particulate matter (PM) in air filters at the site. These were “found to contain relatively high concentrations of light-absorbing particles that could potentially discolour the Taj Mahal marble surfaces, that include black carbon (BC), light absorbing organic carbon (brown carbon, BrC), and dust”.

Their analysis of particles deposited on marble “surrogate” samples suspended from the top of the Taj indicate that a large proportion of the surface is covered with particles that contain both carbon components and dust. The team developed a novel approach that estimated the impact of these particles on the reflectance of visible light. This in turn was used to estimate the perceived colour by the human eye.

The team, comprising the Georgia Institute of Technology and the University of Wisconsin with IIT-Kanpur and the Archaeological Survey of India (ASI), found that deposited light-absorbing dust and carbon particles – both black and brown carbon – from the combustion of fossil fuels and biomass (like firewood and farm waste) are responsible for the discoloration of the surface of the monument.

Workers clean a portion of the Taj Mahal complex. Marble on the right shows a brownish discoloration caused by particles of carbon, and dust. Pic: Mike Bergin

Dr Bergin told India Together that the next step would be to formulate a sophisticated air quality model of the region to identify the sources of the pollutants. This would include Agra itself as well as the surrounding region.

“The model allows us to put in best guesses of emissions from vehicles, biomass burning from agriculture and cooking, as well as trash/refuse burning and brick kilns, and industrial emissions,” he said. “But we will also need to conduct a more focused measurement study in the region to better determine the sources and source emissions areas, as well as the contribution of regions outside of Agra to the poor air quality in the city.”

Pollution and the Taj

Environmentalists have raised fears about the “monument to love” being pockmarked by pollution since the 1970s. It came to a head when the Indian Oil Corporation decided to build an oil refinery at Mathura, only 40 km as the crow flies from Agra. When oil is refined, it emits sulphur dioxide which can combine with moisture in the air to turn into sulphuric acid, corroding the marble façade (the building itself is made of stone).

This triggered a huge controversy since the Taj was one of the Seven Wonders of the World and, since 1983, has been a UNESCO World Heritage Site. The government appointed a committee headed by Dr S. Varadarajan, then the Chairman of Indian Petrochemicals Ltd in Baroda, which was linked to the oil refinery there. It was, at the time, the most comprehensive study of the impact of air pollution on an ancient monument in the world.

This writer cited the case as one of three instances in his 1985 book Temples or Tombs? Industry versus Environment: Three Controversies (Centre for Science & Environment). The government consulted Tecneco, an Italian public sector oil company which had scrutinised the monuments in Venice threatened by oil refineries in its vicinity. In turn, Tecneco involved experts from a world-renowned institute for restoration of monuments in Rome, who carefully examined the Taj.

The experts found that in general, it was in good shape except for getting pitted by the loos or hot desert winds from the Rajasthan desert in summer, which defaced the intricate inlay work. In addition, the committee warned that the iron foundries in Agra, a traditional small scale industry, should change their technology to curb harmful emissions. During the emergency in the mid-1970s, an imperious Sanjay Gandhi summarily relocated the foundries to the outskirts of Agra.

In 1984, the intrepid environmental lawyer M.C. Mehta filed a public interest litigation against the authorities for neglecting to protect the monument from airborne pollutants. Disregarding the threat to the country’s most-visited archaeological and tourist site, the Supreme Court delivered its judgement only in 1996. However, it was considered “historic” because it banned the use of coke and coal in small industries in Agra and ordered the switch-over to clean compressed natural gas (CNG).

In 1987, an American scientist from the National Oceanic and Atmospheric Administration in Tennessee and an Indian from IIT-Delhi unearthed a new angle – they held the early morning dew which was deposited inside the cupolas of the Taj responsible for the discolouration. Because of the alignment of the cupolas, there were times of the year when the sun did not penetrate for the dew to evaporate and small amounts of sulphur dioxide ate into the façade. They attributed this chemical reaction to the sulphur in cheap coal used in small lime kilns.

In 1996, following the Supreme Court’s strictures, the government initiated a two-year Rs 220-crore project to clean up the air in the vicinity of the Taj.  In 2010, a decade later, however, the Nagpur-based National Environmental Engineering Research Institute (NEERI) found that levels of pollutants such as nitrogen dioxide (NOx), which can dull the sparkle of the monument, had crossed 1996 levels, after showing a falling trend till 2002. In 2006, NOx levels were 30 micrograms per cubic metre of air as against 22 micrograms per cubic metre of air in 1996.

“There is an increasing air pollution tendency beyond 2002 which may be attributed to rise in human and vehicular population,” said NEERI in a report to the environment ministry. 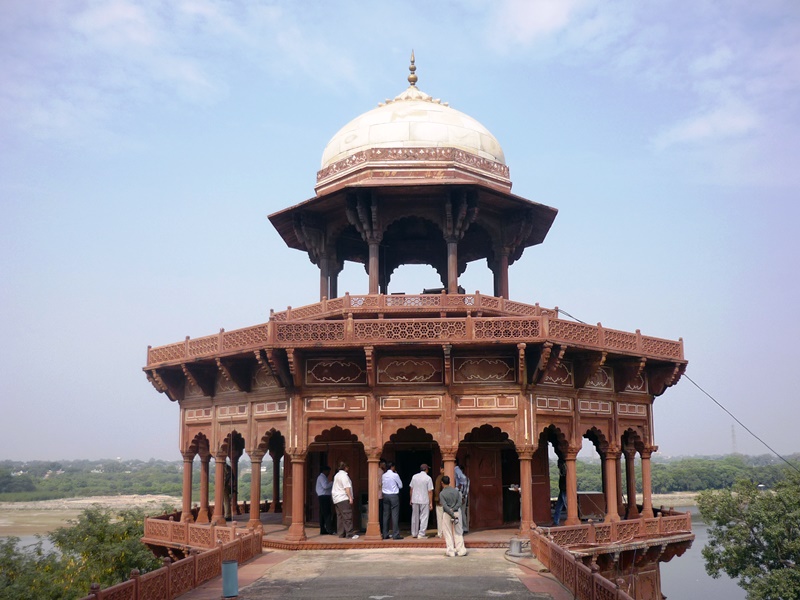 Air sampling equipment located in this section of the Taj Mahal complex was used to determine what was causing discoloration of the landmark structure. Pic: Mike Bergin

In 2002-03, UP Chief Minister Mayawati launched the Taj Corridor project, which was ostensibly meant to upgrade the tourist facilities at the monument. Heritage experts were alarmed by the construction of a mall – among other crass structures – on the banks of the Yamuna, which runs alongside, as the project could have led to flooding, endangering the foundations of the structure. It was ridiculed as being the “Taj Mall”. As it is, there have been serious concerns regarding the tilt of some of the minarets due to water logging, with the Yamuna, a highly polluted river, changing its course.

Mayawati was charged with siphoning off funds from this ill-conceived Rs 1.75-billion project and she and her aide were found possessing assets beyond their known means of income. However, the case has run its desultory course – rather like the Yamuna itself – and has run aground in the dreary corridors of the courts. However, moves are under way to remove the partial construction on the river’s banks and replace it with a “low-technology” green belt.

In 2010, ASI officials decided to apply a time-honoured method – mud packs or Multani mitti – to the surface for the fourth time in several years.  "Due to increasing pollution in the city, the white marble is yellowing and is losing its sheen," B. M. Bhatnagar from the ASI said.

The treatment is based on a traditional method used by Indian women to clean their faces. A 2mm-thick layer of lime-rich clay was plastered over the affected areas of the monument and left overnight to dry. "When it dries, the flakes are removed from the surface with soft nylon brushes and washed with distilled water to remove impurities sticking to the surface," he said.

There is a limited number of measures that the authorities can take to arrest the speed of the discolouration, since sources of pollutants in the air are both local, even caused by such essential activities for the poor as burning firewood and low-grade coal to cook, and regional. Indeed, as Dr Bergin says, “I think the same components of air pollution that make the air brown are making the Taj Mahal brown.”

The Indo-US team says, “Both organic carbon and dust have the potential to preferentially absorb solar light in the blue region of the spectrum, which can give the atmosphere a brown hue and has thus been dubbed the Atmospheric Brown Cloud.”

When it was first discovered around 2001, it was dubbed the Asian Brown Cloud. After vociferous protests, mainly by India, it was sanitised to “Atmospheric”. However, one of the two global experts on this phenomenon is Dr Veerbhadra Ramanathan of the Scripps Institution of Oceanography in San Diego. Today, no one questions the presence of this looming threat.

The surest sign that the Taj is endangered is the decline in the number of foreign visitors. From 7.9 lakh tourists in 2012, the number fell to 6.9 lakh last year. If it succumbs to pollutants, its demise may not be all those many decades away.