The shape of common sense

In Samiyarpettai, sub-collector Rajendra Ratnoo had put together a disaster management plan as a test case just two months ago. When the tsunami came last December 26, Ratnoo's plan worked spectacularly. Over one hundred survived because of Ratnoo's plan. That was an achievement, says Dilip D'Souza.
15 January 2005 -

Tamilnadu's Minister for Dairy and Milk Development, the flamboyantly moustached S Ramachandran, sits at a table in a crowded classroom. Above and to his right on the wall, I read this: "The Destiny of India Is Now Being Shaped in Her Class Rooms." It was clearly painted up there a long time before Thiru Ramachandran arrived today in Parangipettai, but it might as well have been painted for his visit.

Because Ramachandran is here to take stock of how relief efforts, in response to the tsunami of December 26, are shaping in this corner of his state. He is meeting today with a delegation of "community leaders" from the surrounding villages, and he has with him officials from his government. There in that crowded classroom, through the decibels from many voices, some kind of destiny is indeed being shaped. Time will tell what shape, but it is happening.

It's just five days after the tsunami roared through the coastal areas in this district (Cuddalore) -- fishing villages near Parangipettai like Indira Nagar, Pudupettai, Pudukuppam and more. We have seen destruction on a scale that has us groping for adjectives, struggling to understand. Homes flattened, a brother and sister conducting a puja for their departed mother, boats destroyed, nets tangled into enormous and useless balls of trash ... the laundry-list for this tragedy goes on and on. 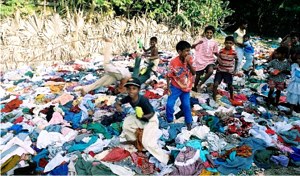 Kids are all over relief clothes on the outskirts of Pudupettai, Cuddalore District. Pic: Dilip D'Souza

To go with that, we've seen relief material and teams pouring into the area, much of it misguided if well-intentioned. Packets of cooked food lie around, unopened and rotting. Piles of old clothes lie around, unwanted and discarded. In places the unwanted old clothes lie so thick on the ground that kids turn cartwheels on them, or dive in headfirst -- sights I wouldn't have believed had I not photographed them myself. Yet even five days on, more of this comes in by the hour, to be left unopened or discarded in its turn.

In fact, in Pudupettai a huge load of old clothes actually arrived when the village was empty. The announcement on December 30 that a second wave might come in set off panic all along the coast. In Pudupettai, as I'm sure in a myriad other villages, the residents ran away in fear. A truck of relief workers, we must presume unaware of the warning, drove into Pudupettai right then, carrying a load of old clothes and cooked food. Finding nobody to give their stuff to, they simply dumped it around a statue in the village and drove off. Hours later, the villagers returned to find this small miracle.

Not that even a miracle made the clothes -- and much of the food, rotting already -- any more attractive to them.

Having been in previous disaster areas -- Orissa cyclone in 1999, Kutch quake in 2001 -- to me, there was a dismaying familiarity to tales like this. Haphazard and inappropriate, thoughtless and even patronizing: why is it that relief inevitably seems to take on those characteristics? Why do people send this stuff, why do so few think before doing it?

So today, it is encouraging to see a Tamilnadu Minister take a personal interest in the way tsunami relief happens in his state. It's only appropriate that outside in the quadrangle, surrounding the Minister's gleaming official SUV, is another huge pile of old clothes.

But if the Minister is the attraction, the man who actually speaks to us is fresh-faced Rajesh Ratnoo, the sub-collector here. Young IAS officer that he is, you'd be forgiven for thinking that he would be overwhelmed by the scale of this calamity, by the sheer volume of things to be done. But quite on the contrary, he is calm, thoughtful and in control.

He brings back another Orissa memory: of the excellent officer who went to work in Erasama, where the cyclone had been most destructive. Saroj Jha was an unknown young IAS officer in Bhubaneswar before the cyclone. Posted to Erasama when hell happened, he truly flowered in the craziness. He sat there making sense of the floods of material and volunteers and crises that showed up at his desk in rapid, endless succession.

I only spend minutes with Ratnoo, as opposed to the days I spent with Jha; but my first impression is just the same as then: this man has risen to the occasion, he's doing his job and finding ways to handle this nearly unimaginable crisis.

And nearly the first thing he tells us is, please, no more old clothes!

What's really required, Ratnoo goes on, are "life-support systems." In this part of the world, at this time, that's another term for "fishing equipment." Because the victims of the wave are largely fishermen, who lost boats and nets to it. (In fact, nets are the objects that are second-most widely flung about in the tsunami zone, after clothes -- though not by design. Everywhere, they lie around in hopelessly tangled clumps that contain everything from twigs to pots to, once in a while, decomposing human bodies). The "Honourable Chief Minister" has just approved a payment of Rs 100,000 for each boat lost and Rs 10,000 for each boat damaged.

In Pudupettai, we actually find government officials distributing the relief package, working their way systematically down a long list of village recipients.

•  Trust, but verify
•  The matter of relief

Until the effort to replace these essentials can be organized -- and as we learn here and elsewhere, NGOs are gearing up to do it as well -- the Government is giving victims what Ratnoo calls a "cushion": a package of money and supplies. Each family will get 60 kg of rice, 3 litres of kerosene, 2000 rupees to erect a temporary hutment, 1000 rupees for utensils, and another 1000 rupees for rations. A cushion that's worth 5000 rupees.

And to Ratnoo's and Ramachandran's credit, this package does not remain on paper. In the days that follow, all over the district, we find people who say they have received it. In Pudupettai, we actually find officials distributing it, working their way systematically down a long list of village recipients. At least here, at least in this respect, the Government is efficient.

And besides this package, besides the immediate business of relief, Ratnoo explains that he is starting to consider other issues. People feel alienated in the relief camps, he says, and they must be moved out as soon as possible. Water, as always, is a problem; a desalination plant is on its way from Gujarat. 23 new handpumps have been dug in "safe" locations -- though I wonder fleetingly how anything can be "safe" from an onrushing wall of water. The noon mid-day meal centres in the district's schools are being activated. Can you get the word out, he asks, that relief teams that come should and check with us before carrying on? That way, we won't have one NGO duplicating the work of another that's gone before, or duplicating our work.

All that; but today, Ratnoo has a trump card, a little something he really wants to let us in on. Proudly, he does.

In another village, Samiyarpettai, he put together a disaster management plan as a test case. He finished working it out with the village's residents only two months ago. Nothing earthshaking or novel in it; the plan uses simple ideas, common sense. For example, people were identified who could, when crises happen, offer medical help. Everyone in Samiyarpettai was told who these people were. For another example, he told them to use locally available materials to save themselves -- oil drums that float, tree stumps to cling to, and the like. The villagers held drills to practice these techniques. Importantly, they were assigned different responsibilities for calamities.

Dilip D'Souza was blogging while travelling in TN after the tsunami. His reports are at:

When the tsunami came last December 26, Ratnoo's plan worked spectacularly. 23 people died in the village, yes; but consider that Samiyarpettai is the largest village in that stretch and other villages had death tolls 5 and 6 times that number. What's more, over one hundred more villagers in Samiyarpettai were saved because of the measures in Ratnoo's plan. Those are remarkable numbers, a remarkable achievement. Ratnoo nearly glows as he speaks of those one hundred lives saved.

And it leaves me thinking: if Ramachandran and his "community leaders" are to shape destiny in this classroom, they might best do it by encouraging the spread of ordinary common sense. More power, in tsunami-ravaged Tamilnadu, to the likes of Rajendra Ratnoo.

Jan 14: I called Rajendra Ratnoo today. He answered in the middle of his son's birthday party, to which he has invited a number of children from the area. Children orphaned by the tsunami.

Dilip D'Souza writes regularly on the living conditions of India's downtrodden people. He is a regular columnist with rediff.com. He is also the author of two books Branded by Law: Looking at India's Denotified Tribes [Penguin 2001], and more recently, The Narmada Dammed: An Inquiry into the Politics of Development.