Idle generators in the midst of power deficit

The Southern region of India is expected to face high energy deficit this year while the Western and Eastern region will have a surplus of energy generation. Kannan Kasturi explains why such regional skew in energy generation and energy consumption exists and what it will take to resolve it.

Southern India is expected to face a severe electricity shortage this year. The Central Electricity Authority (CEA) in its latest annual forecast anticipates the energy deficit in the southern electricity grid to be over 11 percent, equivalent to a generation capacity deficit of 4000 MW. For Karnataka and Telangana, the forecasted energy deficit is greater than 16 percent.

Historically, India has been divided into five regional grids from an electricity distribution perspective – the Southern, Northern, Western, Eastern and North Eastern. The CEA forecasts a small deficit for the Northern region and a surplus for the Western and Eastern regions. The North Eastern region, while accounting for only a tiny fraction of all India electricity consumption, is also expected to have a large deficit.

The annual forecast results from an exercise, in which the electricity requirement and the available power for each state is collected and vetted by the CEA. The sources of power considered are both the public sector plants (belonging to the central or state governments) and private plants; however the forecast takes into account only firm contracts that are already in place between power producers and the distribution companies.

Energy deficit states may improve their power availability in the short term by buying electricity from surplus states during the year. It is also possible that actual demand turns out to be lower than projected demand, leading to a lower deficit. The numbers as they stand, however, predict a reversal of three years of decreasing power deficit in the southern region.

Before proceeding further, some clarification about CEA demand projections is in order. These projections are ultimately obtained from the electricity distribution companies (discoms) in the states and do not capture the full extent of demand for the following reasons.

The projections made by discoms are based on actual current usage and a projected rate of growth of demand for each category of customer, based on past trends. They are made assuming the limitations of the existing distribution network. The latent demand from a population left without service by the existing network, or from areas provided limited energy due to network limitations, do not figure in the demand projections.

Another issue with the demand projections is that discoms are supposed to compensate for the lower current usage figures resulting from scheduled and unscheduled power cuts (for example, the curtailed supply to irrigation pump sets).

Discoms by and large are not transparent about the power cuts they impose and the power outages due to faults, making independent estimation of the ‘unconstrained demand’ – the likely demand in the absence of power outages – very difficult. The CEA demand and deficit projections for the different regions need to be understood in the light of the above.

The regional skew in energy generation

Why do some regions have energy deficit and others have an energy surplus? Historically, electricity generation capacity was planned to keep each region self sufficient. Each state had its own power plants and the central government, while building plants in any region, also built the transmission systems to distribute power to the states in the region. Inter-regional transmission systems came up only on a case by case basis, typically if a part of the power from a central generating unit located in one region had been promised to a state in a neighbouring region.

This shows the increasing imbalance between generation and consumption in some regions. (Note: The generation capacity pertains to Dec 2009 and Mar 2015 respectively. The energy requirement for 2015-16 is as per CEA projection). 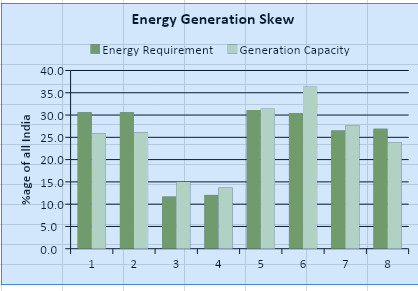 Electricity surplus in some regions co-existing with electricity deficit in other regions points to problems in wheeling electricity between the surplus and deficit regions. The rapid build-up of generating capacity in the western region requires a simultaneous build-up of transmission capacity to evacuate the power to the energy deficient regions. That this has not happened will become clear from the price pattern of electricity traded in the market in the different regions.

Electricity producers sell their surplus electricity in the short term electricity market after they have met their long and medium term contractual obligations. Over 40 percent (2013-14 figures) of the electricity that is available for sale in the market is traded through the Indian Energy Exchange (IEX). 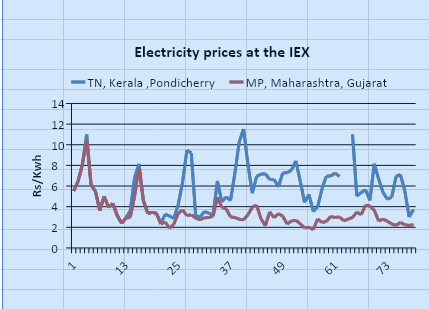 Since 2010, the prices in the southern region have ruled significantly higher than in the western region indicating that there are barriers to moving the electricity generated from the west to the south. The price in these western states has been range bound between Rs 2-4 /kwh from 2012 and below Rs 3/kwh since Nov 2014. The price in Chhattisgarh which is also part of the western electricity grid remains marginally lower. The range bound price over an extended period indicates that electricity supply may not be a constraint in this region.

IEX data shows that in the Northern region too, electricity tends to trade at a higher price than the western and eastern regions; however the price differences are not very large suggesting that the transmission capacity from east and west into the north may be nearly adequate. In fact, an examination of inter-regional flow data shows that power import into the northern region has been steadily increasing from an average 2800 MW in 2010-11 to 5300 MW in 2014-15, compensating for the deficit in energy generation capacity.

The power import into the southern region, on the other hand, has only marginally increased from an average 1200 MW to 1800 MW between 2009-10 and 2014-15 (This does not include about 1800 MW of power from an NTPC plant in Talcher, Orissa which is exclusively meant for the southern region and for which a dedicated transmission line exists).

The Central Government has periodically trumpeted the new inter-regional transmission capacity additions. Prime Minister Modi personally inaugurated the second of two Raichur-Sholapur transmission lines in August 2014. Together, the two lines were supposed to add 4200 MW of transmission capacity from the western to the southern region. As of June 2015, the increased capacity available has been less than a tenth of this at around 400 MW.

The reason behind this, it turns out, is that crucial transmission links from the generation clusters in the western region to its periphery with the southern region, which will allow the full utilisation of the Raichur-Sholapur lines, are delayed.

Other high capacity links from Chhattisgarh to Telangana and Tamil Nadu have also been stuck with the centre at the planning stage despite representations from the concerned states. The lack of urgency in implementing these projects, one suspects, may have something to do with political considerations.

After the government opened up power production to the private sector, the coal-bearing states of the western region – MP, Chhattisgarh, and Maharashtra – became the preferred destinations for private companies seeking to exploit the cost advantages of pit head power plants. This is the reason for the disproportionate build up of power generation capacity in the western region. The inability to deliver power to the load centres in the south has meant that many new plants are idling or operating much below capacity.

Even as the thermal (coal-based) generation capacity of private producers in these three states has gone up from 5.7 GW in April 2009 to 26.4 GW in April 2015, the Plant Load Factor (PLF) of these plants, the capacity usage indicator, has come down from 83.5 percent to 43.1 percent. Coal availability has not been an issue since 2014 because of higher production, adequate imports and low international prices. Low capacity utilisation is a consequence of the inability to sell the electricity.

The problem clearly is that generation capacity has increased without adequate expansion in transmission capacity connecting it to power deficit load centres. The greed of the private promoters who did not tie up their production in long term contracts with discoms, hoping instead to make quick profits through merchant sales, is partly to blame.

Merchant selling - sales against short term contracts - allows the producer to charge prevailing market prices for electricity. Some years back, independent merchant producers made a killing in an environment of scarcity. Long term contracts, however, are based on competitive bidding by different producers and will not yield such high margins. But long term contracts would have kept the focus on building the necessary transmission links.

The major part of the blame must fall on the central government. Plants unable to sell electricity translates to banks, mainly public sector ones, saddled with non-performing assets. Further, operational plants are only a part of the problem. In the coal-bearing states in the same region, work is at a standstill in many more plants that are in various stages of development, awaiting better prices for electricity.

The government has clearly failed in its responsibility of overall planning of the electricity network and allowed scarce national capital to be wasted in generation capacity that cannot be utilised.