Put in the water, take out the guarantee

Earlier, this tank was providing water for 600 trees only. Now 2000 trees are being irrigated from the tank itself for four months. Shree Padre as another success story, this one from southwestern Karnataka.
02 December 2008 -

Immediately after the monsoon vanishes in November, in a matter of six weeks, he puts in lakhs of litres of water beneath his four acre garden. This guarantees him enough water in his tank till the next monsoon for good irrigation.

This is the success story of U B Shrinilaya, 47, a Karnataka farmer from near Sullia in southwestern Karnataka. It was eight years ago as an experiment to reduce the soil acidity, he constructed a tiny check-dam across the drainage channel in his arecanut garden. This structure locally called as ede katta, is very inexpensive. One labourer can easily construct one ede katta in a day. Only local available materials such as split trunk of arecanut trees, soil and a plastic sheet is used. He had picked up information from an TV programme that filling water and releasing it alternatively would reduce the acidity. 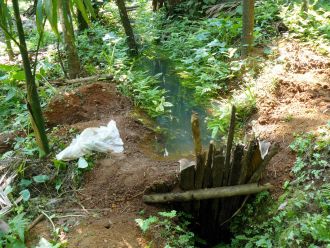 Ede Katta: This tiny check-dam locally knows as ede katta is made out of locally available materials. Pic: Shree Padre.

Whether the acidity got reduced or not is still not known, but this farmer learnt a big new lesson. Within a week, water was found in a nearby dry well. This is a good method to increase the water table, I learnt, he recalls, and thereafter extended that method to whole of my garden. The drainage channel is usually dug to transport the excessive water out of the garden. Shrinilya realized that his channels were silted up and dont hold enough water. Step by step, in two years and 60 man days, he got all the drainage channels deepened by about a feet.

Now, his four acre areca garden itself is his watershed. It is the overflow water from a tank situated at a higher level that flows in his garden for about 45 days. It dries up later. Shrinilya has dug up small channels to inter connect the drainage channels so as to spread the available water to whole of the garden.

Holding water for long durations in the drainage channels would suffocate the arecanut trees and affect the yield adversely. To avoid this, Shrinilaya releases the water to different areas and sees that the ede kattas would turn waterless for 3-4 days in between. To facilitate easy release of water, he has kept vents in all the ede kattas.

Time of constructing these tiny dams is not a fixed one. It depends on the ending of monsoon season. Within a fortnight of last rains, he constructs them. Seven of his ede kattas require only six man days. Subsequently, two of his dry wells  dug earlier by his father during water shortage  act as water table indicators. Water starts showing up at the bottom and remains so till he starts pumping out for irrigation.

See, the water level in the tank increases only by about three feet. But as I go on pumping that water, the tank gets refilled. Since the last seven years, Im not experiencing any water shortage.

•  Bit by bit, he filled it
•  Independence from borewells

Shrnilaya has two irrigation water sources. An earthen tank and a bore well. Earlier, the tank could provide water for only one hour of pumping for 5 HP motor. Now, the tank registers three feet higher water level than the nearby stream clearly indicating that its the benefit of checking water at the higher level.

Says he: The soil here is lose and collapses very easily. Already the tank has collapsed from all the four sides. The only solution we knew earlier to improve water availability was to take out collapsed soil, deepen the tank and construct retaining walls. This would have required thousands of rupees. Now, Im improving the water with an annual expenditure of only six man days.

Though water level in the tank increases only for three feet than earlier, it remains almost stable for the initial few months. Except for the last two months, it supplies water to all the four acres. Dependence on bore well is reduced. Now, he starts using bore well only in April for two third of the garden only. Earlier, this tank was providing water for 600 trees only. He had to depend mainly on bore well. Now 2000 trees are being irrigated from the tank itself for four months.

Moreover, the overall moisture in the garden is very good. Good grass cover grows all over. I irrigate the garden only for one hour using the sprinkler jet whereas some of my neighbors provide water for two or even three hours, Shrinilaya points out. 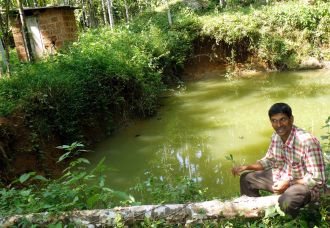 Interestingly, much of this development isnt visible for the eyes. See, the water level in the tank increases only by about three feet. But as I go on pumping that water, the tank gets refilled. Since the last seven years, Im not experiencing any water shortage. Month later after erecting tiny check-dams, he builds a sandbag katta (check dam) across the nearby stream. This further helps to build up the water level that slowly starts falling down by then.

Compared to the irrigation water, Im more benefited in the case of drinking water, says he pointing out to his drinking water tank. Unfortunately this tank, situated 100 feet away, below the level of the house didnt have good water source. As such, starting from January, they had to switch over to bore well water.

It was very uncomfortable for years, wife Vidya recalls, bathing in that water resulted serious hair fall for me and my daughter. All our utensils used to develop ash like layer from inside. The water was so hard that ordinary soaps were useless. We had to use detergents all the time.

Shrinilaya had almost decided to abandon the drinking water tank. It was at this juncture suddenly it occurred to him to harvest the roof water from the terrace of his house. A small pit, measuring about 1.5 cubic metre is dug in a corner. Most of the available roof water was brought down to this pit. Thats all. Surprisingly, from next year onwards, the tank doesnt dry if monsoon doesnt get delayed.

An avid reader of newspapers and magazines, he has tried one more tip to improve the water quality. Mat-like layers of algae used to grow in his drinking water tank. Shrinilaya has introduced one Vetiver float (Vetiver plants tied to bamboo splits to make the structure float on water) inside the tank last year. The algae mass has vanished dramatically, says he happily.