A club for change

Carl Pope, the executive director of the San Francisco-based Sierra Club, the oldest and largest grassroots environmental organisation in the United States, took his audience by surprise in Mumbai recently when he addressed them in chaste, if accented, Hindi. This harks back to the two years he spent in a village in Barhi, in what was then Bihar but now Jharkhand, as a young Peace Corps volunteer. It was 1967, and he was fresh out of Harvard. Bihar was facing a famine, and that could not but have impacted the impressionable volunteer, who was doling out condoms to help families keep the village population in check. It's an Indian connection that persists, since he has married a Mumbaikar.

The Club began, as its name suggests, as a movement to protect wilderness but moved on to larger issues, with the naturalist John Muir as its inspirational force. A few months ago, it polled its 1.4 million members across 65 chapters and 400 local groups in 50 states to find out what, in their opinion, was the issue that merited the highest priority. The overwhelming response: climate change. Its international director, Stephen Mills, has been touring India and China in recent months, to find out how these two major economies could be part of the solution instead of being viewed as the main obstacle to reducing greenhouse gas emissions. 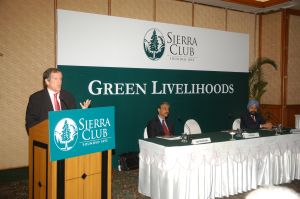 In Mumbai this April, at a function held in a hotel, Pope announced a Sierra Club US $100,000 (Rs.40 lakhs) annual award for a Green Energy and Green Livelihoods initiative in India. "The purpose of our award is to build public support for community organisations in India that are helping the country leapfrog past polluting and inefficient technologies, in order to create green livelihoods and a green economy. Effective grassroots organisations deserve more credit for helping to promote positive societal change. That's why Sierra Club has created this award. Our environment doesn't protect itself - civil society must actively be involved in the process," Pope said. Sierra Club will also be establishing a Centre for Green Livelihoods in India and partnering with civil society organisations to explore ways of creating a robust dialogue on developing a green economy. Pope pointed out that there were isolated projects adopting a low-carbon path across the country, which needed to be put in touch with each other. Sierra Club's initiative is meant to facilitate the exchange of information.

Pope pointed out how China was following a "20th century path", instead of a 21st century one, like Singapore, which was reinventing itself. If India followed a carbon-based development strategy for the next 30 years, it would not be able to compete in the global economy, he said. It would need three times the amount of oil it consumes today. Its reserves of natural gas and oil are limited and located at some distance from consumption centres, which is why it's a net importer of these fuels. Besides, it has no uranium. (At an earlier interaction with journalists, Pope had made no secret of his antipathy to nuclear power which, he claimed, would not solve India's enormous energy needs any more than America's. Hence, he felt the Indo-US nuclear deal was at best a diversion.)

Pope also talked about how it wasn't necessary for governments and non-government organisations to be opposed to each other, although that was the case in the US at times as well. He gave the example of how a Madurai government official resorted to some out-of-the-box thinking by reusing plastic bags to strengthen the durability of roads - a win-win solution, if ever there was one, of converting waste to wealth. The official melted waste bags and made pellets, which were added to the material used in road surfaces. The plastic in the bags helped bind the surface and made it that much hardier. This was an unusual display of an official initiative towards solving a problem.

If India followed a carbon-based development strategy for the next 30 years, it would not be able to compete in the global economy, Carl Pope, the executive director of the San Francisco-based Sierra Club, said. It would need three times the amount of oil it consumes today. Its reserves of natural gas and oil are limited and located at some distance from consumption centres, which is why it's a net importer of these fuels.

Sunil Deshmukh, a founding member of Sierra Club's India Advisory Council, hails from Sangli, and was a former commodity trader in Wall Street. He worked with Goldman Sachs and Citibank in the US, but retired prematurely in 1994 to devote himself to a range of causes, including the Maharashtra Foundation, which funds small projects in his home state. "However, the reliance of both India and America on carbon fuel does not come without a steep long-term price for both countries. Hence, the importance of recognising those working at the grassroots to cut carbon emissions in innovative ways." The awards have funding for three years and among its financial supporters are 12 Non-Resident Indians (NRIs), including Deshmukh himself and New York based-real estate businessman Pritpal Singh Kochar, who was also present at the launch.

The Sierra Club award winner will be decided in consultation with an Indian nomination board and a jury comprising Indian, American and NRI environmental experts. Three organisations will be short-listed for the final choice.

Many Indians at the event were, in private, skeptical about Sierra Club's motives in launching this initiative. Some wondered whether it was a subtle move to pressurise India and China, where it will also have similar awards, to control their carbon emissions, thereby leaving the US and other polluters off the hook. However, director Mills clarified: "Our India initiative will in no way reduce the vigour of the Sierra Club's campaigning to push both the American public and our government to drastically reduce the over-consumption of natural resources. We are very aware that industrialisation in America and Western Europe caused the climate crisis, but the fact is that the impact of global warming will be felt globally, particularly in India. We must collaborate on both economic and environmental solutions." Pope, who had titled his book on his Bihar experience An American Misadventure, added: "We should not advocate policies for India, only create connectivity."

At his meetings in Mumbai, Pope revealed that he and fellow environmentalists were anxiously waiting for a post-Bush era. "On January 21, 2009, we will be ready to join the world!" he exulted. All the three US Presidential frontrunners had indicated that they would enact binding commitments - though, presumably, not necessarily sign the Kyoto Protocol - to reduce emissions. Senator Barack Obama has vowed to reduce them by 60-80 percent, which will exceed the European Union's goals.

Pope said that cities and states in the US were "independently ratifying" the Kyoto Protocol. As many as 700 cities had signed a pledge to turn "cool" while 20 states had set climate change goals that actually exceed the limits set by Kyoto. This covered 60 percent of the US population. Half the 50 states had also committed to meeting 45-50 percent of their energy needs by wind and solar by 2030-2040.

Asked whether renewable energy wasn't an expensive solution, Pope said that generating electricity from solar photovoltaics was expensive. Besides, large wind farms needed land, always in short supply in India. However, Pope is hopeful that solar cells could prove cost-effective in rural areas without power. The desert in north-west India might conceivably be the best location in the world for solar energy, with the exception of the Sahara, he added.

Pope said solar power could be generated at costs lower than those at coal-fired plants. Besides, there would be no foreign exchange expenditure, unlike with oil and gas. However, at earlier meetings, Pope indicated that he was thinking of gigantic-scale solar power generation in Rajasthan, which would at least partly defeat the object of the exercise as that power would probably not be available to rural consumers. Such a large-scale operation would call for a huge investment and the power that would be generated would obviously be sold to the grid, and not delivered to those who live in the vicinity, who wouldn't be able to afford it in any case. Household solar units alone would be able to meet local needs. While the energy would be green, it would not create livelihoods - at least in remote regions where they are most needed.

Pope admitted that there were issues relating to the establishment of large wind farms in India because of inheritance laws which sub-divided land and made them uneconomical. Because agricultural land is typically broken up into smaller and smaller units with each succeeding generation, the rural poor own tiny plots that no large wind farm owner will be able to buy because of poor titles, resistance and litigation (as is the case with Special Economic Zones). In the US, by contrast, farmers own huge tracts, which are easier for such operators to purchase from a single owner. This was why Suzlon, now one of the world's largest manufacturers of wind turbines, had to buy land to set up these farms. In the US, there is no such obstacle, which is why, for instance, on a highway from San Francisco to Los Angeles, one can pass mile after mile of rapidly rotating wind energy converters. But, as Pope observed, for global warming to be kept in check, three countries - the US, India and China - would have to get things right.