The relationship between professionals such as doctors, lawyers and teachers and the society they serve is increasingly and radically changing. The reasons behind the same, however, may go deeper than the obvious mercenary tendencies of the former. Shankar Jaganathan ruminates.
22 April 2013 -

Yesterday on my morning walk I met a doctor. As our strides matched and we moved in tandem, our conversation turned to the decline of general medical practitioners in the city. My visit to a doctor is infrequent and limited only to neighbourhood clinics and hence, I feel their absence the most.

I recalled with a smile my first visit to the old general medical practitioner, located 500 meters from my house. After he conducted a detailed check-up and wrote out the prescription, I gently asked him, ‘Doctor, how much do I owe you?’ A true professional, in a soft tone he replied, ‘You don’t owe me anything. But twenty rupees will do.’ As I dug back into my memory, in a few relationships, as with the doctor, teacher, lawyer and auditors, money was never openly discussed. Only after the problem was resolved, reverently and in a hushed tone the question would be asked and the professional would indicate his fee. 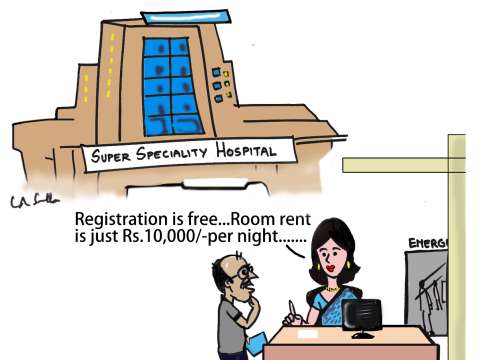 Mastery of an intellectual skill, adherence to a common code of values and conduct, acceptance of a duty to the society as a whole in return for the use of a title is the hallmark of a profession, as defined by the International Federation of Accountants, the latest entrant to the professional class. This definition neither mentions a fee nor compensation. Looking at our tradition, this does not seem to be an omission, but a conscious decision. Fee or compensation was an essential part of the profession but not their primary motive.

My walking companion, also an old timer, explained to me the economics of the current medical practice. Most new doctors he told me now pursue post-graduation. After their post-graduation, doctors find employment in a multi-specialty hospital more fruitful. I asked him how working for another person could be more fruitful compared to being a self-employed professional. The doctor elaborated, in the past for a medical practitioner, starting a clinic required only a 10-by-15 room, a table, chairs, stethoscope, few minimal equipments, a cupboard for stocking essential medicines and a few old magazines. With a few thousand rupees, any doctor could start his practice. However this was not the case today as practicing medicine required large investments.

In a few relationships, as with the doctor, teacher, lawyer and auditors, money was never openly discussed. Only after the problem was resolved, reverently and in a hushed tone the question would be asked and the professional would indicate his fee.

•  The doctor keeps away
•  Struggling to go beyond the basics

The advent of corporate hospitals with multi-storeyed nursing homes changed the scenario. A larger premise and wider range of expensive equipments meant that the investment required multiplied from a few thousands to a few crores. With increased investment came the accountant and the accounting software. Now patients were no longer patients, they were the customers who generated revenue. Doctors became cost centres. The software helped hospitals analyze the income generated by the doctor – not just from their own consultation, but also their referrals to diagnostic labs like X-rays, MRI and CT-scans. Doctors now had to earn a return on investment made in expensive equipments. Thus the service economy expanded rapidly driven by the new professional.

True economics was practiced in the growing service economy. Menu cards for the new professional appeared. Patients, clients and students were replaced by customers. A need just remained a need. Unless backed by purchasing power, a human being did not become a patient, client or a student. Doctors, lawyers and teachers in their institutional garb became new professionals. Fees are first discussed, services follow later. In their corporate form the distinction between professionals and mercenaries blurred. All this in a land where, a hundred years ago, running restaurants was considered an immoral way to earn a livelihood, as feeding hungry travelers for money was frowned upon by society. Why go back centuries, even a decade or two ago, not sharing drinking water with a hiccupping stranger was considered uncouth behaviour!

Those were the days when professionals were revered. On a hot afternoon, along with a few colleagues we visited a retired judge at his residence. We were welcomed with a glass of cold water. Soon thereafter, the judge came into the room and all of us stood up save one. After the visit, when we were returning, my professional senior rebuked the sole sitting member and spoke of the need to respect professionals. He said professionals like teachers, doctors, lawyers and judges should be honoured. He added a professional stood by his ethics and shunned material gains to serve the society. The least we as members of the society can do is to honour them in little ways, by standing up when they enter and giving them the right of way when our paths intersect. My ‘sitting’ friend disagreed, murmuring under his breath the practice of meaningless rituals.

Later my ‘sitting’ friend argued, we have professional sportsmen, actors and politicians. How are the earlier professionals like doctors, lawyers, judges, journalists, teachers and auditors different? A professional in his view is a specialist, a person paid to do their job. Instead of the link between ethics and service, he only saw the bond of money, thus highlighting a serious perception gap. For those devoted to the question of what came first, the chicken or the egg, a more immediate problem needs their attention - Did the lack of respect for professionals from the society lead to mercenary behaviour or did mercenary behaviour lead to lack of respect from the society for professionals?

PS: In this article, the doctor is mentioned in order to illustrate a prevailing practice. A similar situation holds true in many other ‘professions’.

Shankar Jaganathan is passionate about corporate governance, sustainability practices and economic history. He divides his time between consulting engagements, teaching and writing. He is the author of the book 'Corporate Disclosures 1553-2007, The Origin of Financial and Business Reports', and the recently published 'The Wisdom of Ants, A Short History of Economics'.