/ IN THE SPIRIT OF THE CONSTITUTION

It is an opportunity for the President to assert the authority and independence of his office by rejecting a clearly political move that is a slap in the face of constitutional morality, writes Nitin Pai.
04 July 2013 -

The UPA government's Food Security Bill (brief) is likely to cause severe damage to the Indian economy, while saddling future generations with an open-ended spending commitment that will be hard to wind down. The government's own Commission on Agricultural Costs and Prices and the Expert Committee (report) headed by the chairman of the Prime Minister's Economic Advisory Council (report) have argued against it. As Ravikiran Rao argues in Pragati, the scheme will not only widen India's gaping fiscal deficit, but severely distort the national food supply chain.

But you do not have to agree with the bill's critics to acknowledge that a bill on which there is no consensus even among the government's top economic experts, which imposes a burden on future generations, at a time when the Indian economy is in doldrums and the investors, domestic and foreign, are wary about investing in India, should not be implemented in a hurry.

Yet that is exactly what the UPA government is attempting to do. After emotional blackmail.for which purpose Nobel laureate Amartya Sen was recruited.failed to persuade parliament in the previous session, the Union Cabinet has now decided tosneak it through an ordinance.

Under the Constitution, an ordinance is an emergency provision, equipping the Executive to implement measures when the Parliament is not in session. The ordinance must be approved by both houses of Parliament the next time they convene and "shall cease to operate at the expiration of six weeks from the reassembly of Parliament". What is important to note is the debates in the Constituent Assembly, the wording of the Constitution and Supreme Court judgements are clear that issuing ordinances is an emergency provision to be used at extraordinary times. Chief Justice P N Bhagwati, heading a Constitution Bench in D C Wadhwa vs. State of Bihar held that ... 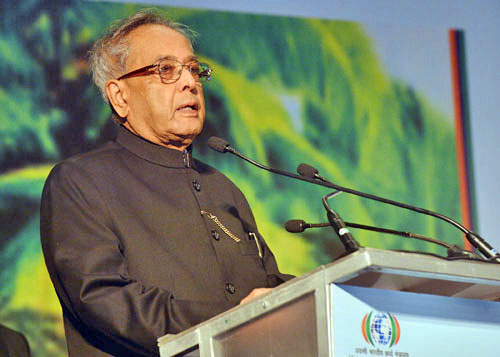 "The power to promulgate an Ordinance is essentially a power to be used to meet an extraordinary situation and it cannot be allowed to be 'perverted to serve political ends'. It is contrary to all democratic norms that the Executive should have the power to make a law". [1987 AIR 579, 1987 SCR (1) 798/IndiaKanoon]

There is no doubt that there are many right-thinking Indians who believe that the food security bill is a good thing. However, it will be hard for any reasonable person to conclude that the situation in India is dire enough to bulldoze constitutional and democratic norms and present parliament with a fait accompli.

The Union Cabinet's decision to implement the food security bill.that is still in Parliament.through an ordinance flies against the face of the letter and spirit of the Constitution. Justice Bhagwati's ruling is clear.an ordinance can only be used to meet an extraordinary situation, not perverted to serve political ends.

There is no doubt that there many right-thinking Indians who believe that the food security bill is a good thing and that it will even provide food security as intended. However, it will be hard for any reasonable person to conclude that the situation in India is dire enough to bulldoze constitutional and democratic norms and present parliament with a fait accompli.

The argument that the ordinance is necessary because Opposition parties have not allowed Parliament to function does not wash. While the BJP has provided the Congress party with a seemingly plausible excuse, the Union Cabinet is bound by the Constitution. It is sworn to uphold the Constitution. It cannot refuse to perform this duty merely because the Opposition is not playing by the rules. If we are to buy the premise that two wrongs make a right, we are either in a jungle or in a banana republic.

President Pranab Mukherjee is perhaps sympathetic to Sonia Gandhi's ideological persuasions. As a life-long Congressman, he might be inclined towards the party's socialist leanings. Yet when the ordinance comes before him, the only question he must ask is .Is there an extraordinary situation that demands this ordinance?. Parliament convenes in a few weeks. Can this not wait until then?

The Indian Republic's history is replete with presidents, who despite being lifelong Congressmen, have had the integrity, courage and statesmanship to question Congress-led governments. It is up to President Mukherjee to decide whether he wants to be a Fakhruddin Ali Ahmed or a Rajendra Prasad.