Private, but not above the RTI

Recently, the Chennai High Court ruled that a PPP project falls within the ambit of the RTI Act. The court's reasoning gives hope for a more liberal interpretation of the law itself in the future. Shripad Dharmadhikary reports.
16 May 2010 -

India's National Water Policy, adopted in 2002, says that "Private sector participation should be encouraged in planning, development and management of water resources projects ...". Among the various benefits of private participation listed is "improving ... accountability to users". One of the main enablers and indicators of accountability is transparency. But promoters of privatised water (and other utility) projects are unwilling to be subject to the Right to Information Act. Their competitive interests, they claim, would be hurt by transparency, and on this count they claim exemption from RTI. Governments have also tended to nod in agreement with the promoters, rather than challenge the view closely.

With the result that the question of transparency in Public Private Partnerships landed in the courts instead. And here the demand for open-ness has met with some success. Recently, the Chennai High Court has struck a blow for transparency and accountability by bringing a PPP project under the ambit of the RTI.

In 2005, India's largest privatised water supply project was launched in Tamilnadu. This was the Tiruppur Water Supply and Sewerage Project, supplying water to the large number of industrial units in the Tiruppur region in Coimbatore district, and domestic bulk water to the Tiruppur Municipality and a number of way-side villages. The Tiruppur region in Coimbatore district in Tamilnadu is India's largest producer of cotton knitwear, and has a thriving export business. This industry is highly water intensive, and water scarcity was identified as one of the crucial problems facing the industry.

The Tiruppur project, with an outlay of Rs.1023 crores, was projected as a model PPP project since its launch. It is operated by a Special Purpose Vehicle, the New Tiruppur Area Development Corporation Limited (NTADCL), which is promoted by the Tiruppur Exporters Association and Tamilnadu Water Investment Company Ltd (TWIC). TWIC in turn is owned by the Government of Tamilnadu, and Infrastructure Leasing and Financial Services Limited. 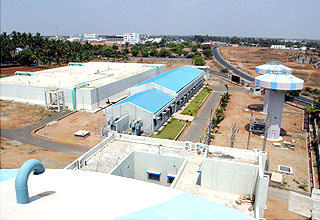 Since the Tamilnadu government was substantially financing the NTADCL and was also giving a number of guarantees and other concessions, there should have been no doubt that the NTADCL fits this definition of a Public Authority.

•  Extending RTI to bourses?
•  Jobs for the boys

As this project was being presented as a highly successful model of PPP, my colleagues at Manthan (the organisation of which I am the coordinator) decided to take a closer look. To obtain information about this project, we sought information from the NTADCL under the RTI Act in October 2007. The NTADCL rejected this request arguing that it is not a public authority as defined by the RTI law, and hence not required to disclose the information sought. This was overturned on appeal to the State Information Commission in March 2008, which ruled that the NTADCL is indeed a public authority and should provide the information.

NTADCL, however, didn't give up its resistance; it appealed the Information Commission's ruling to the Chennai High court. This too proved futile in the end; the court's order, given on 6 April this year, upholds the SIC's view, that NTADCL should be considered a public authority, and is therefore covered by the RTI Act.

What is a Public Authority

To understand the import of this ruling, let's look at the RTI Act's provisions more closely. The term 'Public Authority' is defined in Clause 2(h) of the law passed in 2005. Apart from the obvious public sector bodies the definition "includes any - (i) body owned, controlled or substantially financed; directly or indirectly by funds provided by the appropriate Government."

Since the Tamilnadu government was substantially financing the NTADCL and was also giving a number of guarantees and other concessions, there should have been no doubt that the NTADCL fits this definition of a Public Authority. However, the NTADCL argued that out of the total equity of Rs.322.7 crores, TWIC held Rs.105 crores. In TWIC, IL&FS held 54 per cent and the TN Government held 46 per cent, hence the contribution of the TN Government in NTADCL would be about Rs.48 crores. Counting some other contributions, the TN Government overall held 17 per cent of the equity of the project. This, the NTADCL claimed, could not be counted as "substantial" and hence, the Tiruppur project should not be considered a public authority.

The RTI Act does not define what exactly is meant by "substantial", the Court, in its ruling, has gone into considerable detail on this. The Court makes an important observation that the term "substantially financed" must receive a liberal interpretation because any clause of the RTI Act must be interpreted in the context of its objects and reasons, which are to bring in transparency into governance. It also relies upon an earlier High Court order to state that substantial does not mean higher percentage of the amount.

It also refers to the provisions of the Controller and Auditor-General's (Duties, Powers and Conditions of Service) Act, 1971 (Central Act 56/71). This Act authorises the Controller and Auditor General to audit receipts and expenditure of bodies or authorities substantially financed by the Union or State Revenues. Section 14(2) of the Act allows the CAG to audit any organisation (with the permission of the President or the Governor) where the Government grant or loan is more than Re.1 crore. Thus, with much more funding than this, NTADCL can be construed as substantially financed by the Government, the Order finds.

However, the more important part of the Order is the one which upholds another contention - namely, that since the NTADCL, even if part private, is performing essentially a public function - of water supply, it must be open to scrutiny under the RTI Act. The Order has upheld this argument. It is worth quoting somewhat at length the Order. The Court has said:

"The issue raised herein should also be looked into from the nature of the project carried out by the petitioner company [NTADCL]. It is an admitted case that the petitioner company was engaged on a Build, Own, Operate & Transfer basis to execute water supply to Tiruppur Corporation and the other areas and also to provide for sewerage treatment system.

"Under Article 243(W), it is the responsibility of a Municipality to provide subject to the provisions of the Constitution and law made by the State legislature to have power and authority to carry out the responsibility conferred upon them including those matters listed under XII Schedule to the Constitution. XII Schedule prescribed under Article 243(W) item 5 relates to water supply for domestic, industrial and commercial purpose. Item 6 related to public health, sanitation, conservancy and solid waste management. Therefore, the activity that is undertaken by the petitioner company is essentially a power vested on the municipal authority under Article 243(W) read with items 5 and 6 of the XII schedule to the Constitution.

"When a State Government instead of itself undertaking a work, if it allows an agency like the petitioner Company by substantially funding them to undertake such work which is essentially that of a municipality, no one can say that such work of the petitioner company as a private activity. On the other hand, it is very much a public activity over which public interest can generate."

The Order not only states this, but takes this to the logical conclusion saying,

"When Constitution had mandated the local bodies to discharge such functions [as water supply] and the State legislature had created a local body with the essential function of water supply and sewage treatment and if that work is entrusted to another body corporate, certainly that body corporate discharges functions akin to a local body. Therefore, every citizen has a right to know the working of such bodies, lest they may be fleeced by such companies which until the BOOT period must explain to the people about their activities. Transparency in their functioning and the right to know by the citizen can never be curtailed on the plea of the petitioner company before the Commission."

This order is important because the principles outlined in the order strengthen the arguments for all public-private-partnerships (or privatised) projects especially in water, health, education etc to come under the ambit of RTI.

Since the NTADCL can possibly appeal this order, this may not be the last word on it. Notwithstanding this, there is little doubt that this is an important Order enhancing the transparency and accountability of Public Private Partnership projects which seem to be one of the main vehicles of infrastructure development and provision of public service being adopted by the Governments.