Should there be a Nobel for economists?

Winner of the 2013 Economics Nobel, Robert J Shiller adds the latest perspective to a long-standing, heated debate on whether Economics can be called a science at all, and if it merits the prestigious award. Shankar Jaganathan recounts the many points of view on the subject.
19 November 2013 -

Since its inception in 1969, the association of the Nobel Prize with economics has been steeped in controversy. The Nobel Memorial Prize in Economic Sciences for the year 2013 does more to fuel this controversy than douse it. An interesting contributor to the debate this year is Robert Shiller - one of the three winners of 2013. However, the newly crowned laureate is neither the first nor the only laureate to have a point of view on this debatable topic.

Friedrich Hayek, the 1974 winner, expressed his concern in no uncertain terms when he said that if he had been consulted he would have advised against the institution of this prize. He reasoned that awarding the Nobel Prize gives the recipient an authority, which no individual in economics should possess. Elaborating further he noted that in the natural sciences, the winners' sphere of influence is limited to their fellow professionals who have the wisdom to handle it. With economics, the winner's influence extends to laymen, politicians, journalists, and bureaucrats and hence could be dangerous. 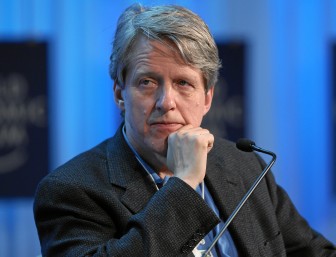 In the eyes of some discerning observers, recognising both Fama who held that markets are efficient and Shiller (above) who saw markets as irrational at times was, to say the least, contradictory. Pic source: Wikimedia

Hayek's words proved prophetic when a simple instrument like mortgage, that enables needy tenants to buy their own homes on credit, was turned into a short-term money making machine by the financial markets. Contributions from around thirty Nobel Laureates in Economics who justified promoting property rights, developed methodology for pricing financial market instruments and advocated deregulated markets as the only solution for economic problems seeded a rapidly exploding derivatives market that grew to ten times the global GDP and four times the global financial assets. It came as no surprise to many serious observers, therefore, when the mortgage markets froze in 2008 as it was unregulated and the market participants were fed on the steroid of personal incentives.

The mortgage crisis that began in the United States soon engulfed the entire world. Crippled economies limping back to normalcy but with soaring unemployment pushing people below the poverty line - especially in Europe - is an unpleasant reminder of Hayek's acumen. It is in this context that the 2013 winners and their contributions should be seen.

Eugene Fama, Lars Peter Hanson and Robert J Shiller were recognised in 2013 for their work on understanding how asset prices are determined in the financial markets. Their core contribution can be captured in brief. Fama is credited with formulating the Efficient Market Hypothesis, a belief that markets are efficient. Hence, timing the market to realize gains is not a predictable winning strategy. However the Nobel Prize Committee, in their award announcement, highlighted two of his observations - that short term price movements are difficult to predict and that new information is quickly absorbed by the markets.

Shiller on the other hand was recognised for asserting that price movements over longer periods are predictable. Based on a historical analysis with data for a hundred years, he empirically showed that share price movement can be predicted when considered along with their dividend track record. A high ratio of price to dividend tends to fall over time and conversely increases when the price to dividend ratio is low. The third winner Hansen was recognised for developing a statistical model called the Generalized Method of Movements to test various asset price theories.

Reaction to the 2013 Nobel Prize awards were along predictable lines. Individuals who believed that faulty economic theory was at the center of the mortgage crisis criticised the respectability provided by the award to what at best are un-validated theories. This aspect of unvalidated theories was acknowledged by the awarding committee itself when in their scientific background note, they acknowledge, "Although we do not yet have complete and generally accepted explanations for how financial markets function, the research of the laureates has greatly improved our understanding of asset prices and revealed a number of important empirical regularities as well as plausible factors behind these regularities."

In the eyes of some discerning observers, recognising both Fama who held that markets are efficient and Shiller who saw markets as irrational at times was, to say the least, contradictory. Paul Duguid, a professor at the University of California, Berkeley remarks that this is like recognising two doctors for the Nobel Prize in Medicine, one of whom accurately predicts heart attacks and the other who declares heart attacks don't exist.

Shiller's defense of the Nobel Prize in Economics, after he won the award, is probably prompted by this contradiction that generated a heated debate on whether economics can be called a science at all, as it has been by the Nobel Prize committee. Shiller analyses first why the prize is 'for Economic Sciences', when other prizes for natural sciences are not called Physics Sciences or Chemistry Sciences.

Tracing history he notes that the term 'science' is associated with disciplines like political science and astronomical science to separate them from their disreputable cousins.partisan political tracts and astrology. Turning to current day economics and the Nobel Prize for the same, he notes that the prize is 'designed to reward those who do not play tricks for attention and who in their sincere pursuit of truth, might otherwise be slighted.'

Despite Shiller's sincere defense, the matter is far from being settled. Paul Krugman, another Nobel laureate, notes that while economics can be and is sometimes a scientific field as its theories are testable, many economists treat economics like theology. The implicit inference is that there could be more belief than proof in the many economic theories that abound. It is this concern that makes Hayek's reservation all the more relevant as we reflect on the Nobel Memorial Prize for Economic Sciences each year.