OP-ED / RTI FOR EVERYONE

Ushering in change, the Ningamani way

On learning that she could find out why her widow pension was being delayed, she made her grandson write out an RTI application on her behalf. When she got her pension, I realised how powerful this law could be, writes R Balasubramaniam.
10 August 2010 -

Death always brings along with it a feeling of sadness. It also leaves you thinking about the after-life and what lies in store for a person after death. I felt alone and empty when my father died a few months ago. I felt sad and lost when I heard about the death of Ningamani a few weeks ago. My only contact with Ningamani was for a few minutes, almost two years ago during the Jaagruthi Yathre, a walk organised by the Swami Vivekananda Youth Movement to spread awareness about the Right to Information, social audits, and informed citizenship.

It was the 18th of September 2008. We were marching towards Sattegala village in Mandya district of Karnataka, and had reached what the local villagers called the Sattegala circle - a busy intersection. There were a lot of people milling around the many small shops that abounded this area. The sun was bearing down in all its might and I was feeling tired and hungry. I spotted a shady tree and went and stood under it to gather up some energy.

I found an elderly lady there, selling flowers. Seeing me, she asked me what I was doing there. Hesitatingly I explained to her my mission and was hoping that the conversation would be short. Ningamani would not let me get away so easily. She wanted to know why I was carrying so many books with me and what was in them. More out of courtesy than out of wanting to make her aware of RTI, I explained to her the Act and told her how it could be used to get things done in a rural area. I also told her that the book would cost Rs.10. 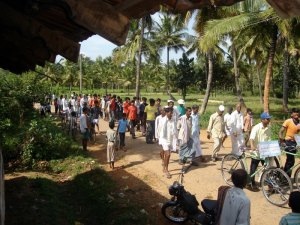 Ningamani represents the emergence of a resurgent India - an India where every citizen feels equal to everyone else and gets the Government machinery to treat them as such. (Above: A picture from the Jaagruthi Yathre.)

What left me dumbfounded was her spontaneous response. She told me that since i had walked from so far for a good cause, she had to encourage me and buy a book from her meager income. For a moment, I felt touched by her compassion, but silently wondered what this old illiterate woman would do with the book.

I found my answer a couple of months later. I had asked my colleague Shekar to travel along the same route again to find out whether our walk had made any impact on the lives of thousands of people that we had met and interacted with. As he reached the Sattegala circle, he found Ningamani sitting at her usual spot and selling flowers. He met her and explained why he had come. Ningamani was overjoyed on seeing him and gave him a warm hug and a joyous welcome. She explained to him how, many months ago, an elderly person (i hadn't realized how old my gray hairs had made me look!) had sold her a book for ten rupees.

Having paid virtually her day's earnings, she had taken the book home and got her grandson to read it for her. On learning that she could find out why her widow pension was being delayed, she had made him write out an application on her behalf. She had applied under the RTI Act and had asked the Tahsildar why it was taking more than 4 years for her to get her rightful entitlement. She was surprised when a week later, the local village accountant met her and gave her the pension orders. Instead of an answer, she had got what she wanted!

On hearing this from Shekar, I realised how powerful this Act is, and how well one could use it to usher in development and create an empowered rural community. More than just the pension, I realised how this Act was helping bring in real participatory democracy. Just imagine how powerful this elderly, illiterate woman would have felt to get an insensitive and non-responsive Government to listen to her! If this is not democracy, what else is?

Ningamani represents the emergence of a resurgent India - an India where every citizen feels equal to everyone else and gets the Government machinery to treat them as such. It is the slow and silent change that is now happening in different parts of India; change which will eventually overpower the corrupt and the powerful and give true power to people to whom it rightfully belongs. Ningamani may have died, but she leaves behind a legacy which our current political and bureaucratic system will have to respond and become accountable to.