Suicides due to poverty: How reliable is our data?

While researching suicide data published by the NCRB, Shambhu Ghatak files an RTI enquiry on how the Bureau identifies causes behind suicides and compiles the data across states to arrive at national figures. The response reveals the lack of clarity in the exercise.

Accidental Deaths and Suicides in India 2012 (ADSI 2012), a report produced by the National Crime Records Bureau (NCRB), provides 22 different causes behind suicides in the country. According to this report, family problems (25.6 per cent) and illness (20.8 per cent) accounted for a majority (46.4 per cent) of total suicides committed in India during 2012. Insanity/ mental illness accounted for 6.4 per cent of total suicide deaths.

While identifying the incidence of suicides due to such specific triggers, the report also ranks states in order of the number of suicides reported due to a particular cause. Thus, for instance, it was found that suicides caused by poverty were mostly reported from Andhra Pradesh (1,096), Karnataka (364), Maharashtra (245) and Assam (219). In the 'so-called' industrialized states of Maharashtra (258) and Gujarat (224), suicides caused by unemployment were the highest.

Out of the 23,398 number of suicide deaths reported in 2012 among young males aged 15-29 years, most were caused by family problems (23.3 per cent). Unemployment and poverty accounted for 3.1 per cent and 2 per cent of suicidal deaths respectively. 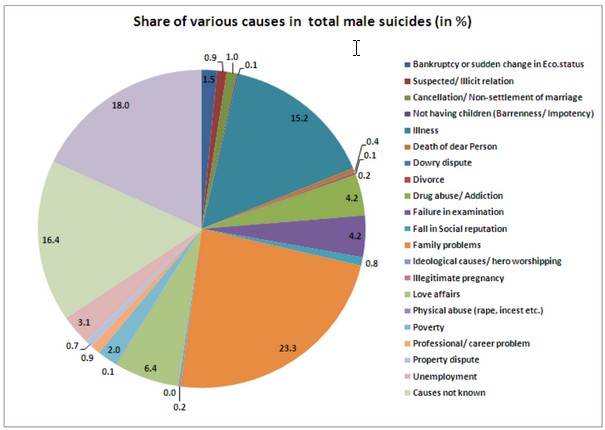 Out of the 18,395 number of suicide deaths in 2012 among young females of the same age group, most were triggered by family problems (27.8 per cent). Poverty and unemployment each stood for less than one per cent of suicides in this group. 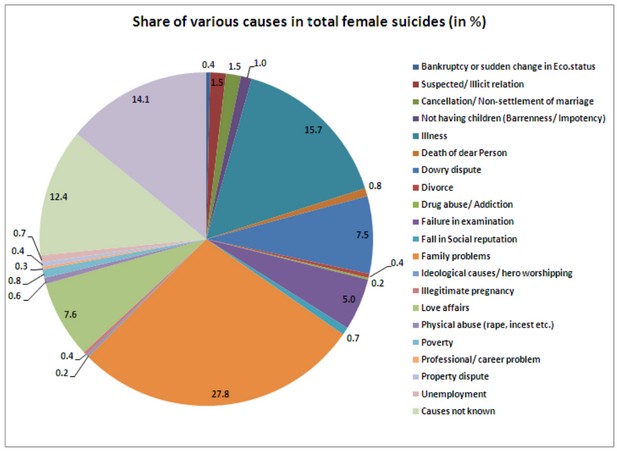 Aggregated statistics such as this made me curious: what are the definitions of poverty and unemployment used to arrive at these figures and how do the states actually ascertain the cause of suicides? Is there uniformity in the manner in which this is done? Accordingly, I filed an RTI enquiry on 10 October, 2013 with the CPIO, Ministry of Home Affairs, New Delhi asking them three questions.

My query, which was received by the Ministry of Home Affairs was further forwarded to the concerned department, that is the NCRB in this case, on 15 October, 2013. The NCRB in its reply dated 11 November, 2013 (letter No. STT(200)/RTI-ADSI/325/13/NCRB) informed me that: "NCRB collects data on suicides in a prescribed format which contains 22 specified causes for committing suicides. Two causes namely poverty and unemployment are among the specified causes. NCRB has not defined any causes including poverty and unemployment in the format. The States are filling the figures in the format at their discretion." (Emphasis added) The NCRB also furnished the relevant portion of the format.

What does the NCRB's reply mean? The reply to my query from the NCRB clearly implies that the definition of 'poverty' as followed by the Planning Commission, and 'unemployment' as used by the National Sample Survey (under the Ministry of Statistics and Programme Implementation) deviate from that of the NCRB. If states have indeed been filling the forms at their discretion, it is only likely that the definitions of various causes of suicide deaths vary across the states.

This obviously raises the following question: How can these numbers under a certain classification (say 'poverty') then be added to arrive at a national level figure? The methodology of aggregation is seriously flawed.

It is also pertinent to mention here that some states, guided by the populism motive, may have been following their own definitions of 'poverty' while identifying below poverty line (BPL) households, which differ from the Planning Commission's definition. The same, however, cannot be said about 'unemployment'. But the fact that the NCRB itself does not have an inkling of the basis on which the states are providing statistics for "suicides due to unemployment" leaves a grey area around that as well.

In my RTI, I had deliberately confined myself to enquiring about the definitions of 'poverty' and 'unemployment' followed by the NCRB, since these are likely to have a definite scientific or statistical basis. The reply to the enquiry was therefore particularly perplexing. Had I asked about the definition of 'love affairs', such an answer would perhaps have been acceptable.

Secondly, it is undoubtedly difficult to differentiate one suicide from another, based on the causes as identified by the NCRB. For example, 'unemployment' may lead one to 'bankruptcy or sudden change in economic status', which can further trigger 'poverty'. Differentiating these three causes in the absence of a proper definition for each of these is a difficult task. To aggregate data across geographies in the absence of a standard or definition and arrive at authentic national data is even more impossible. It is really surprising that the NCRB has accomplished both with such ease.

In an earlier article for India Together, I had pointed to the significant variance between suicide data as published by the NCRB and in a study by leading medical journal The Lancet, titled "Suicide mortality in India: A nationally representative survey (2012)." In view of the present admissions by the NCRB in response to the RTI, it appears that the data presented by the Bureau should be opened up to more scrutiny.