Paying no heed to groundswell of opinion

A range of criticisms raised at a recent seminar in Mumbai are a sufficient indication of the extent to which SEZs are being pushed as a government policy without any public consultation on their pros and cons. The seminar, on SEZs and their implications for urban planning, was held at the Rachana Sansad School of Architecture. Darryl D'Monte reports.
27 September 2007 -

Despite the groundswell of mass opinion against Special Economic Zones (SEZs), the government appears hell-bent on proceeding with the controversial schemes. In response to the outcry against land acquisition, the Empowered Group of Ministers, which is overseeing the implementation of these projects, has drafted a new resettlement and rehabilitation policy. As many as 184 SEZs have been approved in principle but have yet to acquire land, while there are another 264 in the queue. Andhra Pradesh has the largest number. Some 3 million sq kms of land will be diverted to these schemes, of which half constitutes farm land.

In all the heat that has been generated over the acquisition of land for these projects, the fact that they are meant primarily to boost exports has somehow been forgotten. At a seminar on 25 August 2007 organised by the Centre for Urban Studies at Rachana Sansad School of Architecture in Mumbai, Dr Ajit Ranade, Chief Economist of the Aditya Birla Group, pointed out that this was indeed their raison d'etre. The seminar was on SEZs and their implications as well as emerging challenges for urban planning. Ranade noted that 54 per cent of the country's GDP now comes from services, while agriculture contributes only 17 per cent. However, the fact remains that rural folk constitute some 70 per cent of the population and this lies at the crux of what many critics believe is a thinly-disguised land grab in the garb of SEZs. 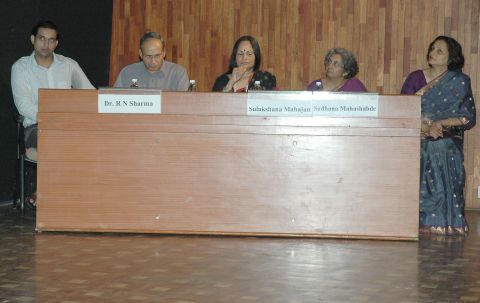 Ranade was the keynote speaker, and Sharvari Gokhale, Principal Secretary in Maharashtra for Environment, School Education and Sports, and who formerly handled the state's Coastal Regulation Zone department was the chief guest. Other speakers included Sulakshana Mahajan, an architect and planner, Dr R N Sharma, Dean of Social Sciences at the Tata Institute of Social Sciences (TISS) and Sadhana Mahashabde, an advocate.

The main attraction of SEZs is the substantial savings on taxes -- particularly excise and sales tax. No less a person that Finance Minister P Chidambaram has gone on record as claiming that they will deprive the exchequer. He has warned that SEZs "distort land, capital and labour costs" and estimates that as a consequence of extending so many tax and other financial concessions --- customs duties, income tax, sales tax, excise duties and service tax -- the exchequer will lose Rs.160,000 crore till 2010. According to the Citizens' Research Collective, a Delhi-based NGO, the annual tax revenue foregone on these pampered so-called export zones is five times the expenditure on the National Rural Employment Guarantee Programme, which some have castigated as hand-outs to the landless poor. That amount alone could feed 55 million people a year.

Maharashtra has gone one step further by demarcating SEZs as industrial townships to function as self-governing, autonomous bodies.

•  Lessons from China
•  Invitation to chaos

Dr R N Sharma, who heads Urban Studies at the Tata Institute of Social Sciences (TISS), cited how the City and Development Corporation of the Maharashtra government acquired land for New Mumbai at a paltry 50 paise per sq ft in the late 1960s. It is now selling for up to Rs.3,000 per sq ft and most of the original inhabitants have been reduced to doing petty jobs somewhere else. Something like 54 villages were acquired, displacing 90,000 villagers.

Sharma deplored the entry of large builders like the Ansal Group of Delhi, Tata Housing and DLF in SEZs, which only reinforced the suspicion that the entire exercise is meant to appropriate land through undemocratic means. "The corporate sector doesn't acquire land directly, but through official agencies," he alleged. Lest the role of builders appears exaggerated, he observed that the Eleventh Five-Year Plan envisaged that one-third of the foreign direct investment into the country would be in real estate. Retired revenue department officials from states were being hired by SEZ promoters for Rs.1.5 lakh a month.

Sashi Ratnakar Singh, a development studies scholar at TISS, detailed how the first SEZ, in a sense, was at the Kandla port in 1965; India was indeed the first Asian country to possess such an exclusively export zone. The experience with SEZs, from his research, was different in different countries. In China, these projects had generated 30 million jobs. In South Korea, the projects facilitated the move from manufacturing to services. 63 per cent of SEZs in India are for IT, which employs only 1.2 million people. In the US, these zones were located in poor ("backward" in Indian parlance) areas, which had been bypassed by industry. While the government had supported these ventures in other countries, in India it was by private capital, which is obviously profit-driven.

According to Singh, in 2004-5, SEZs accounted for only 1 per cent of the factory employment in India and 5 per cent of its exports. Thus, the very rationale for these pampered projects doesn't seem to hold good, at least by the record so far. He noted that the shift from export-processing zones or EPZs, which were industrial enclaves, to townships through SEZs, was a fundamental change. While economists like Jagdish Bhagwati had claimed that India suffered from a plethora of democracy and needed SEZs, others like Amartya Sen has cautioned against them, even while asserting that there is need to shift from agriculture to industry. The crucial question is the land acquisition process.

In China, there was no semblance of social justice: "preferred regions", which were mostly along the southern coast, had promoted the unequal development of the country, but, in the absence of democratic safeguards, there were little or no protests against official policy, unlike in India. While the GDP of Shenzhen, China's pre-eminent SEZ, had gone up by 28.5 per cent, nearly three times more than China's, wages had not registered a proportionate increase, according to Singh.

Sadhana Mahashabde, an advocate based in Mumbai and who teaches urban studies at Rachana Sansad, spelt out the legal issues governing SEZs. She noted that the policy had been introduced in 2000 through a revision of the export-import policy. Further, according to Mahashabde, state governments had passed resolutions which included references to "foreign territory". Maharashtra has gone one step further by demarcating SEZs as industrial townships to function as self-governing, autonomous bodies. In other words, people within SEZs could not elect their own local government bodies. This may be in conflict with the 73rd and 74th amendments of the Constitution, which mandate the devolution of powers to local authorities. According to Mahashabde, the Development Commissioner, a serving bureaucrat in the state government, would play a crucial role. Powers under the Industrial Disputes Act are delegated to this official and units in the SEZs would be declared public utilities under this Act, which forbids strikes and agitations.

Mahashabde referred to several other legal issues which SEZs raise. Their special status itself was discriminatory since they challenged the fundamental right to equity under Article 14 of the Constitution. Nobody was allowed to enter without an identity card, which again violates the right to movement under Article 19. Under the 42nd amendment of the Constitution, environmental protection and improvement were explicitly incorporated as both a right and duty on the state as well as the citizen. SEZs are also not subject to any town planning law, which violates the 75th amendment, ensuring people's participation in local government.

There have been agitations over land acquisition for SEZs in West Bengal, Orissa, UP, Maharashtra and other states. The central government has been forced to concede that agricultural land will not be acquired for this purpose. Till now, state governments have acquired land under the Land Acquisition Act of 1894. This Act is to be used only for a public purpose or for use by a company with prior notification and by paying compensation to the owner. With so many worrying aspects about SEZs, and the idea itself being debated, a clear public purpose does not appear to exist. And as for fair compensation, the right of other stakeholders, such as landless labourers and share croppers, are not recognised. Amita Bhide of TISS also referred to the dubious status of migrants in lands to be acquired for SEZs.

After the fiasco with land acquisition for industrial purposes in West Bengal, the central government on the contrary advocated that developers should deal directly with owners to give them a better deal, without intermediaries. Maharashtra, as usual, has gone one step further and notified land meant for SEZs to be acquired under the state's Industrial Development Act (IDA) of 1961. These areas are then transferred to the developer for industrial use, which is a blatant misuse of official powers. The IDA is a more sweeping piece of legislation, which is being resorted to protect the developer from dealing with farmers and other land-owners.

These criticisms raised at the Mumbai seminar on SEZs are a sufficient indication of the extent to which SEZs have been pushed as a government policy without any public consultation on their pros and cons. While no one can object to areas being industrialised, such land ought to be unfit for farming and the state should not extend excessive concessions, all the more so in an era of economic liberalisation.