Too many times in the last five days, the Anna Hazare-led movement against corruption was labeled 'apolitical', almost as if to call it political would taint it somehow. Subramaniam Vincent analyses the 'victory'.
10 April 2011 -

First, they called it blackmail. Most dictionaries I checked keep to this meaning: "Extortion of money or something else of value from a person by threats to divulge discrediting information." It isn't clear how a hunger strike to demand an anti-corruption agency with power take on the corrupt, suddenly turned out to be moral blackmail. What particularly discrediting information was Anna Hazare proposing to release about the UPA government?

The 2G scam? Sorry, that broke long back. The CWG scam? Sorry, that one broke earlier too. The million NREGA scams? No. Those break each day in some corner or other of this nation. Everyone already knows that most tenders in this country have kickbacks riding along. In a season where the UPA government has already been drenched in one discrediting scam after another, how could Hazare's motley group of crusaders discredit Manmohan Singh and his team any more to even worry them? 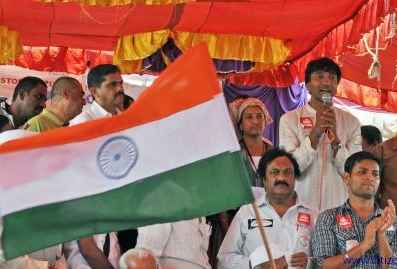 Eight citizens fasted indefinitely in Bangalore during the campaign; they broke their fast on the morning of April 9th after Anna Hazare ended his at New Delhi. On the far right with the microphone is Mahendra Kumar Gandhi, who started his indefinite fast on April 5th. Pic: Meera K.

Hardly. It was one individual's simple and clear-minded choice to take his long battle against corruption to a higher level: place his life on altar of sacrifice in the very manner than the founding fathers of this nation had done, again and again, seven decades ago to free this nation. That was all.

Next they said, law in our country is drafted by parliamentarians, and civil society cannot usurp that power to itself. The Hazare group's demands were cast out as erosion of democracy.

The critics forget too easily that the national movement that liberated India from its rulers ended up seating it's very leaders as the framers of our Constitution - the original foundation for all law. It simply isn't at all unusual the campaigners - respected in their past accomplishments as they already are - to have a say in what will go into the Lok Pal bill. (The one blemish that Hazare could have perhaps avoided is including the father-son duo of eminent lawyers, Shanti Bhushan and Prashant Bhushan, in the committee. It would have been just as well to have only one of them.)

Another criticism is that somehow the movement has legitimised an authoritarian streak that is itself anti-democratic. The movement, the worry is, will now somehow lead to every other campaign in India using the same tactic to get the government to pass a bill. People who feel this are legitimately worried, and I empathise with them. Power is power. It can be abused and it will corrupt.

But they miss the point.

Every genuine people's movement cannot be held hostage by debate over its methods, as long as they are peaceful and constitutional. More importantly they miss the point that it was not Hazare's fast-unto-death that got the government to move. It was an uprising of nationwide support for the stance of a man of stature, track record and integrity as Hazare's that made the government rethink its line.

What the critics also miss is that every "other cause" is simply not going to get this kind of support. In a democratic society, however immature or otherwise, popular values are liberal values. Only a cause as great and undivisive as this could gain this kind of support so quickly.

The activists' draft will create a Lok Pal demon

The last criticism I will take on. Several people have read through the India Against Corruption group's draft of the Lok Pal bill. They are worried that this will unleash upon India a new demon - a new unaccountable, all-powerful Lok Pal - that will stride along like a monster, abusing its power, and only drag the nation down into a deeper abyss.

Such is our fear of power - or its abuse - in this country, that again, the point is missed. This nationwide five-day movement was not as much about a battle over the nuances of a workable Lok Pal Bill. It was also not about getting my version of the Lok Pal bill passed over yours, because my daddy is bigger than your daddy.

An 'educated' citizenry full of resentment and frustrated with corruption was galvanised by Hazare. Their idealism found a voice in him. They found a hero, as unlikely as it may have seemed just a few weeks before the ultimatum Hazare issued to the UPA.

Still, a demon in the making? The parliamentary process for making law is clear. First the 50:50 joint committee will have to develop a consensus on one overarching question: What does 'teeth' to the Lok Pal and LokAyukta really mean in practice? I.e., How can deterrent of corruption be made real to the fullest extent our Constitution will permit? 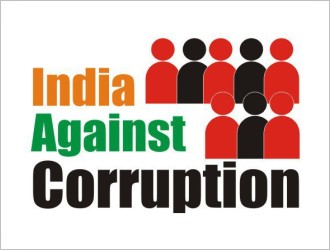 A genuine people's movement cannot be held hostage by debate over its methods, as long as they are peaceful and constitutional.

The consensus bill will have to then pass the union cabinet before the monsoon session begins. Next, it will be discussed in Parliament, where given the history made in the last week, there will very likely be a serious debate. After it will be about the 'teeth' politicians are giving a body to hunt the corrupt amongst themselves down. Fourth, it will likely be sent to a standing committee before being finally brought back to vote.

At any one of these stages bill may 'evolve'. And given the history of law-making in our country, dilution of even the consensus legislation that emerges from the joint committee, is the risk. Hazare and his band of reformers know this - experienced as they are. Which is why the 73-year-old veteran of many battles has already said that the journey has only begun. So to even think that this movement has somehow set the stage for the unleashing of an undemocratic Lok Pal onto the nation, is putting cart before the horse.

It was not Hazare. It was not even all the citizens around the nation who campaigned for his cause. It was politics. This movement has shown the nation what politics could be about as India moves along. The amplification by a somewhat partisan electronic media - true as it may be - does not take away anything from the fact the uprising across so many cities was genuine. And there were both signs and sparks in recent times.

Everyone watching Karnataka knows the outpouring of support that Lokayukta Santosh Hegde received in 2010 when he sent his resignation in frustration at being unable to hold the corrupt and nabbed accountable. The outrage in Bangalore in particular and elsewhere in the nation was tremendous. Moved, he decided to stay on and fight. Ironically, even as he remains a government functionary today, he is on the 'civil society team of five' in the government's joint committee.

For too long this nation has seen politics of only one kind: seat grabbing for elections, black money, liquor, doleouts, vote grabbing, vote catching, vote cashing, land grabbing, coalitions, threats, walkouts, upstaging governments, and what not. Politics for us has never been about the elementary dignities of citizenship: duties and rights.

In fact, we have seen such abysmal politics for so long that many have forgotten what politics itself should be about.

April 9th, 2011 was a victory for Indian politics itself because it has shown that there is a moral fibre left in this nation. It is easy to get cynical in India about all things 'public'. But in a democracy all political authority ultimately flows from the people to its representatives, not the other way around. When an assertive citizenry want that power back to steer the country on a new (and corrected) course, their claim is not easy to deny.

It is also a message to all mainline political parties who have failed India in politics, despite winning election after election in state and country. A warning that an empowered Lok Pal that cuts back on corruption will also end the parties' largest source of illegitimate finances - government contracts and projects. The Lok Pal can become the Comptroller and Auditor General's best friend, as the latter already exposes one department after another in audit after audit, year after year.

Our political parties, sooner or later, will simply need to reform the way they run their affairs. You cannot have a Lok Pal that has the teeth to put people behind bars on the one hand, and elections funded by black money on the other hand. It is either one or the other.

And so it has come to pass that the 'urban', 'educated' and even affluent citizens have finally turned a new page in politics in India. Write off the middle and high-income tax-payers no more. But make no mistake. It is not a new chapter yet. As Hazare and his supporters say, the battle has begun.

Subramaniam Vincent is co-founder and editor at India Together. He is also an editor at Citizen Matters, Bangalore's interactive newsmgsazine. DISCLOSURE: Ashwin Mahesh, also co-founder of India Together is a volunteer for India Against Corruption in Bangalore.