If this isn't hell, what is?

When Neelam Devi and her children stepped into their courtyard, the sight that greeted them was a painful reminder of the Kosi river calamity that had forced them to leave in the first place. Manisha Prakash reports.

Neelam Devi, one of the thousands of survivors displaced by the flooding of the River Kosi in September has returned home. She had seen the worst, having gone hungry for days until she and her family found refuge in a relief camp. Or so she had thought. But the return home proved to be a shock. 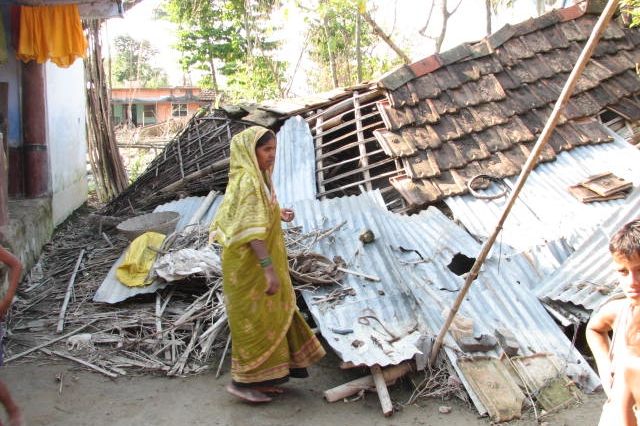 A womam shows her house, which has to be built anew. The house was damaged during the floods. Pic: Manisha Prakash.

A tiny empty house, in village Panchgachiya, district Madhepura, with its damp and crumbling walls, beckoned its owners. When Neelam Devi, her three sons and two daughters stepped into the courtyard, the sight that greeted them was a painful reminder of the calamity that had forced them to leave it in the first place. There were swarms of buzzing mosquitoes over puddles of filthy water, soggy school books strewn across the floors, and algae all over the walls. But it was the foul and unbearable stench from the decaying carcass of a cow that left the exhausted family even more traumatised.

All this was a few weeks ago. The floors and walls have since been cleaned, but the ubiquitous stink still pervades the house, settling in the pit of the stomachs of those forced to live within its walls. Today, the family spends most of its time up on the small roof of their single-floor tenement, hoping that the feeble winter sun will dry out the books, the clumps that were once mattresses and the now-moldy 'khaat' (low poster bed with coir weave in place of a plank). It was the same roof on which they had climbed when the waters of the swelling river had inched higher and higher.

Neelam Devi's roof had, in fact, provided a base for many families, as they huddled together marooned in their village, peering at the surging waters down below. Their only link with dry land was the radio that blared the words of Bihar Chief Minister (CM), Nitish Kumar. "Jaan Hai to Jahan Hai," he had said, urging people to flee their homes and belongings and to evacuate the flooded areas. Neelam Devi and the rest had then climbed down into the rescue boat that had sailed into her courtyard.

The CM's public address over the radio may have saved many lives, but the poor villagers now wonder when - and whether at all - he will address the issue of recovery in these flood-ravaged areas, now that the receding waters have left behind a nightmare of disease and poverty. For thousands of villagers in remote corners, the horror threatens to persist.

As for Neelam Devi, with hardly any money, resources or even the prospects of a livelihood, she is trying desperately to piece together her life. To add to her woes is a daughter who is reluctant to answer nature's call even at the cost of her health. Pinki Kumari, a Class Eight student, declines to go into the open fields, any more. The slush and animal carcasses that the Kosi has left behind makes her demand a toilet within her home.

Basic sanitation for the survivors, a human right, now seems mere words carried in one of the soggy textbooks drying on the roof. "The floods have broken us. We can't think of spending on keeping our homes clean. We have to manage with whatever little we have. My husband earns barely enough for food," Neelam sighs, as she looks at her daughter.

Some children in Panchgachiya village of Murliganj block try to wring dry their yellow-brown jute school bags in the innocent presumption that school may soon reopen. But the signs of normalcy - a bustling local bazaar, cheerful children charging out of school, newly washed clothes fluttering on a washing line - continue to elude these villages. Even the simple pleasure of washing with soap is an unimaginable luxury, when there isn't enough for lifesaving medicines or even a daily meal. The unhygienic mud easily available in the backyard is the only cleanser for the body, the kitchen utensils, and clothes. "How can we talk of soap? We don't even get clean water... the water is unsafe even for drinking," says an extremely impoverished Shalo Devi.

Living off the meagre earnings that her migrant labour sons sent back from Delhi and Punjab, Shalo Devi took care of her mentally-challenged husband, Kishor Shah. When the Kosi flooded, Shalo sold her cow at a throwaway price and dragged her husband to safety. Having returned to their now-stinking home, Shalo now suffers from profuse and erratic uterine bleeding. How does she manage in unhygienic conditions and without clean water? She replies, "I somehow manage with torn saris, whenever I bleed."

There is misery all around but the absence of sanitation and clean water adds to the physical woes of women, who have to walk miles to fetch water or to answer nature's call in some privacy, sidestepping the carcasses, snakes and flies in the process. But if nature's fury and administrative apathy were not enough, caste squabbles over relief material make things almost impossible.

The 2,500-strong Panchgachiya village houses various communities - Dalits, Thakurs, Muslims and OBCs. Today each community fights the other over the sharing of the relief material being distributed by the government. And, as is usually the case, those that are better connected politically get to keep the lion's share of such relief. (Women's Feature Service)