A recent study on the Kosi deluge asserts that embankments are the root cause of the present crises. Only a longterm micro-level study of why the river course is changing along with firm policy decisions can remedy the situation, says Sudhirendar Sharma.
17 September 2008 -

Dinesh Mishra has narrated stories about breaches on Kosi embankments since 1963 and the ritualistic manner in which the state has handled (or not handled) the situation (see here). Without doubt, it is neglect on the part of the hydrocracy that has kept millions under threat of floods, year after year and decade after decade. It is a blessing in disguise that the 18 August 2008 breach has brought the issue to mainstream discourse.

The worst is still to come

River embankments have been used world over as temporary flood control measure, and Bihar has been no different. But no river embankment has yet been built or can be built in future that will not breach. The report from a fact finding mission that I led, Kosi Deluge: The Worst is Still to Come, asserts that embankments on the Kosi are the root cause of the present crises. It seeks firm policy decisions to remedy the situation. Though considered unlawful, trapped communities have time and again engaged in creating artificial breaches for draining accumulated water from their surroundings.

Conservative estimates indicate that the current breach at Kusaha (in Nepal) may not be fully plugged before March 2009, the unwritten assumption being that till then the river will flow at or below the current level of discharge. This assumption may be seriously flawed as Kosi gets its peak flow towards the closing stages of the rainy season; the maximum ever discharge in Kosi has been a whopping 913,000 cusecs on October 5, 1968. So, things could get worse. Since floods are known to follow a pattern, one wishes that the river does not embarrass the engineers fraternity any further.

The team was aghast to observe that neither central nor Bihar government conducts any survey to assess the effect of flood control measures on socio-economic condition of the society. The same holds true for Nepal as well.

It (embankment) jackets the river with the engineering assumption that a reduced cross section of the river will indeed increase its velocity and the power to dredge its base. Neither has happened in the case of the Kosi

In our report, we argue that while flood control measures like dams, embankments and their repairs can provide temporary respite. It is a phenomenon that needs longterm careful micro-level study of the factors causing shift in the course of the river.

There has to be an acknowledgement that even if one fills the breach in the embankment the problem does not get solved forever. Even when one chooses to ignore changing morphology, i.e., the change in shape and structure of land on account of barrage and embankments, the estimated lifespan of a dam (proposed in Nepal since 1937) and embankment are 25 years and 37 years respectively. This underlines the transitory nature of techno-centric interventions.

Note also that there is a precedence of embankment demolition in India. The embankments built along a length of 32 kilometres on river Damodar in 1854 were demolished in the year 1869. The British had soon realised that far from controlling floods, the embankments were submerging fertile lands for which the colonial rulers were forced to provide compensation. The first ever compensation of Rs. 60,000 on account of submergence due to embankment failure was given to a farmer in 1896 in then Bardwan district.

What are the options for Bihar?

That the embankments have been temporary solution to the scourge of floods and that these have outlived their age three times over raises serious question on strengthening them to plug the breach in the present scheme of things. It creates a set of discomforting scenarios and compelling questions: one, will reinforcing a breached portion of the over-aged dilapidated embankment not leave the remaining stretch of the embankment vulnerable, even at the present level of discharge? But if band-aid is not applied the human misery may continue for long.

Two, given the present timeline the breach is unlikely to be plugged before March 2009, by which time a sizeable population would have (hopefully) moved to alternate locations. Should then the river not be allowed to follow its new course? Three, as the existing embankments were neither designed as permanent solutions nor have these proved to be so, how far investment in maintaining them can be justified even if it means providing temporary relief in such calamity?

Given the fact that the Kosi has been embanked for at least 135 km downstream from the site of the breach at Kusaha, the flow having once left the embanked river could at no point have rejoined that course. Consequently, the river was compelled to go into three of its previous channels: Sursar, Mitchaiya and Belhi. In all, the meandering river has 15 different channels (options) through which it flows or has flown. The 380 villages trapped inside the embanked river have heaved a sigh of relief because the river is not flowing through its erstwhile course. 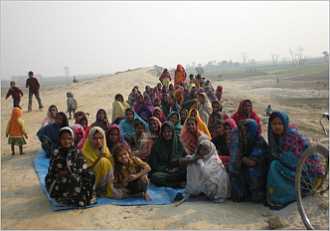 Flood control on Bihar's rivers has never been easy. This is the venue of protest in Muzaffarpur, early this year, against embankments on another river, the Bagmati. Pic: Barh Mukti Abhiyan.

Locating a river as a blue streak on the map and feeling its currents while traversing through it make a world of difference. Our fact finding mission had an opportunity to undertake a boat ride along then main course of the Kosi, called Tilyuga which till 1948 was an independent river, to get a feel of the living waters of the river during March 2008. Moving against the current, it was observed that through its gentle meander the river was engaged in the act of enriching the land by depositing rich silt. However, it was slowly but steadily corroding its embankment to liberate itself from its jacket.

Embankments have always been a double-edged sword. They jacket the river with the engineering assumption that a reduced cross-section of the river will indeed increase its velocity and the power to dredge its base. Neither has happened in the case of the Kosi as its massive cross section, varying in length from nine to 16 km at different locations along its length, has become a silt-dumping ground. Nothing could have been more shocking for the members of the mission than to observe from atop the embankment that the river-bed was several feet higher than the adjoining land. The high lands and low lands have been separated by the ubiquitous embankment, turning the low lying area permanently water-logged as the natural drainage from the area gets choked.

Now that the river has taken its course and that there is no way it could be brought back to its so-called original course over next eight to nine months, the best option for the state would be to initiate work on the root cause of the problem, i.e., of dismantling embankments. As the affected majority is moving to safer places and the river has already bypassed the existing embankments, there doesnt seem any rationale in investing further on these structures that have failed several times over the past five decades.

Also, though considered unlawful, trapped communities have time and again engaged in creating artificial breaches for draining accumulated water from their surroundings. The general perception favours removal of embankments provided the act of demolishing does not create undesired conditions.

Like the Dutch hydrocracy that has started working on the room for the river concept following failure to tame rivers Rhine and Meuse. The Delhi and Patna think tanks can emulate spatial flood protection measures as an alternative to jacketing of the river. (Spatial protection means creating space for the river to spread thereby reducing the impact of floods.)

The new approach not only warrants informed public debate but is based on broad political support. It is measures like these that need to be discussed and negotiated with communities in north Bihar, but not before the political stables in Patna (and in Delhi) get cleansed of their misconceptions!

Given its distinct geo-morphological (geo-morphology means the natural shape and structure of land) features and complicated hydrological characters, the Kosi is one of the Himalayan rivers that has yet to be understood in its entirety. It is high time policy makers gave up their outdated conquest over nature paradigm and acknowledge we shall have to learn to live with floods.

Sudhirendar Sharma is a water expert and Director of the Delhi-based Ecological Foundation. The fact-finding mission was an Ashoka Fellowship Initiative (www.ashoka.org) aimed at getting an in-depth assessment of the perpetual flood cycle in north Bihar.

BACK TO SCHOOL : Meaningful restart of education is critical
MORE ARTICLES
on similar topics ...
BIHAR