A red dawn that set too soon

50 years from the scene of action, it can be safely said that the 28-month long EM Sankaran Namboodiripad government of April 1957 laid the foundation stones of present day Kerala. Whether the merits of the maiden government's reform attempts were consolidated in the following five decades is another story altogether, writes P N Venugopal.
20 April 2007 -

This month, Kerala is celebrating the 50th anniversary of its first government. This government also happened to be the first Communist government in the world to come to power through ballots. 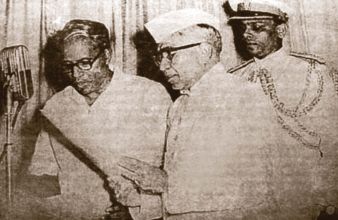 The erstwhile princely states of Travancore, Kochi and Malabar (which was a part of the Madras state) became the state of Kerala in 1956 and the first election to the state assembly was held in 1957. The Communist Party of India (CPI) won 60 seats out of 126 and formed a government with the support of five independents who had contested the election with the support of the CPI. An 11-member cabinet, headed by EM Sankaran Namboodiripad (popularly known as EMS) was sworn in on 5 April by governor Ramakrishna Rao. The jubilation across the state was unprecedented and spontaneous. People with a left orientation across the country celebrated the swearing-in as 'Kerala Day'. But there were also ominous signs of things to come. After the election results were declared and before the new ministry took charge, the governor nominated an Anglo Indian member to the assembly without waiting for the cabinet's recommendation. Governor Rao also went to the extent of raising the emoluments of the top bureaucrats. These were not 'done things' in the usual course. The cabinet for its part, reduced the salary of the ministers from Rs.750 to Rs.500.

Most of the ministers were stalwarts in their own rights. The chief minister, EMS, the Marxist theoretician was already a well known author, was in the forefront of the freedom struggle and was the general secretary of the Kerala Pradesh Congress Committee before he moved on to the Congress Socialist Party and then to the Communist Party. There were educationists like Joseph Mundassery, Dr A R Menon and V R Krishna Iyer. Krishna Iyer who later on gave up politics and became a Supreme Court judge. Most of the ministers and legislators were 'wanted' by the police and were 'underground' till the withdrawal of the ban on the Communist Party.

The inaugural April 1957 Kerala government was the first communist government in the world to come to power by the ballot.

Twenty-eight months later, the Government of India invoked Article 356 of the Constitution to dismiss the same government. This was the first time Article 356 was used in the history of India.

The government plunged into action from the word go. On 11 April, an ordinance was promulgated stopping eviction of tenant farmers. The government put forth an agenda based on what the Communist Party saw as the steps necessary for the democratic revolution. The Agrarian Relations Bill was one of the most important legislations introduced in this direction. It called for fixity of tenure for the tenants, reduction in the rent, ensuring the right of tenants and making cultivators the owners of the land by paying compensation to the landlords. The bill also set 15 acres of double cropland as the ceiling of land ownership. Even the Communist Party did not claim that it was a revolutionary piece of legislation. Most of it was what the Congress Party had promised the peasantry during the independence movement and it was basic agrarian reform. But it evoked strong opposition from the land owning class. (The bill itself had a tortuous fate and even though passed in the assembly in 1959, the land reforms in its full form had to wait till the second EMS led government in 1967).

Opposition from various quarters was to follow the ministry through out its tenure. It was the era of the Cold War and the world was polarising into communist and anti-communist blocks. India was a fledgling democracy fumbling and often stumbling in coming to terms with the intricacies of democratic and federal governance. The Kerala government itself was not in an envious situation. It had no role model to follow. All the communist governments in the world till then had come into power as a result of revolutions and there was total overhauling of the existing system. But here was a communist party in power in a federal setup which was 'capitalist' in character and had to largely abide by the economic policies of the central government and wholly abide by the constitution of the country. It is interesting to note that many other communist parties in the world called the Kerala experiment 'revisionist' as power had not come through an armed struggle.

However, the first government proved by its record that it is possible for a state government to implement measures to improve the living conditions of the marginalised, at least to a certain extent. As many as 88 bills were enacted in the ministry's shortened tenure of 28 months. The Minimum Wages Act for the workers in 18 industries and for agricultural workers ensured substantial increase in the wages. The Maternity Benefit Act gave women workers of the plantation and other similar sectors much wanted security. The Agriculturist's Debt Relief Act provided relief to the peasantry and the National and Festivals Holidays Act provided for seven paid holidays. Until then, workers did not have any holidays.

Several other bills were introduced in the legislature but could not be adopted due to its premature cessation. Of far reaching import were the Panchayat Bill and the District Council Bill envisaging the decentralisation of powers. Several administrative reforms measures were taken up and police was told not to interfere in labour disputes at the same time ensuring security of life and property. Third party arbitration was introduced to solve labour disputes. A police reforms committee was set up under the chairmanship of N C Chatterji, father of the present Loksabha Speaker Somnath Chatterji. Setting up of juvenile homes, rescue shelters, appointment of policewomen, and so forth, were some of the recommendations of the committee. Only a few could be implemented as the ministry was shown the door by that time. A master plan for preservation of water sources was prepared and there was general commendation as it was the first of its kind in India. ("It's still gathering dust", said Justice Krishna Iyer, the then irrigation minister, in a recent interview).

One of the most important pieces of legislation that the communist government brought in and which also proved to be the immediate cause of its ouster was the Kerala Education Act. The Act was to institute universal free education and also free teachers from the clutches of private school managements. It sought to regulate appointments and working conditions of teachers. There was also a provision of takeover of those institutions which violated the law. This particular provision was made out into a big issue by the Christian managements. They were joined by the Nair Service Society (NSS), an organisation of Nairs, a dominant caste. Other communal forces too joined in and the Congress Party spearheaded the 'free for all' agitation, which very soon turned violent. The agitation was named the vimochana samaram (liberation struggle). The police, which was under tight reins, did not react initially and when they started reacting, apparently over-reached themselves. There were several police firings and several fatal casualties. There were allegations that the alliance of the rich and the powerful, the communal forces and interested foreign agencies had manipulated the gullible to stage-manage a show of mass agitation.

The involvement of the Central Intelligence Agency (CIA) in the struggle was first confirmed by Patrick Moynihan, United States' ambassador to India (1973-75) in his 1978 book A Dangerous Place. It was corroborated by Howard Schaffer the biographer of Ellsworth Bunker who was the US ambassador during the crucial years of 1956-61. Bunker is quoted confirming the American and his own involvement in funding the agitation against the EMS' communist government, in order to prevent "additional Keralas". (See Box)

The long and short is that the Kerala government led by EMS was dismissed on 31 July 1959, by the Government of India, citing "breakdown of law and order", based on the report by Governor Rao. It was widely reported that the action was at the behest of Indira Gandhi, who was the president of the Congress Party and against the wishes of Jawaharlal Nehru, who was the prime minister. The EMS government still had simple majority in the state assembly. It was for the first time that Article 356 of the Constitution was being invoked to dismiss a state government.

With the advantage of perching 50 years from the scene of action, it can be safely said that the 28 month government led by EMS laid the foundation stones of present day Kerala. It had given to the country and the world some important lessons in social and political engineering. Whether there has been a consolidation of the merits of the social, agrarian and administrative reforms in the following five decades is a big question and another story altogether. (Quest Features & Footage)

P N Venugopal is an independent journalist based in Kochi.

BACK TO SCHOOL : Meaningful restart of education is critical
MORE ARTICLES
on similar topics ...
GOVERNMENT