In Kashmir, it seems the only person the Centre is listening to is Omar Abdullah, the man against whom the entire population, including his own party, his bureaucracy, and his police is up in arms, writes Madhu Purnima Kishwar.
23 August 2010 -

What the ISI-trained terrorists and their agents in Kashmir could not achieve in 20 years, Omar Abdullah and his patrons in Delhi Durbar have managed to deliver to separatists in less than 18 months. Farooq Abdullah is well within his right as the father of the present Chief Minister of J&K to advise his son not to resign despite the worsening situation in Kashmir. But by telling Omar to keep clinging to his chair even when he has earned universal wrath in Kashmir all because he has still not yet lost favour with the Congress Party High Command is to openly declare that he owes his position to the Delhi Durbar.

This when one of the key complaints of Kashmiris is that the Central Government has a habit of planting chief ministers in Kashmir who will let the Centre rule J&K by proxy even if it means depriving Kashmiris of the democratic rights available to people in most other parts of India to elect or cast away their those who fail them as their political representatives.

Similarly, the Prime Minister's condescending offer of "dialogue" with all those who are willing to "shun violence" only adds insult to injury. Firstly, the PM is not doing anybody a favour by offering dialogue.

At the moment those who are pelting stones defying curfews and shoot-at-sight orders are in no mood of dialogue. The moderates among Hurriyat who had earlier risked their lives by coming for dialogues to New Delhi were abandoned mid-way because of the Congress leadership's smugness on account of high turnout in the elections. The pro-Pakistan hardliners have spurned the PM's offer for talks because this regime's policies have brought them centre-stage. In fact, they have used the popular upsurge against the continuing violation of human rights to lay their own pre-conditions for dialogue demanding the repeal of Armed Forces Special Powers Act and withdrawal of security forces from the Valley.

Had the Centre demilitarised Kashmir in good time, it would have earned universal goodwill in Kashmir. But today, the Congress High command has caused severe erosion of its moral and political authority and the vaccum created by the marginalisation of democratic processes has been filled by the sepratists.

It seems the only person who the Centre is listening to is the man against whom the entire population - including his own party, his bureaucracy, and his police are up in arms. Today, the situation is far worse than in the 1990s. At that time people feared death at the hands of militants. Therefore, they did not dare defy their diktats. But today, the stone pelting young kids are so enraged at the current regime, both in Srinagar and in Delhi that they have turned nihilistic and are afraid of no one - neither the guns of terrorists nor that of security forces. Many among the state policemen have procured fake identity cards and avoid wearing their uniform when commuting from their homes for duty lest they be lynched by angry mobs. 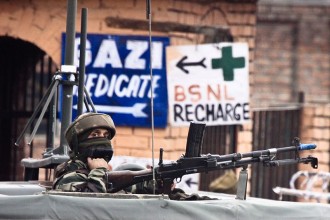 The only people not attacking Omar Abdullah are pro-Pakistani elements who are delighted that he has provided them such a fertile ground for their secessionist agenda at a time when even Pakistan had lost hope of making it work. (Above: A soldier stands guard outside Srinagar airport. Picture source - Wikipedia Commons).

•  The trouble with Eden
•  Democracy, the best antidote

The curious love-hate relationship between the National Conference and the Congress Party at the Centre has resulted in consistent mishandling of the Kashmir situation from 1947 onwards, when the NC assumed power after Sheikh Abdullah made a pact with the Congress Party at the Centre. Despite being a much loved and popular leader, Sheikh Abdullah was an out and out autocrat. Even when it was 100 per cent certain that he would sweep the poles, the Abdullah patriarch organised brazen rigging of elections and hounded all opponents out of the electoral fray.

The romance of Kashmiri Muslims with the Lion of Kashmir would have died in no time if it were not for the blunder Nehru committed by putting Abdullah in jail and later under house arrest for 11 long years. That put a veil of martyrdom over his autocratic rule. He was reinstalled as arbitrarily as he was dismissed. This earned the Congress Party and the Central government the image of a despised imperial power.

His son Farooq carried forward the family tradition of rigging elections with open connivance of the Central Government if he showed willingness to be a pliable instrument. His regime was also notorious for corruption and mismanagement. At the end of his tenure Farooq was so unpopular that people actually dug up the grave of Sheikh Abdullah to vent their anger against the dismal governance record of the National Conference. But instead of letting him face the ire of his own people in the electoral arena, Farooq too was provided the halo of martyrdom by New Delhi's repeated imposition of Governor's rule after arbitrary dismissals of the NC government, and the equally arbitrary reinstatement of Farooq as CM after he signed the Rajeev-Farooq Accord in 1986. It convinced Kashmiris that New Delhi will only allow puppet chief ministers in J&K.

The brazen rigging of the 1987 elections by NC with the active connivance of the Congress Party at the Centre - with a view to deny the Muslim United Front the opportunity to wrest a dozen odd seats in the legislative assembly - led to a massive upsurge against Farooq's government and inevitable alienation from Indian democracy. This is what prepared a ripe ground for Pakistan to foment trouble and inject terrorist politics into the Valley.

Initially, Omar Abdullah gave the impression that he had learned from his father's mistakes. However, he also saddled himself with many liabilities when he assumed power after the 2008 elections. Today, even senior bureaucrats, police and Army officers admit that the National Conference won the 2008 elections by selctive rigging and 'management of polling booths', especially in Srinagar city from where National Conference won 8 seats. The capital city witnessed the most blatant booth-capturing and consequently the lowest voter turnout in the Valley of about 2 to 6 per cent - this at a time when the average voter turnout in the Valley was 60 to 69 per cent. This cast a shadow on the legitimacy of the NC government as well as on the credibility of the elections.

To top it all, Omar took over as CM after staging a brazen coup against his own father, by using Rahul Gandhi's clout to claim the throne. This after his father had let the whole world know that he was going to be CM. Proximity to Rahul Gandhi may give Omar political clout in Delhi Durbar and a lot of favourable media coverage in the national press, but in Kashmir it stigmatised him as a puppet of the Congress High Command. It does not help matters that Omar is seen more often in Delhi than in Srinagar.

Lacking a popular base in the Valley, the new Chief Minister handpicked a few cronies, including some of his unsavoury business partners who lord over a very corrupt and callous administration. Omar also estranged the entire old guard of the NC by his arrogant systematic sidelining of all senior leaders, especially those who had some political roots in the Valley. Not surprisingly, NC stalwarts have been completely inactive during this crisis and NC cadres are playing a leading role among stone pelters. The current joke is that when addressing the media, Omar's main audience is 10 Janpath, the Home Ministry and the South Delhi cocktail circuit - the three forces he imagines are the shakers and makers of India.

It took 20 years for Kashmir to recover from the backlash against the Rajiv-Farooq accord. However, at that time only a handful picked up the gun. The Omar-Rahul accord has proved far more deadly. The revolt against this regime so universal that no one, not even NC stalwarts, dare stand up in public to defend it in Kashmir. As far as Kashmir is concerned, starting from Nehru, the Congress Party has perfected the art of wresting defeat from the jaws of victory.

Public disapproval of state governments is not uncommon - we regularly witness state governments being voted out by people fed up with their rulers. However, it is only in Kashmir that we find the upsurge against the local regime turning into an anti-India upsurge because of New Delhi's penchant for propping up pliable CMs and endorsing their use of central security forces to deal even with democratic protests.

Madhu Purnima Kishwar is the founder of Manushi

BACK TO SCHOOL : Meaningful restart of education is critical
MORE ARTICLES
on similar topics ...
J & K