The story of a heroic soldier captured by the enemy and tortured to death stirred strong emotions during the Kargil war. Why, then, is there a lid of secrecy around his death, wonders Firdaus Ahmed.
30 November 2012 -

The father of Saurabh Kalia, a Kargil martyr, has moved the Supreme Court asking for its directions to the government to take up a case of war crimes by the Pakistani army during the Kargil War. Kalia was leading a patrol to ascertain reports on Pakistani occupation of Kargil heights when it is alleged he was captured by Pakistanis who had infiltrated and occupied Indian winter vacated posts on 14 May 1999. The charge is that Pakistani troops then subjected him to torture that killed him. His brutalised body was returned to India on 9 June, along with those of five of his comrades.

If Kalia was captured, tortured and killed in custody and then his body mutilated, the case is certainly a war crime, in this case a grave breach of the third Geneva Convention on treatment of Prisoners of War. This is a case of universal jurisdiction and those who perpetrate such acts are liable for prosecution in any national court the world over.

The International Criminal Court at The Hague can undertake such trials but since the war took place prior to its formation, and neither India nor Pakistan is a signatory to the Rome Statute, cannot take up this case. Nor can the International Court of Justice; its jurisdiction is limited to cases brought before it if both parties agree to it. The ICJ remit is on contentious cases over which there is disagreement over issues of law or fact, a conflict or a clash over legal views and interest; not in criminal cases.

Therefore, with the ICC and ICJ ruled out, there is only the 'universal jurisdiction' clause of the Convention. The problem would in this case be of ascertaining the facts. India's case is that this is a straight-forward war crime. This can easily be established in case the autopsy report is made available. However, India has kept this confidential. It is not certain if India has shared the report with Pakistan either.

About a decade ago, N K Kalia, late Second Lieutenant Kalia's father, had pleaded in a letter to the editor in the Times of India that the outcome should be made available to him so that he would know the truth. Apparently, he too was not in the loop then. Since then, the passing of the buck has been such between ministries as to force him to move the Supreme Court, it is clear that he is still not privy to the post-mortem report. The allegations therefore are not proven. 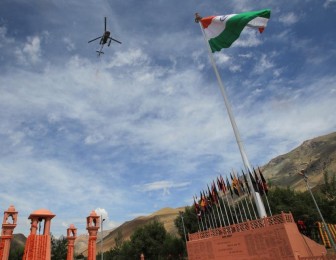 It begs imagination as to why Pakistan would return the bodies in case they bear marks of evidence of torture and mutilation. (Pic: The tricolour files at the Kargil War Memorial in Dras.)

In a press release during the early phase of the war in June, the government had indicated that the Pakistani Deputy High Commissioner had been called to the ministry and asked to act against the grave breaches of the Geneva Conventions; specifically, these included 'the torture, inhuman treatment, and willful killing of (those) who were captured while patrolling on the Indian side of the LoC on 14 May, 1999 and whose bodies were handed over by the Pakistan Army authorities on 9 June, 1999.'

Kalia's patrol - which had been sent up to ascertain reports of Pakistani forces being sighted in Indian defence posts vacated over the winter would certainly have been at least a section strength. Since only six men were reported captured and killed, the fact of their capture must have been made known to Indian authorities once the remainder of the patrol returned to base. Also, since Kalia had only recently been commissioned, the patrol would most certainly have had a Junior Commissioned Officer, familiar with the terrain and defence layout, as his deputy. The debriefing report of this official and the patrol report would establish whether Kalia was captured.

Indeed it is not certain from India's remonstration with the Pakistan then that India was aware of the details of the case. The press release goes on to state: 'It is further requested that a full account of the date, place and circumstance of capture, period of detention and particulars concerning the wounds and cause of death are communicated to the Government of India immediately.' It is clear that the patrol report had little to say on circumstance of capture, for if this was so India did not have to ask Pakistan to clarify the circumstance.

It is possible that the patrol separated under the impact of the ambush, and those who made it back had little clue as to what happened to those who did not. This is not surprising, given that the patrol was perhaps not duly prepared for such an encounter - as the dimensions of the Kargil intrusion were very vague at the time. This uncertainty is clear in the diplomatic note. To infer that they were captured, tortured and killed is therefore to stretch a possibility. India should have pressed for an investigation, and made its case stronger by sharing with Pakistan the reason for its stand: the autopsy report.

The circumstantial evidence does not help India's case. It begs imagination as to why Pakistan would return the bodies in case they bear marks of evidence of torture and mutilation. They would not have admitted to having them in first place. That they did so indicates that any disfigurement could be attributable to the effects of cold from exposure for the duration of two to three weeks at high altitude, type of wounds suffered in the firefight and even wild animals as they lay there unattended. This is possible in case the bodies were out in the open where they came under fire. This permits the alternative possibility that the patrol was not captured as the Indian case makes out.

Further, it is now well-known that the Pakistani troops in occupation of the heights were of the paramilitary, Gilgit Scouts, largely locals from Northern Areas. They are of the Shia community and not known to be fundamentalist or anti-India. Earlier reports of Kashmiri 'mujahedeen', as projected by Pakistan for plausible deniability, in league with extremist allies in Pakistan as being the forces on the heights were soon proven false. It can be surmised that only extremists filled with hatred may have had any reason to torture the officer and his patrol members. Since such elements did not form part of the troops participating in the war, the motive is difficult to substantiate.

Lastly, the lack of clarity in India's case suggests the reason why it has been less than full throated in its pursuit. Indeed, the allegations could well have been part of whipping up national feelings in the build up phase of the war in early June 1999. It helped firm up national support for India's reaction in the form of a localized border war. As a counter factual, the case could have been taken further in the event there was a need to expand the war.

Nevertheless, Pakistan is bound by the Geneva Convention to investigate the allegations. The role of its army can be established if there are reports of capture of Indian troops by their troops in their daily situation reports. In case such situation reports are accessed by an inquiry then Pakistan would be hard put to explain the deaths of the officer and the soldiers in their custody as demanded by India.

While India's taking up of the case with Pakistan is in public knowledge, Pakistan's reply is not known. Pakistan would do well to clarify, for in doing so it could put the ball back in India's court, compelling India to review its allegations. However, the levels of trust between the two states being such, neither Indian allegations nor Pakistani clarifications are likely to be credible to the other side.

Truth is said to be the first casualty in war. Propaganda of yore, and lately, information warfare, have ensured this. The cliche stands proven by the nature of the first casualty of the Kargil War, Second Lieutenant Kalia. Hopefully, the case will ensure that next time around, international humanitarian law is respected better. The unfortunate part is that the nationalist hysteria unleashed by Kalia's return to the headlines suggests that there is no guarantee against another such chance.