In Attapady block of Kerala's Palakkad district, illicit liquor is taking a heavy toll among the adviasis. Addiction to the brew has led to many deaths and suicides, even as a complacent and complicit administration looks on. M Suchitra reports.
14 September 2007 -

I first met Tulasi three years ago. I was on a visit to Palakayooru, a tiny settlement of the Irula tribe at Attappady Block, the remote adivasi region in the Western Ghats in Kerala's Palakkad district bordering Tamilnadu. An undernourished, dark, 20-year-old mother of three, Tulasi told me about the gruesome murder of her husband Vellinkiri. A group of illicit liquor brewers in the nearby forest had poured spirit over his body and set him on fire, lest he should tip the police off to their activities. He was unconscious and had severe burns all over his body when some tribesmen found him and took him to hospital. Vellinkiri was just 22 when he died.

As Tulasi told her story, her eyes had never welled up. I still remember her vacant look and the dry, monotonous voice. She had shown me two photographs of her husband, which she had kept in a small bamboo box. The first was of the unconscious Vellinkiri in a Coimbatore hospital, and the second, of his still body. The police had registered a case, she told me. She had hoped the pictures could be used as evidence of her husband's murder.

On a recent visit to this backward area, I hoped to see Tulasi once again and to find out if her husband's killers had been nabbed. Vellinkiri's murder had kicked up a hue and cry in Attappady. But Tulasi had died several months ago. She had left Attappady for her native village in Tamilnadu a few months after Vellinkiri's death, the tribespeople in Palakayooru told me. Nobody knew what had really happened to her. The police had dropped the murder case much before her death.

But while Tulasi has disappeared, the great tragedy of this region - continuing deaths and suicides brought on by consumption and sale of vattuchaaraayam, illicit liquor - is very much alive. In Palakayooru alone, which is home to just 30 families, there have been 20 illicit liquor-related deaths in the last 10 years - a half of them suicides. Nanjan, Maruthan, Rangan, Talan, 14-year-old Shelvan, Murukesh, and the 40-year-old woman, Maruthi, who had become addicted to chaarraayam and who set herself on fire. Unable to cope with their traumas, many women such as Reshi, Renki and Kaliyamma, became mental wrecks. The despair is everywhere.

So much so, in fact, that people are now reluctant to talk about vattuchaaraayam. "How many times and to how many people could we tell the same tales of woes?" a gray-haired man asks me.

A strong lobby of outsiders, supported by the local contractor-turned-politicians, makes a fortune out of illicit liquor, peddling the spurious drink to the indigent tribes.

Even Velamma, who was outspoken the last time, is tight-lipped. She is the ooru thalaivi (hamlet leader) of Thaikulasangham, groups formed by adivasi women to fight against liquor. An illiterate, she had directed a street play Kudikaran (drunkard) and had inspired other women to stage the play in various hamlets. Now when I ask her whether there has been any change, she turns her face away. Then, after a while, slowly and hesitantly, she informs me that two young actors of the play died a few months ago, after becoming addicted to chaaraayam.

More than the apathy of the police and the excise officials and the threats and attacks from the chaaraayam lobby, what worries the tribal women who fight against liquor is the resistance from their own community. "We have suffered much at the hands of chaaraayam brewers. We don't mind that," says Bhagavathi of Karuvara, an Irula settlement. "But if our own people isolate us, no adivasi can face it." As a consequence, Thaikulasangham has become dysfunctional in most of the hamlets.

They don't know to whom should they now turn for help. They had petitioned the State Women's Commission as well as the Assembly Committee that inquires into the welfare of the Scheduled Tribes and Scheduled Castes. They had also travelled for three hours by bus to Palakkad to meet the district authorities, and to Thiruvananthapuram to meet both K V Thomas, the former Excise Minister (Congress) and P K Gurudasan, the present Excise Minister (CPI-M). But all in vain.

Palakayooru is not an isolated case. A majority of the 187 hamlets of the Irula, Muduga and the Kurumba tribes in Attappadi - where total liquor prohibition has been in force since 1995 - are under the grip of illicit liquor. A strong lobby of outsiders, supported by the local contractor-turned-politicians, makes a fortune out of illicit liquor, peddling the spurious drink to these indigent tribes. Many hamlets serve as centers for storage and sale of the liquor.

Many concerned people feel that the prohibition policy has led to the spread of illicit liquor. Earlier, there were only a handful of people in each hamlet who were addicted to chaaraayam, and they used to go to faraway shops. But all those shops folded when prohibition arrived. With everything going underground, now liquor is available in and around the hamlets themselves, even those who once hated alcohol have got addicted to it.

The prohibition order has not been reviewed after it was first imposed 12 years ago. For effective implementation of prohibition, two high-power committees - one at the state level and the other at the district level - were formed in 2004. This first committee has met only once in the last three years, and the other, despite meeting many times, has yet to come up with significant decisions. Also, the excise office and the police stations are inadequately equipped to implement prohibition effectively, in a difficult terrain with hills and forests that spreads over 745 sq. kms.

The government authorities are also themselves complicit in the illegal business, and the tribes know that the brewers enjoy the support and protection of public officials. The residents are also weary of the government's rhetoric - talking about prohibition and preventing alocohol-related problems, but quietly working hand-in-glove with liquor brewers and peddlers. "To catch a thief will you employ another thief?" asks Bhagavathi, when I ask if the government can do something to stop the brewers. 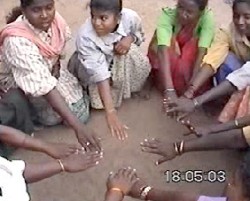 They have many more questions: "Why don't the authorities implement the prohibition effectively? Why were we forced to form Thaikulasangham and conduct excise raids? How do the chaaraayam makers get back the things we seize from them and hand over to the excise officials, the very next day? Why don't the excise inspectors nab the brewers even when we point them out? Why are cases charged under weak provisions? How do they manage to get bail so easily while our people suffer in jail?

The tribes in Attappadi have been reduced to a minority in the last four decades; according to the 2001 census they constitute only 41 percent of the population of the region. The settlers, middlemen, contractors, politicians, and government officials have all been uniformly bad for tribal welfare. A number of development projects instituted in the name of tribal welfare in this most backward block in the state have all failed to benefit them.

As I take a stroll around the site where a new bridge is being built across the River Bhavani near Chavadiyooru, another Irula settlement, I spot wage-labourers who take a break from their work in the searing midday sun and climb a hill where chaaraayam vendors wait for them. Up there, the tribal women tell me, the vendors take out hidden plastic bottles from behind a rock or a bush and pour the illicit brew into small steel tumblers for Rs. 10 each. Hunched on the rocks, the workers drink the liquid-fire in one go, and head back down to return to work. Now I understand why Nanjamma of Palakayooru asked me for Rs 10.

In the late afternoons, illicit liquor is sold publicly at many points on the road from Agali - the administrative headquarters of Attappadi - to Anakkatti on the Tamilnadu border. The last bus from Anakkatti to Agali that leaves late in the evening is full of boozers, both men and women-labourers, who have wasted their day's earnings on illicit liquor.

With so much illicit liquor flowing, the region is awash with signs of social cracks. Domestic violence, crimes by and against adivasis, and harassment of the tribal women by outsiders are all alarmingly high. Psychic disorders and suicides, which were unheard of among the tribes till recently, are also on the increase. "After sunset our ooru becomes a real hell," says Suma, 30, of Kallamala in Agali gram panchayat. Her husband and her brother-in-law committed suicide two years ago.

Suma continues, "Whatever the men earn, they spend on liquor, and we, the women, raise our families all alone. How long can we pull on like this?" Many women, like Janaki, 30, of Veetiyooru, a Muduga hamlet, have sent their children to faraway hostels lest they too become addicted to illicit liquor. Most of them later on become dropouts. When I ask Janaki if there had been any liquor-related deaths in her inhabitation, she starts counting. After folding all the ten fingers, she glances at me and says, "six more." 16 young widows in a 100-member community!

The excessive consumption of illicit liquor, that too on empty stomachs, has taken its toll on the health of the tribespeople, points out Prabhudas, who has been working in Attappady for 12 years as a government doctor. The primary health centre (PHC) in Pudur, where he works now, functions round the clock. On an average, Prabhudas treats 150 outpatients a day. The hospital ward with only 10 beds houses at least 50 patients at any point of time. Among them there are many with alcoholic hepatitis, acute anaemia, tuberculosis and gangrene. In Attappadi Block there are 300 gangrene patients, says Prabhudas. The PHC has now started holding monthly psychiatric camps for the tribes.

"Excessive drinking has severely affected the fertility of the tribesmen, and consequently the tribal birth rate is falling," Prabhudas says. Since almost all the tribal women are severely anaemic due to hard work and malnutrition, and 80 per cent of the newborns are underweight, their survival chances are very low. In Attappady, the infant mortality rate (IMR) is four times higher than the state average of 12 per 1000 live births. And now, liquor-related deaths too. And most of these are men below 40.

As seventy-year old Maruthi of Sholayur sums up in her Irula dialect, "To make chaaraayam stronger, they skin the trees and put the bark in the brew. These trees eventually go dry and we use them as firewood. But just like those skinned trees, our lives too shrivel and go dry." (Quest Features & Footage)

M Suchitra is an independent journalist with Quest Features & Footage. She is the winner of the 2006 Developing Asia Journalism Award.