Demonetisation and the Rule of Law

Demonetisation is primarily about the Rule of Law in our country and the capacity of the state to ensure, and abide by, the Rule of Law, comments Harish Narasappa.
27 November 2016 -

Much has been said already on the demonetisation of the Rs 500 and Rs 1000 notes that the central government announced earlier this month.

The debate since then has largely centered on the soundness of economic thinking behind the decision, the failure to plan its implementation properly, and the potential impacts, positive or negative, on 'black money' in the country. Demonetisation is not however only about sophisticated economics and black money. It is primarily about the Rule of Law in our country and the capacity of the state to ensure, and abide by, the Rule of Law.

Black money has been generated and sustained in India over the years because of the state's failure to properly implement laws relating to taxation and banking. No significant punishment has been imposed on people who have consistently breached taxation laws. Similarly, very little meaningful punishment has been meted out to people involved in the various banking scams that have surfaced over the years. 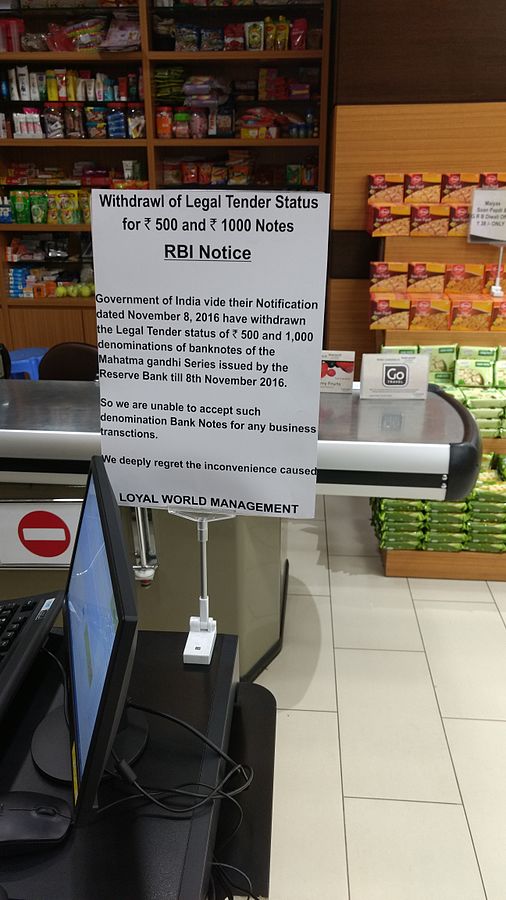 When there are more benefits in continuing illegal behaviour than complying with the law, it will lead to an increase in such illegal behaviour. Black money is but one result of this behaviour. By utterly failing to enforce its own laws, the state has in effect failed to distinguish between legal and illegal conduct, and encouraged impunity for the latter.

This failure is not only because of incompetence or lack of capacity but also due to the active involvement of politicians, bureaucrats and law enforcement officials in the process of generating and sustaining black money. This collusion occurs at all stages and all levels of our economy and governance structures. Consequently, there is no expectation that legality will be protected and illegality punished. Even worse, there is no certainty that the law will be enforced, and certainty is one of the mainstays of the Rule of Law.

The decision to demonetise only adds to this uncertainty. Apart from certainty, the Rule of Law requires that all laws and rules be made in a manner that promotes stability and predictability, enabling the citizens to plan their affairs properly. The abruptness of the announcement, in the absence of any great emergency, makes the decision questionable from a Rule of Law perspective.

Subsequent daily changes to the rules of implementation (limits on amount of cash that can be withdrawn or exchanged, number of visits to the bank, etc.) have only added to the unpredictability and uncertainty, even if only in the medium term, as suggested by the government. A democratic government bound by the Rule of Law cannot function in this manner, where laws and rules lead to uncertainty and unpredictability, causing chaos.

In addition, the government needs to follow a certain process in making laws. While an elected government is, and should be, free to make policy that it believes in, it cannot make such policy without adequate discussion - the Rule of Law demands that such discussion happen fairly and freely, and along a predictable process. Surprises do not have a place in a democratic society that swears by the Rule of Law.

Belief and conviction about the correctness of a policy do not empower any government to ignore discussion and processes in a democracy. Unfortunately, all political parties in India, when they are in power, view the need for discussion in policy-making as a hindrance to achieve their agenda. In this case too, that is apparent - a large part of the debate about processes has been deflected by the government, using the claim that demonetisation is nonetheless a 'good' thing. But the Rule of Law is firmly rooted in the belief that 'good' things are good, partly because they adhere to processes.

The demonetisation decision is only one in a long list that ignore the Rule of Law. Because of its widespread impact, it has weakened the Rule of Law even more. The policy has not even made a minimal effort to differentiate between people who have followed the law until now and those who have not. An obvious example is the ease with which Janardhan Reddy was able to access and spend crores of money on his daughter’s wedding whereas an ordinary citizen had to struggle to withdraw even Rupees 2.5 lakhs for a wedding in her family.

The effectiveness of the demonetisation will be proven only if state institutions enforce the law against those whose illegality has been apparently been exposed by this move–I say apparently because there is debate about whether black money has been really exposed or not. However, our institutions do not inspire confidence. We are relying on the same people and institutions that were responsible for the generation and sustenance of black money to miraculously change track and implement laws going forward. Such a drastic change will not happen overnight. Institutions must be strengthened and a Rule of Law culture needs to develop before we can expect such change.

This can only happen through a sustained commitment to the Rule of Law by all concerned. And unfortunately, that commitment is not visible at this moment. To the contrary, this government is also following in the footsteps of previous governments in ignoring democratic and Rule of Law processes by treating them as inconveniences.

Harish Narasappa is a lawyer based in Bangalore.