Dance has long been regarded as an aesthetic form of self-expression and entertainment. Therapy had very little to do with it. But in Kolkata, that is changing now, thanks to a few committed individuals. Shoma Chatterji reports.
15 June 2008 -

Written in a neat, rounded hand, these lines of poetry belong to a notebook with another 100-and-odd poems created by a prisoner serving a life sentence at Kolkata's Presidency Correctional Home. And poetry is not the only unexpected thing here; looking around, one can see right away that this is nothing like what one imagines a prison to be. Some inmates are occupied in creating collage, some paint, some write poetry and some dance.

There is a particularly strking story behind the dancing. For more than a year, Alakananda Ray, a famous danseuse of Kolkata, also a teacher and choreographer for nearly five decades, has been training the inmates here. Dance hasn't brought them freedom - that is for the law to determine - but it has certainly given them something meaningful. It has made them smile, something they had forgotten to do for a long, long time. And for the first time in the history of this city, since December 2007 the inmates have been regularly allowed to come out of their confinement to rehearse on the Rabindra Sadan stage, for a performance in the near future.

Says Ray, "When I took up this eight-month workshop in dance training on invitation from the correctional home, not one of these 50 men and 10 women inmates had a smile on his or her face. Around 75 per cent are serving life imprisonment. After initial resistance, they warmed up. We held a show after the first phase of the on-going training, to great applause. This training will not change the term of their prison sentence in any way. But it has brought back that missing smile. Today, they make me smile when I am not smiling."

The initiative came from Ray herself. "It was a trivial incident. One day, I saw a shopkeeper scolding a small boy. When I tried to butt in, he said, 'you cannot imagine how many times this boy has been jailed.' I was curious. What can such a small boy do to land him in prison every now and then? I asked him why he did something to be put in jail. His answer was simple. "I will go again. I can at least get two meals a day," he said. That made me decide to do something for juvenile delinquents in the only way I can - through dance," says Ray. Today, the ones who had stopped speaking, are talking because dance has motivated them to lead normal lives within the prison bars. For their show, have made their costumes and stage props themselves. 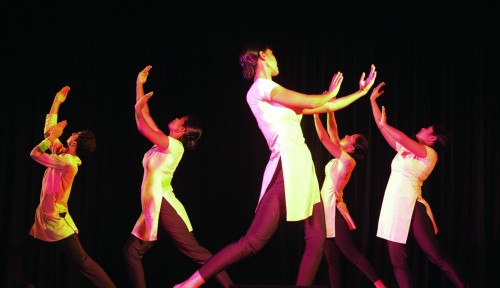 Ray began training them in Kalaripayattu and other martial art dance forms. "Once their bodies became flexible, I taught them some folk styles such as Baul, Chhau, Santhali and Dandiya from different parts of the country. My experience told me that they would not enjoy classical dance styles because they were not conditioned to classical forms either as audience or as performers. So, based on their training in martial art and folk forms, we plan to present Balmiki Pratibha and Beyond the Boundaries at the Uday Shankar Dance Festival this year," she says.

Dance has long been regarded as an aesthetic form of self-expression and entertainment. Therapy had very little to do with it. But a few committed individuals and organisations in Kolkata have changed this rigid mapping of borders. They have pushed dance to reach out to those to whom it held little or no relevance in their lives, marginalised as they were within the straitjackets of social, mental and physical obstacles.

Preeti Patel, who works with victims of cerebral palsy under the umbrella of her Anjika Centre for Manipuri Dance and Movement Therapy, says, "When I began training these children, disabled by cerebral palsy in 1990, they were small. One girl could not even get up from her wheelchair. Today, she travels freely in public transport and carries her cell phone with her. In fact, when a co-passenger requested someone to offer her a seat, he retorted questioning why she needed a seat? These are children who are born without the natural rhythm mainstream people like us are born with. I had begun with the aim of treating them towards health and well being. Eighteen years on, and I feel that the treatment has been for me and not them. It is my life that is enriched."

This alternate function of dance - as a way of mainstreaming people with mental and physical disabilities, or, people who are socially handicapped - is being used by Kolkata Sanved, an NGO that is trying to establish itself as a Centre of Excellence for Dance Movement Therapy (DMT) in South Asia. It is registered as a Society under the West Bengal Society Registration Act. "Ours is a pioneer organisation in the field of DMT in South Asia. We use it to achieve psycho-social rehabilitation, counselling, empowerment, healing and a mode of expression for victims of violence and trafficking, marginalised people, people facing mental challenges and people suffering from HIV/AIDS," says Sohini Chakraborty, Founder-Director, Kolkata Sanved.

"Kolkata Sanved began as an experiment within a shelter home for victims rescued from trafficking and sexual abuse. This grew into a movement for the establishment of dance therapy as an alternate psychotherapeutic form, now adopted by over 30 partner organisations in India, Bangladesh and Nepal. Our Sampoornata curriculum includes processes that enable individuals to come to terms with their situation and their bodies. We have worked directly with 2500 individuals and has had an impact on not less than 5000 people," she added.

Kolkata Sanved began as an experiment within a shelter home for victims rescued from trafficking and sexual abuse.

Kolkata Sanved works with 20 organisations and holds regular dance therapy classes at several centres across the city and suburbs. "Victims of abuse and violence, people living with HIV/AIDS, etc. are not comfortable with their bodies because they are in trauma for a long time. Nor are they comfortable with their minds. Breaking through conventional barriers of traditional counselling and therapy, Kolkata Sanved helps each individual participant of its programme reclaim her body and life through a new-found sense of freedom, peace and confidence," explains Sohini.

Kolkata Sanved helps adolescent and child victims of sexual exploitation to assert their rights as individuals and to find a place in the mainstream. It aims at building the capacity of lined institutions like NGOs and government shelter homes for professional development of victims of abuse as peer educators and activists. A group of young girls and a boy - Khateja Lhatun, Sudeshna Bag, Laxmi Khatun, Sabita Debnath, Nasima Khatun, Jhulan Sarkar, Ashley Fargnoli and Bappa Ghosh, trained in dance by Kolkata Sanved as trainee-teachers, serve as peer educators to train inmates of other NGOs like Anjali, Apne Aap Women Worldwide, All Bengal Women's Union, Nirman-Baruipur, and New Light.

"We work on a four-pronged programme that involves counselling, empowerment, advocacy and awareness campaigns and performances," says Khateja Latun, a peer educator with Kolkata Sanved. "We have developed specialised techniques that use dance and movement to build positive attitudes and body image among participants. Our therapeutic process provides a platform to discover, recognize and develop one's individual potential. Participants, who later develop as volunteer-trainers, have the freedom to work around their own conceptions and ideas and express themselves independently. Through teamwork, encouragement and involvement of every member, each person gathers the strength and the ability to take charge of his or her own life. Many of them have turned into peer educators, thus empowering themselves to earn their livelihood through DMT."

Advocacy and awareness campaigns are conducted through meetings, seminars, conferences and performances in partnership with other NGOs, corporations, community-based organisations, schools, forums, dance platforms and individual dancers and dance teachers.

Suman Saraogi of World Dance Alliance teaches children from the Oral School for the Deaf. Jhoolan Sarkar trained by Kolkata Sanved works with inmates of two Kolkata mental homes who are taught to extract joy out of the simple exercise of standing in a queue and throwing their hands up together to music, when and as they can. Eyes shining bright, bodies undulating, swinging this way and that, footsteps keeping time and harmony to music, these disadvantaged members of society have learnt, and are still learning how dance can make a difference and change their lives.