New Delhi's two months time for feedback on its draft Coastal Management Zone notification expired on 8 July. Activists say the proposed law will make way for beach-front villas and water-front recreation parks and do little to protect the rights of fisherfolk and the environment. Krithika Ramalingam reports.
09 July 2008 -

Sun-kissed beaches that will bring in tourist money and acres of sand free of fishermen: that's the vision of successive governments for the Marina and its adjacent beaches in Chennai. When repeated efforts to relocate fishermen failed thanks to resistance, the Tamilnadu government is turning to a proposed notification of the Ministry of Environment and Forestry that is purportedly meant to protect the rights of fishermen.

At least that is how the fisherfolk of the 10 villages from Nochikuppam to Kottivakkam, in the southern part of the city, see a proposed Rs.509 crores-elevated coastal highway. While the Government of Tamilnadu touts the 9.7-km span bridge as the mother of all solutions to traffic snarls in the southern half of the city, for the fisherfolk it is the latest in the state's efforts to dispossess them to make way for water parks and housing projects. 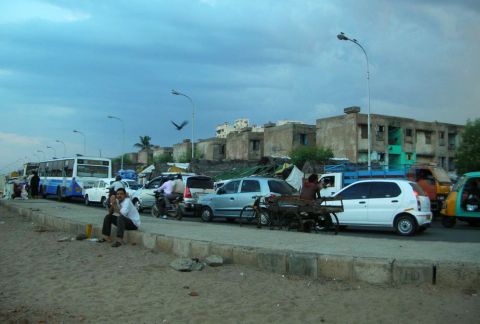 Clouds of uncertainty: The jammed two-lane service road abutting the Tamilnadu Slum Clearance Board settlements in Nochikuppam, Chennai, is all that separates the fishermen from their boats and nets. With the state government going ahead on works to acquire land for an elevated highway project, around 10,000 fishermen who call these crumbling buildings (behind the road) their home fear they would be forcibly relocated in-land and away from the place of their livelihood.

Ku Bharathi, South Indian Fishermen's Welfare Association representative president says the fisherfolk living around the Marina have been on eviction notice since the 1980s. "The then AIADMK Government asked us to remove catamarans from the shore. Protests lead to police firing and the Supreme Court stepped in to suspend the eviction orders. In 2003-04, the Jayalalithaa-led AIADMK government wanted to build a luxury resort. The Coastal Regulation Zone notification (under the Environment (Protection) Act, 1986 came to rescue of fishermen, forcing the government to retract that proposal."

Fisherfolk suspect that the Ministry could go ahead with the notification mainly because they have been given only two months time and civil society organisations are still trying to gather opposition. They fear the proposed bridge would be a fatal blow to their livelihood. "The draft notification says governments can allow development on the landward side of existing roads or proposed roads approved by Coastal Management Zone Plan, in urban coastal areas (category CMZ II)," says Ossie Fernandez of Coastal Action Network, a coalition of civil society organisations, lawyers, scientists and a fisherfolk's movement based in Nagapattinam.

Reading this with the fact that fishermen follow a oral tradition of land rights and lack ownership documents, Bharathi and fisherfolk leaders say the bridge project will dispossess an estimated one lakh fisherfolk in the eight villages.

"After tsunami, in order to get the coasts cleared, the government started terming fishing habitations coastal poromboke land and started looking at fishermen as those encroaching on Ggovernment land," says Fernandez. With the CMZ, they can complete the eviction and make way for beach-front villas and water-front recreation parks, he feels.

Citing the lack of transparency in drafting the CMZ notification and terming it an eviction law that does not protect the rights of fishermen, activists are demanding that the Ministry abandon the draft notification.

A setback line - on whose seaward side no development can take place - yet to be marked the government is laying roads on beach front at a frenetic pace in the name of walkers' paths in Chennai's southern suburbs. A storm-ravaged pedestrian bridge that has been in disuse since the 1960s, on the Adyar creek, is now being shown as an existing road to seek permission for the 6- and 4-lane highway.

Though the project would be a violation of CRZ, the government has started land acquisition process. The new CMZ regulation, when it comes into being, will regularise such violations, as it supercedes the 1991 notification "except for things done or omitted to be done before such supersession."

Says Fernandez: "The draft CMZ proposes regularisation of violations such as structures built on the seaward side of the existing roads and structures built/approved contrary to CRZ definitions, if they are built/approved before 2008. The road project, which will be within 500mt of the hightide line would thus be legalised."

At a recent meet held by Chennai-based Citizen Consumer and Civic Action Group (better known as CAG), activists pointed out that the CMZ II (developed areas) now includes villages with a population of 400 per square kilometre. "The entire Kerala coastline would now come under the CMZ II, which while giving opportunities for tourism, ports and industrial projects, would severely undermine housing for fishermen. This would only lead to severe displacement," says V Vivekanandan, Advisor, South India Fisherfolks Society (SIFFS), Thiruvananthapuram.

New notification a threat for the environment

Activists in Tamilnadu point out the move will negatively impact fisheries allied work. Beachside tourist resorts wall off beaches restricting movement of fishermen into inter-habitation spaces, where they traditionally involved in activities such as auctioning and maintenance of fishing gear. With the inclusion of many of these hamlets with over 400/sqmt population in CMZ II, coastal tourism and urban development will take wing much to the detriment of fisherfolks' livelihood rights, says Dr B Subramanian of SIFFS. 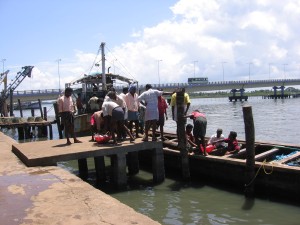 Subramanian cites the example of conflicts between fishermen and a five-star resort -- Taj Group of Hotels Fisherman's Cove -- on Kovalam fishing village. Fishermen here are seen as trespassers on the resort, even though the resort beach and the backwaters nearby are their traditional landing sites.

Another aspect of the CMZ that has activists up in arms is the removal of No Development Zones. "While efforts should be taken to add infrastructure for fishing within 200 mt of the shore, including industries, tourism, petrochemical parks or mining in the list of permissible activities takes the shoreline away from the primary stakeholders, the fishermen. This aspect of CMZ dilutes the protection that CRZ offered," says Vivekanandan.

Activists from Andaman and Nicobar Islands, which falls under CRZ IV, point out that implementation of the CMZ rested with the Island administration who gave resorts permissions to build right on the beach, in violation of the no-development-zone of 200 metres. Bhuvaneshwari Devi of Human Rights Law Network said even the minimum protection CRZ offered was taken away with the CMZ, with the scrapping of the No Development Zone. "With no powers given to local bodies to monitor these permissions in the CMZ, resorts will proliferate even in the most environmentally fragile areas."

Environment also takes a back seat in the new notification. The CMZ allows for seawalls as coastal defence mechanism, replacing natural defence mechanism like sand dunes and does little for coastal ecosystem, says R S Bhalla of Foundation for Ecological Research, Advocacy and Learning, Pondicherry.

"A recent study showed 35 percent of coastal evergreen forest were replaced with farms. Vegetation in backwaters has come down due to shrimp farming. Damming of water for agriculture in rivers (tributaries of Cauvery in the delta districts of Cuddalore to Nagapattinam), has meant that fishing catches for upstream fishermen, who are Dalits and Tribals, have been dwindling," Bhalla says.

Bhalla observes that the draft notification has no provisions for protecting the rights of non-fishermen who depend on the coastal ecosystem. The changed/depleted ecosystems should be protected under CMZ and should be categorised as ecologically sensitive zones (CMZ I), he adds.

Neither are the lawyers happy with the draft notifications. To them, the law is fraught with poor definitions and little power to police. K Amritha and Rama Lakshmi of CAG observe that category CMZ I has been opened up for 'essential' development. However, what is essential has not been defined. The identification will be done by the central government with the state and the proposed National Institute for Sustainable Coastal Zone Management. It does not include the local bodies or fisherfolk in the decision making process.

Similarly in CMZ II, there is no definition of what industries would be allowed with the notification failing to enlist industries that would require foreshoring facilities on the seaward side of the setback line. The loose definitions would only expose the shoreline to unsustainable/polluting activities, they say.

The Ministry of Environment and Forestry gave NGOs and fisherfolk time till 8 July 2008 to respond to the draft notifications. The draft has been online in the MOEF website since May 1, and changes were made to it on May 8. Activists are now tempted to seek its cancellation. "The drafting process has not been inclusive of all stakeholders; the fishermen have been excluded even in the discussion phase with the notification being published only in English with no translations into local languages," say activists.

Citing the lack of transparency in drafting the CMZ notification and terming it an eviction law that does not protect the rights of fishermen, activists demand that the Ministry abandon the draft notification. "The CRZ notification 1991, despite being watered down with 19 amendments, offers greater protection to fishermen. Repealing those amendments and strengthening the framework for implementation of CRZ is the only way to protect fishermen," says Fernandez.

Towards that end, fishermen from the coastal states and their representatives want the government to notify the setback line in consultation with them, taking into account local histories along with scientific mapping. They also seek an enumeration of all constructions that have happened in violation of CRZ and their regulation in accordance to the provisions of CRZ. With a stress on local governance, fisherfolk also want devolution of powers to panchayats to approve developmental projects.