Seven months after last year's disastrous flooding finally ended, residents in low-lying areas southeast of Bangalore are anxious what this year's monsoon rains will bring. With city authorities yet to tackle the infrastructure problems of the area, many can do little more than hope. Padmalatha Ravi reports.
05 June 2006 -

This May residents in Bangalore saw temperatures rise to new highs, forcing them to stay indoors. When the temperature soars to 38 degrees, summer showers are certainly welcome, and on several days evening showers provided some respite from the uncomfortable heat. The rains, however, brought along with them quite a bit of anxiety too - especially to residents in the outskirts of the city. Constant fear of flooding in some neighbourhoods means they must remain watchfully awake on rainy nights. Memories of last year's flooding of lakes and being marooned in their own homes are still fresh in their minds.

•  Bangalore: Whither the future?
•  A city's recipe for disaster
•  A spate of neighbourliness
•  It says about a city

The Bangalore Mahanagara Palike (BMP), which focues on Bangalore city, and the City Municipal Corporations, which have jurisdiction over most outlaying areas, have together announced a series of actions this year to avoid repetition of last year's situation. In advertisements in several newspapers in the city, municipal authorities have announced that they have undertaken various steps - drain clearance, restoration of pavement, better garbage removal, etc. - and also appealed to citizens and businesses to keep these public spaces free of obstacles to water run-off.

But this has not had the calming effect on the frayed nerves, largely because such work is far from complete. Gladys Pereira, a resident of Bommanahalli area near Electronics City southeast of the city, is sure her area is not ready for contingencies. She says "Even the lightest rain gives me nightmares. Last year, my house was submerged for four days. I lost all my furniture. Whatever we could take out we put it all up in the single room on the first floor and lived there for four days. We didn't even have drinking water. Now the authorities have promised various measures but I have seen no action so far and I am worried."

Begur and Bommanahalli were among the worst hit in last year's deluge. The area was listed among the most vulnerable areas; the then Commissioner of the Bangalore Development Authority (BDA), M N Vidyashankar cited the presence of four water bodies - indicating natural low-lying areas - in the area as the reason for the flooding. An explanation that haunts the residents of the area anytime they try to get the officials to act. Pereira says, "They keep asking me why I built the house in a low lying area like this. They didn't tell me this when I paid the property tax or when I paid for the electricity connection for my house. They bring this up when I ask them to help in a flood situation. Is that fair?"

Residents say they have been neglected. Shivakumar, president of a residents' association in the area, says, "Even during the floods no official came to see us. The ministers and everybody came up to the main road, and even this after the water had drained off. When we tried meeting officials we were sent from pillar to post." And although the state government has planned a merger of the various municipalities into a single body (see LINK), for the moment at least, residents are passed around from one authority to another. "BMP says the problem is within the jurisdiction of the Bommanahalli CMC, and over there no one accepts the responsibility. This is how they treat us." says Shivakumar.

Seven months after the disaster, little of the promised action has seen the light of day. The proposed widening of Raja Kaaluve (the main storm water drainage) here has not been completed. The drain was constructed in 1997 when the area was still underdeveloped. Today there are more than five hundred structures that have come up and the old drainage system is failing to support the growth. Compounding the problem is the dumping of garbage directly into the drains by some residents. Tired of waiting for CMC to take action, the residents took out a march through the streets of Bommanahalli demanding action. When no one took notice, they decided to march to the CMC office itself and submit a petition. In the first week of May more than hundred residents gheraoed the CMC office and submitted a petition requesting immediate action. The following week the area witnessed some cleaning but only superficially, and the agitation was forgotten. 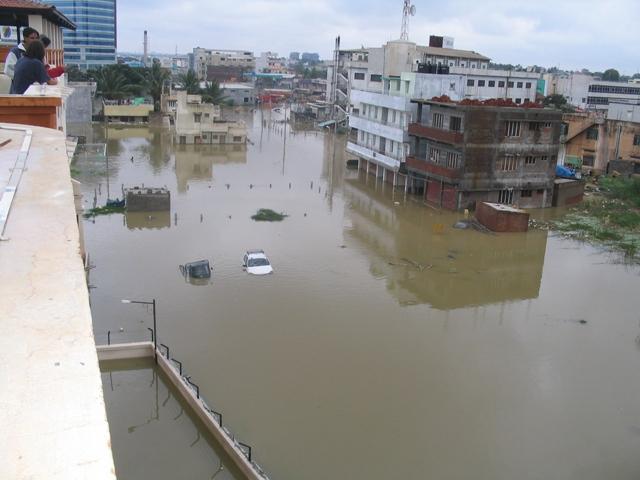 An apartment complex full of more than six hundred residents waits for some action from CMC. The compound wall surrounding the apartment was damaged during the floods. The CMC announced that the particular wall was an encroachment on the drainage behind, and could not be reconstructed until the issue was resolved. Seven months on, and no decision has been taken. Heavy rains in the last week of the month have the apartment owners worried. "The drainage is full and blocked. Even a little rain will make the drain overflow and it will come into my house because no decision has been taken. We have hastily constructed a wall now to avoid trouble, but if CMC comes back and says we have to knock the wall off, we have no choice but to do it. All this is costing us so much money and anxiety but no one seems to care" says Vivek, an apartment owner.

Even the business establishments in the area not been spared the anxiety. Satyan, a shop owner, recalls the dreadful week when he had to close down his shop for a week because of the deluge. "If it happens again I will lose everything. I have not managed to recover from last year's losses yet."

Following pressure from the government, BMP has announced desilting of all the drainages in the city and fining anyone who is found dumping garbage into the drainage. Rame Gowda, Chief Engineer of BMP, says this is one of the action items in the 12-point contingency plan they have come up with, to avoid flood-like situations in the city. CMC has identified more than 50 buildings in the city that have been illegally constructed blocking the drainage and outlets of tanks and lakes. The owners of these buildings have been issued notices for eviction. The Chief Minister had initially set a deadline for all this work to be completed by 15 May. Now the deadline has been pushed to 15 June.

While the lasting effect of all this action is yet to be seen, one question - how the buildings were allowed to come up in the first place - remains unasked. In Bangalore, as in other cities grappling with the fallout of unregulated or corruptly regulated growth for decades, no blame is assigned for the failures of the past, and no officials face risk of penalties. Many point out that since none of the corrupt municipal administrators of past years faces any penalties for misconduct, today's officials too act with impunity. And so this monsoon too residents, although they hope that civic bodies will arouse themselves sufficiently, are anxious that once again they will be forced to fend for themselves against the crumbly infrastructure of their neighbourhoods.

One month of this season's rains has passed without untoward incidents, but with the full force of the monsoon still to be felt, residents here remain a worried lot. (Quest Features & Footage)

The author is an independent journalist associated with the Quest Features & Footage, Kochi.