Challenges of the brass in a political minefield

A recent announcement by the army chief that officers of all ranks of the army will donate a day’s pay to the PM’s relief fund for Kashmir floods has triggered an interesting exchange, throwing light on the broader trends of politicisation within the military. Firdaus Ahmed has more.
10 February 2015 -

The army chief at his ‘At Home’ on the occasion of Army Day on 15 January announced the donation of a day’s pay by all ranks of the army to the prime minister’s relief fund for the floods in J&K. On the face of it this is a noble gesture and has precedent in the army having similarly risen to the occasion in the aftermath of the tsunami disaster. Given that a major proportion of the army is perpetually deployed in J&K and played its usual sterling role even during the recent floods, this generous act aiming to build bridges with the Kashmiris is yet another feather in the army’s cap.

However, soon thereafter, the media reported on the intention of at least three colonel-rank officers to take the army to court over the deduction of a day’s pay without due consultation. The army for its part clarified that the idea had been mooted in last year’s army commanders’ conference and had been suitably acted on procedurally. But the sting in the media report was the contention of the unidentified colonels, one of whom reportedly stated: ‘The donations in Jammu and Kashmir have political ramifications and the Army should refrain from sending any such signals.’ 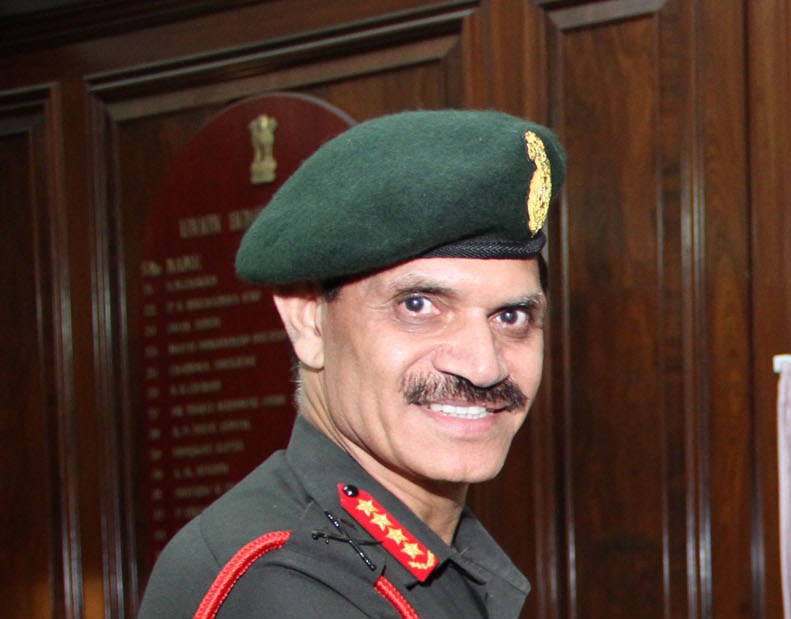 The politics surrounding the donation escalated with a former colonel, Karan Kharb, writing in the RSS mouthpiece, the Organiser. Kharb writes that these ‘few superseded disgruntled officers and subordinates with perceived grievances’ foretell the ‘creepy rise of Fifth Columnist elements within the Armed Forces’. The author justifies the army’s decision, citing the relevant orders permitting its leadership to take such decisions on behalf of the rank and file.

While the aggrieved colonels had apparently given vent to their feelings incognito on social media, that the right wing flagship publication, Organiser, has been chosen as the forum to launch the counter attack is interesting in itself.

Incidentally, the retired colonel has earlier also written for the Vivekananda International Foundation, whose founder director is India’s current National Security Adviser, Ajit Doval.  In his hagiography of the NSA, Colonel Kharb had called Doval, ‘Chanakya’. What does this linkage suggest?

Earlier the politics surrounding the issue was somewhat muddled. It was not clear whether the aggrieved serving colonels were against the donation because it was for a cause in J&K. From their social media post, it appeared that they did not want this given to J&K since similar contributions had not been given in equally grave instances earlier, such as the floods in Uttarakhand. This suggested an animus against Kashmiris receiving army largesse.

Alternatively, it could be read as the colonels pointing out that the army’s contribution was at the government’s behest. The ruling party is in the midst of setting itself as part of a coalition in Srinagar. Such gestures could help ease its way into an agreement with the other Kashmir-based party, the PDP. In that context, the colonels appear to be pointing out that the government was merely playing politics with the army through its move and the army should distance itself from such (ab)use.

The article in Organiser can be credited with clarifying the issue somewhat. With the publication jumping in to justify the contribution, the latter interpretation of the serving colonels’ grievance gains credence, thus implying that the ruling dispensation possibly had a hand in it. The initial discussion on the contribution took place in October when the BJP was attempting to do the impossible, its ‘Mission 44+’ plus in Kashmir. Now, it is yet again poised to do the unprecedented, govern from Srinagar.

Author Karan Kharb’s VIF-mediated links to the NSA indicate that the idea may have sprung from outside the army. Else, there is little reason for the Organiser to involve itself in the defence of the act, even though on Twitter, the author  takes pains to distance his article from the RSS, which is strange given that it appears in an RSS publication.

If this reading is true, then it implies that the apprehensions on which the aggrieved colonels acted were well-founded, even if their action itself is lacking in legitimacy. The retired colonel, likening their action to ‘insidiously planned subversion’, has given enough grounds to suspect as much.

Are we reading too much into it?

An alternative explanation cannot be discounted. The army brass, aware that there was an image makeover necessary in Kashmir, was counting on the army’s show of response to floods and the contribution of a day’s pay to help with this. Theirs is a well-intentioned move with the strategic purpose of perception management. However, the regime, prompted by its political agenda in Kashmir, is attempting to take the credit by seeking to be identified with the move.

Let’s take another example from Kashmir. The army commander there had courageously taken the blame for the killings of two youth at Chattergam. He came under fire in social media apparently from serving officers and from telegenic veterans for his unprecedented apology. Consequently, he had to explain himself in a follow up demi-official letter to his commanders in wake of the terrorist attack in early December in Uri.

Explaining his act as prompted by the nuances of the changed situation in Kashmir, he reminded all not to fall ‘prey’ to the media. The army commander was evidently not acting at political behest but under the conviction, in his words, that, ‘Our Army's ethic and values, backed up by a strong military justice system, are the best in the world. These will serve to guide us and also protect us.’

Nevertheless, his action was used to wrest political advantage, as the then defence minister Arun Jaitley, on a trip to Srinagar, cited a call from the prime minister as the trigger for him to get the army to act. The prime minister on the campaign trail appropriated the credit too, stating it was ‘proof of his good intentions’.

Under the circumstances, there is ample reason to fear for institutional good health. The former foreign secretary on being shown the door has alerted all to the fact saying, ‘‘It’s not about individuals … it’s about my Ministry as an institution.’ The country’s defence research head has been put to pasture. Earlier, a string of governors owing allegiance to the previous regime were eased out. The latest is the home secretary being axed.

Arbitrary behaviour has not spared even the BJP itself, with its Delhi unit having a chief ministerial candidate parachute down on it. Clearly, if other institutions are in the firing line, being forced to fall in line, then the army cannot be too far behind in the queue.

The way the wind blows today

One of the first acts of the government on taking over last year was to allow the chief designate appointed by the previous government to continue in saddle, despite his run in with the political general, VK Singh, by then a junior minister in the government. This was in the event a well thought-out decision, in that it kept stability even while serving notice to the brass on the unspoken possibilities. In its messaging on unspoken possibilities, it was equivalent to the somewhat untidy dismissal of Admiral Bhagwat on the accession of the last NDA government to power.

Whereas political heads can be expected to take advantage of the government’s showing on defence, the brass needs to remain ever alert to the political impeccability of their actions. That political missteps are being pointed out from within the ranks is a new phenomenon brought to fore by the ready availability of social media. It is no wonder that the brass is rightly frowning down upon its use. In the absence of such checks, the onus is on the brass to keep up the institution’s hard-earned and arguably well-deserved reputation for political impeccability.

Firdaus Ahmed, a regular contributor, is author of Subcontinental Musings and Think South Asia. He blogs at www.subcontinentalmusings.blogspot.in