A better way of selecting the top brass

Nothing is lost by abandoning the principle of seniority, but the armed forces need restructuring says Nitin Pai.
23 December 2016 -

The Modi government decided to supersede two general officers and appoint Lt Gen Bipin Rawat as the next chief of army staff. In a system where seniority has risen from a criterion to the criterion, and where “lines of succession” are drawn in a manner to mirror royal succession in monarchies, the move has shocked many. After all, the last time such a thing happened was in 1981 when the Indira Gandhi government appointed Gen A S Vaidya over Gen S K Sinha’s head. 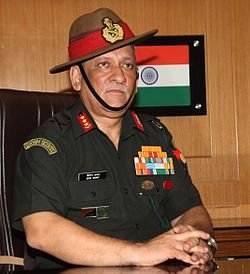 Lt. Gen. Bipin Rawat who will be the next Chief of Army Staff. Pic: Wikimedia Commons

Here’s the thing: the Modi government has done well to break a norm that had so become an entitlement that it had begun damaging the incentive structures of the the military leadership. The sordid saga of Gen V K Singh five years ago revealed that the army’s leadership was spending undue energy on manipulating promotions and appointments to ensure desired lines of succession.

Any organisation whose leadership is engaged in such machinations is likely to suffer loss of professionalism. By elevating seniority to a sacrosanct principle, we might well have depoliticised appointments at the level of the political leaders picking the military leadership. However, it does not mean we have depoliticised appointments within the military establishment. Because of secrecy and respect that the armed forces enjoy, the ‘politics’ within the armed forces is generally invisible to the public. That doesn’t mean it doesn’t exist. Just go back and look at the reports that emerged five years ago during the Gen V K Singh’s controversy.

If the Indian armed forces had the luxury of being a showpiece, where they did more ceremonial parades than combat, it might have been acceptable to go by seniority. But India’s armed forces have been fighting wars, proxy wars and insurgencies for ever, and the future presents ever greater risks. In such a context, it is downright absurd to argue the the senior-most officer should become the commander.

Furthermore, it is downright absurd to accept that the service chiefs should be both excellent commanders and excellent staff officers: a great military leader need not necessarily be the best military manager. To roll the two roles into the same office is to get a little bit of both, and the best of neither. Jettisoning the primacy of seniority is the first step: the Modi government must use the opportunity to implement structural reforms to India’s military structure. (It’s clear what such reform should entail: see this article)

There are two important objections to non-seniority based appointments. First, that it would upset the army’s internal appointments and promotions structure. Second, that it would allow the political leadership to appoint military leaders based on partisan, ideological, religious, caste or other criteria unrelated to military merit. Let’s consider each of them in turn.

Yes, superseding officers will cause genuine heartburn, embarrassment and grievances among those adversely affected by the move. The retirement or resignation of those who have been passed over for promotion count as a loss to India’s military capital. That, however, is the price we must pay for a competitive military establishment. Much of this cost is one off, representing what behavioural economists call the “endowment effect”. Because officers expect to be promoted on the basis of seniority, they feel what is rightfully theirs has been taken away. If, from now on, officers no longer expect the seniority norm to hold, they will feel less cheated.

That said, it is incumbent on the Ministry of Defence and the services headquarters to ensure that the superseded officers are treated with respect and decorum; and if they have years of service left, are re-employed in government positions commensurate with their seniority.

The second objection is more serious: what is to stop the political leadership from appointing military chiefs on dubious, non-military criteria? Well, for one, it is not as if lobbying on such grounds has not been taking place. However, the argument that the prime minister cannot be trusted to properly appoint a service chief sounds pretty unserious when the office of the prime minister has everything from the nuclear button to the validity of all legal tender in his hand. If the citizens of India vote in a government in a constitutional manner, and the ruling party constitutionally appoints the prime minister, who selects his cabinet, then that is that.

Now it is not as if the Cabinet can appoint an army chief without being bound by any constraints: they will be limited to a small number of officers to choose from, and any ideological, partisan or communal preference will be constrained by the fact that the armed forces are engaged in active duty. No Cabinet would want to lose battles or wars, or found wanting in the face of external threats. Parliament must do its job and keep the government in tether: so rather than defend the principle of seniority, concerned citizens must demand the amendment of the anti-defection law that has converted MPs into robots under the control of the party leaders.

The Modi government would do well to follow up its departure from orthodoxy with a sincere commitment to restructure the armed forces. Early in his tenure, PM Modi was reluctant to risk this reform. He should not shy away from it now. The K Subrahmanyam report was almost two decades ago; there have been a few subsequent initiatives to study the matter further. It’s well past decision time.