RESETTLEMENT AND REHABILITATION
CAG report on Odisha: Will legislators take note please?
As Parliament debates the amended land acquisition and mining laws, Himanshu Upadhyaya draws attention to the report of an audit of Odisha’s resettlement and rehabilitation policy that clearly highlights the threats to displaced communities.
09 March 2015 -

Over the past few months, we notice a trend wherein selective amnesia seems to have acquired a national fervour. Promises in the BJP manifesto during the 2009 Lok Sabha elections, on how it would make amends for the injustice rendered to farmers by an anti-farmer SEZ policy, appears to have been conveniently forgotten.

The National Rehabilitation Policy framed at the end of the previous NDA regime (1998-2003) had come under a lot of criticism from social movements and this criticism had pressed the UPA government to commit itself to a revision of the National Rehabilitation Policy as soon as it formed the new government. By the year 2007 there were demands for amending the Land Acquisition Act and for a new law that would lay down the norms of fair compensation and rehabilitation.

Thus, the Right to Fair Compensation and Transparency in Land Acquisition, Resettlement and Rehabilitation Act, 2013 has actually seen debates since 6 December 2007, when the first version of the bill was introduced at the end of the winter session of parliament. The bill lapsed, but the groundswell for an amended land acquisition law was such that UPA had to eventually reintroduce it in next Lok Sabha. It eventually became law in 2013 with the then principal opposition BJP bringing in certain strategic amendments, perhaps with their political fortunes in mind.

Similarly, efforts to amend the mining law started in earnest in the year 2009, with the UPA coming to power for a second time. The Ministry of Mines had six progressive draft versions of the proposed amendment within a span of just one year. When we study the various drafts, we find that there was prolonged engagement with representations from the mining industry as well as members of mining-affected communities.

The Mines and Mineral (Development and Regulation) Act (Amendment) Bill had been introduced in the Lok Sabha on 12 December 2011, but that too lapsed. The current Union Cabinet approved the MMDR (Amendment) Ordinance 2014, in January this year. 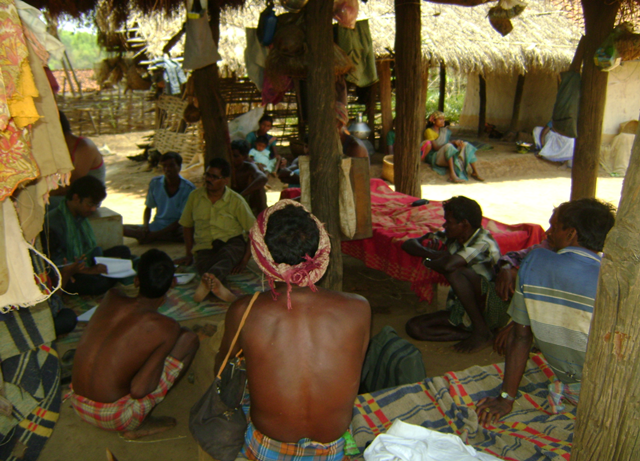 A group of villagers in Anjrel who face displacement due to the Rowghat steel project in Chhattisgarh. Photo courtesy: DISHA, Kanker (from India Together files)

The masses, however, do not suffer from the same kind of debilitating amnesia as our political parties do, or even short-term-memory-loss. They do remember how during those months between April and August 2011, on the issue of Jan Lokpal Bill, an atmosphere had been created that led to demands for free, prior and informed consultations with citizens of the country on legislation making.

Given those memories, the theatrics of the current ruling alliance in taking the ordinance route so frequently are bound to appear unconvincing to the people. In the budget session of parliament, we have witnessed these two ordinances being re-introduced as bills. While on the Land Acquisition (Amendment) Bill, the alliance has been forced to change the text of the ordinance, on MMDR it has introduced a text that represents its ordinance word by word.

While the urgency of land acquisition is being argued, it is worth looking at the hotspots of displacement over the last one decade. It would be helpful to observe what happened to those who were displaced by industrial projects or mining. Have they been compensated, or are they still looking forward to the yet-unfulfilled promise of resettlement and rehabilitation? Have resettlement and rehabilitation policies promulgated by the state governments been followed in letter and spirit?

A performance audit by CAG of India on Resettlement and Rehabilitation of people affected by industrial projects in Odisha is part of an audit report (No 7 of 2014, See Para 2.1, chapter 2) that got tabled in the state assembly on 12 February 2015.

The 27-page-long performance audit presents some startling findings and makes us wonder how long governments can pretend to be blind to violation and injustice.

This performance audit, which looked at the implementation of the Orissa Resettlement and Rehabilitation Policy, 2006 (ORRP), test-checked records related to 32 industrial projects spread across 13 districts. 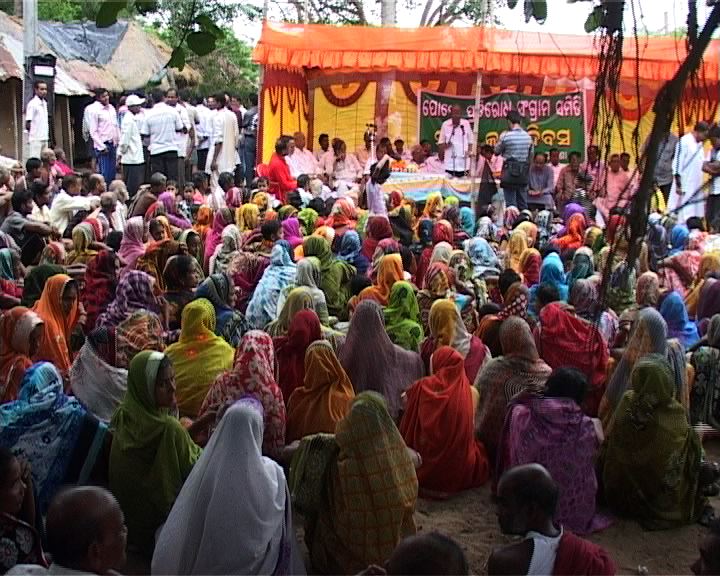 Appendix 2.1 in the audit report gives the list of the 32 projects sampled and shows that even as per official estimates, 6533 families were displaced by way of loss of cultivable land and 35632 families were affected by loss of homestead land and livelihood. These projects had taken a toll of 36555.18 acres of land, some of which haven’t witnessed the realisation of ‘public purpose’ even after a decade.

The audit also talks about a government decision dated July 2013, wherein an enhanced rehabilitation package was proposed, but the same was not acceptable to industry. Audit scrutiny revealed that displaced families submitted a memorandum in December 2013, asking for enhanced compensation as per the July 2013 government decision and that “the decision was pending till date”.

There were two other projects – the Aditya Aluminium Project, Rayagada and Kalinga Nagar Industrial Infrastructure Project, Jajpur – which jointly displaced 312 families. The CAG’s performance audit brings this under scrutiny and states that these 312 families were “identified but not given R&R benefits due to non-setting up of industries” though they were to get R&R assistance under the ORRP.

Responding to this audit finding, the Revenue and Disaster Management Department stated in a reply dated October 2014 that since physical displacement of PDFs (Project Displaced Families) had not occurred, industries did not provide resettlement grants. Having recorded this lame duck reply of the department, the CAG of India observes that the PDFs had nevertheless lost a perennial source of income from land, for a period ranging between 6 and 17 years, and their issues had still not been sorted out by the department!

This performance audit also imparts lessons indicating why Social Impact Analysis must be a crucial component before land acquisition takes place. It reports that as per the ORRP provisions, socio-economic surveys (SES) were primarily intended as guides and bases for preparation of relief and rehabilitation plans and for effective implementation of programmes.

However, audit scrutiny revealed that these SES were deficient in many ways. It was also observed that the SES were not made public in all cases and hence this mechanism had failed to invite objections, thereby leading to diminished scope of hearings.

The performance audit also came across seven projects where developers directly purchased 726.94 acres of land in 19 villages from private land owners, without conducting any SES. The CAG audit tells us that this shortcoming resulted in “identification of affected people and their entitlements under R&R policy” getting short-circuited.

The audit also shows that in respect of 15 out of 32 industrial projects, SES reports were prepared but were not approved by the Rehabilitation and Periphery Development Advisory Committee (RPDAC) and hence, the R&R plan for affected families was not prepared.

The gaps in accountability

If an affected person is not resettled and rehabilitation as per the provisions of the ORRP, then should it be regarded as violation or a mere grievance? This emerges as a moot question. Para 20 of the ORRP provides for setting up of an effective grievance redressal mechanism at the district level.

Audit scrutiny revealed that “no specific mechanism was followed at the Collectorate level to receive grievance petitions”. It was also found that the Collectorate merely acted as a post office from where “grievances related to R&R were forwarded to the project authorities for consideration, but no follow up action was taken”. Audit findings show that there existed a huge backlog of unresolved grievances: out of 2222 grievances received, only 880 were settled!

Also how regularly did those various committees that were envisioned to have performed review and monitoring of the implementation of the ORRP meet? Para 17 of the ORRP lays down the requirement of a council headed by the Chief Minister to advise, review and monitor implementation of R&R policy in the state. But a scrutiny of records revealed that the State level Council of Resettlement and Rehabilitation has met only once on 18 June 2008 in all these years. No second meeting has been convened since.

CAG auditors came across a government circular (August 2012) stating that a “review meeting on R&R should be held at least once in a month by respective district collectors and district magistrates and once in two months by Rehabilitation and Peripheral Area Development Committees (RPADC)”. But audit scrutiny revealed that the collectors or RPADCs of none of the sampled districts could show any record of any such review meeting having taken place after August 2012!

There was no comprehensive database of Project Affected Families available with the department for effective monitoring of R&R.

Reading the audit report, one cannot but wonder if this sad tale of unfulfilled promises of rehabilitation will stir our elected representatives out of the pretence that they have been displaying for so long?

URL for this article
http://indiatogether.org/cag-audit-of-odisha-rehabilitation-for-those-affected-by-mining-and-land-acquisition-government