DNA BILL
The DNA Bill is a recipe for disaster
The Centre for Internet & Society (CIS) registers its dissent over the new Human DNA Profiling Bill draft. Sunil Abraham, Executive Director of CIS, explains how the Bill does not address the privacy concerns despite a seemingly powerful language.
12 August 2015 -

The Centre for Internet & Society (CIS) participated in the Expert Committee for DNA Profiling constituted by the Department of Biotechnology in 2012 for the purpose of deliberating on and finalizing the draft Human DNA Profiling Bill. While CIS appreciates this opportunity given to it, it dissents from the January 2015 draft of the Bill.

Based on the final draft of the Human DNA Profiling Bill that was circulated on the 13th of January 2015 by the committee, CIS is issuing this note of dissent on the following grounds:

CIS has made a number of submissions to the committee regarding different aspects of the Bill including recommendations for the functions of the board, offences for which DNA can be collected, and a general note on the Bill. Though CIS recognizes that the present form of the Bill contains stronger language regarding human rights and privacy, we do not find these to be adequate and believe that the core concerns or recommendations submitted to the committee by CIS have not been incorporated into the Bill. 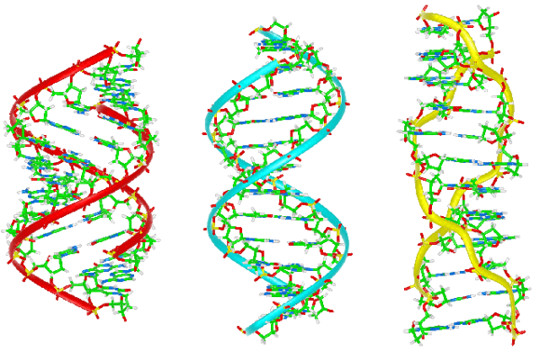 The structures of A, B and Z DNA (from left to right). Pic: Wikimedia Commons

While rejecting non-forensic use entirely, we have specific substantive and procedural objections to the provisions relating to forensic profiling in the present version of the Bill. These include:

- Over delegation of powers to the board: The DNA Board currently has vast powers as delegated by Section 12  including:

“authorizing procedures for communication of DNA profiles for civil proceedings and for crime investigation by law enforcement and other agencies, establishing procedure for cooperation in criminal investigation between various investigation agencies within the country and with international agencies, specifying by regulations the list of applicable instances of human DNA profiling and the sources and manner of collection of samples in addition to the lists contained in the Schedule, undertaking any other activity which in the opinion of the Board advances the purposes of this Act.”

Ideally these powers would lie with the legislative or judicial branch. Furthermore, the Bill establishes no mechanism for accountability or oversight over the functioning of the Board and section 68 specifically states that “no civil court shall have jurisdiction to entertain any suit or proceeding in respect to any matter which the Board is empowered by or under this Act to determine.”

The above represents only a few instances of the overly broad powers that have been given to the Board. Indeed, the Bill gives the Board the power to make regulations for 37 different aspects relating to the collection, storage, use, sharing, analysis, and deletion of DNA samples and DNA profiles. As a result, the Bill establishes a Board that controls the entire ecosystem of DNA collection, analysis, and use in India without strong external oversight or accountability.

- Key terms undefined: Section 31 (5) states that the “indices maintained in every DNA Data Bank will include information of data based on DNA analysis prepared by a DNA laboratory duly approved by the Board under section 1 of the Act, and of records relating thereto, in accordance with the standards as may be specified by the regulations.”

The term’ DNA analysis’ is not defined in the Act, yet it is a critical term as any information based on such an analysis and associated records can be included in the DNA Database.

Low standards for sharing of information: Section 34 empowers the DNA Data Bank Manager to compare a received DNA profile with the profiles stored in the databank and for the purposes of any investigation or criminal prosecution, communicate the information regarding the received DNA profile to any court, tribunal, law enforcement agencies, or DNA laboratory which the DNA Data Bank Manager considers is concerned with it.

The decision to share compared profiles and with whom should be made by an independent third party authority, rather than the DNA Bank Manager. Furthermore, this provision isvague and although the intention seems to be that the DNA profiles should be matched and the results communicated only in certain cases, the generic wording could take into its ambit every instance of receipt of a DNA profile. For eg. the regulations envisaged under section 31(4)(g) may prescribe for a DNA Data Bank for medical purposes, but section 34 as it is currently worded may include DNA profiles of patients to be compared and their information released to various agencies by the Data Bank Manager as an unintentional consequence.

- Missing privacy safeguards: Though the Bill refers to security and privacy procedures that labs are to follow, these have been left to be developed and implemented by the DNA Board. Thus, except for bare minimum standards and penalties addressing the access, sharing, and use of data – the Bill contains no privacy safeguards.

In our interactions with the committee we have asked that the Bill be brought in line with the nine national privacy principles established by the Report of the Group of Experts on Privacy submitted to the Planning Commission in 2012. This has not been done.

Sunil Abraham is the Executive Director of The Centre for Internet & Society.

This article first appeared in Citizen Matters and is being republished here with permission.

URL for this article
http://indiatogether.org/dna-bill-issues-laws