Panchayats of Madhya Pradesh provide reservation of up to 50 percent for women, but the participation of women in governance has gone beyond such new roles. Shirish Khare reports on how women leaders are transforming the very traditions and symbols of grassroots politics.

It does not take much time to form stereotypes, especially if these are negative and related to women. Nearly two decades ago, when women were offered a chance at one-third partnership in the Panchayati Raj system in Madhya Pradesh, several promises were made to them but the underlying assumption appeared to be that male members would continue to dominate the system indirectly in spite of reservations for women who were likely to be mere puppets. In further strengthening of this notion, a new concept emerged, aptly captured by the freely coined term, "Sarpanch-Husband".

Since then, reservations for women have been increased to fifty per cent. But it is necessary to examine whether real efforts have been made so far to enhance real empowerment of women and whether they have reached meaningful heights within the system.

Although the previous Panchayati elections were held nearly two years ago, data on it is not available at any single point, and so, it is not possible to directly conclude the actual present weightage of women in politics. To find out, I started probing the matter by compiling data received from the department of Panchayati Raj and the Election Commission. Examination and analysis of the same yielded many surprising and happy results.

First and most important, it is clear that these women sarpanchs and panchs have not only established themselves as important and effective leaders in the Panchayati Raj over these years, but have also been successful in subverting male dominance and its symbols in many cases. They have also successfully transformed the definition of leadership and its language.

If we scan the political journey of these women in the Panchayati Raj system since 1993, we may conclude that they have already played two successful innings so far. The prominent one is that in which women have defeated male contestants even in general seats and in a good number of such seats, thus demolishing the misconception of male political superiority. There are more than six thousand women representatives in the state who have defeated male contestants in general seats despite the fact that in reality, the general seats are wrongly said to be reserved for male members and women candidates are discouraged to contest these.

A second achievement is that the number of women contestants vying for the reserved seats has gradually increased in successive elections. Many young women, from various fields, have contested and won the elections. Many of them in fact contested twice, or even thrice, and won the elections. Some of them have reached Janpad as members or occupied the seat of district chairman. As a combined force, they have changed the political scene in the state, the style of working and functioning of the system, and thus established the reality that women can make better leaders than their male counterparts.

Data compiled shows that in the panchayat elections, which is the first rung in the ladder of politics, a total of 396,000 representatives were elected, out of whom 205,000 are women. More than half of these women belong to tribal or downtrodden and backward communities. One Sarpanch in Madhya Pradesh represents 1695 persons and thus nearly 12,000 women Sarpanchs across the state represent well over two crore people.

Women have also scaled the higher levels of the Panchayati Raj system: there are 30 women among the 50 district panchayat chairmen, so that 60 percent of the chairmen are women.

The fact is that women representatives give more attention to issues that matter to the electorate, such as water, old age pension and distribution of ration. This is the reason that they have proved that they can do better and are worthy representatives of the people. These qualities in women have also triggered the development of a new and vibrant leadership, with evolving and effective approaches towards development. 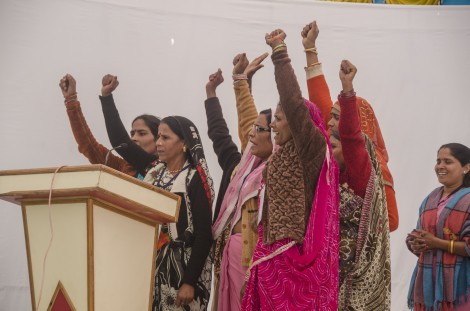 Stories from the field

Munni Saket is Sarpanch of Maronha in Satna district. Says she, "The panchayat was earlier dominated by persons of higher castes and so our grievances were not attended. Once when my request for a ration card was turned down, I thought of becoming Sarpanch. When elections were held, there were many contestants but it was I who won."

Munni's victory is even more important from the perspective that while the social system forbids women to enter or engage in politics, her win was largely the result of the support of those belonging to her class. She got women of her ilk to include their names in the voters' list and strengthened her electoral field. Munni is proud of these people who provided her the opportunity to prove herself. Now, other women like Munni are realizing the change that she has been able to effect.

Similarly, Kusumbai of Mauhara panchayat of Rewa district who became a Sarpanch after being a panch has understood the number game of elections She reveals that how they have elected a Panchayat where nine women have been elected as Panch in a total of 16 seats.

Shyama Bai is a tribal woman Sarpanch of Posta panchayat in Sidhi district. Her story is even more interesting: when the elections were notified, she sold out her goats, got pamphlets printed and distributed in her favour, brought in several persons by tractors to support her and got her nomination filed for the post of Sarpanch. It was a hotly contested election but she prevailed and won the seat. The election of this tribal woman on an otherwise general seat reserved for women and that too by such a huge majority augurs well for women leaders.

Beti Chowdhary has been elected Sarpanch of Devgaan Kala in Rewa district. She gets the panchayat office opened in time and remains present herself for nearly eight hours. Beti started the tradition of listening to the problems of the deprived classes. She has dedicated herself to working for those at the margins and is convinced that addressing their real issues will ensure her return to the position. Similar is the case of Fundibai, the tribal woman in Saarangipanchayat of Jhabua district. Her panchayat has twenty wards but this veteran tribal woman has contested thrice in the last one and half decades and been elected twice as Sarpanch.

Shivakali Bai, the Sarpanch of Khapapanchayat has contested elections four times successfully and on the fourth time, has been elected as member of the district panchayat. She has proved, whether in development or in earning fame and stature in politics, women from the deprived classes are not weak anymore.

Women from such tribes and classes freely move around today in the agricultural fields, markets, etc. without veils or any restrictions. The more their suppression earlier by people of higher castes, the more resilient and fearless have they become. I personally talked to many women leaders in the Panchayats who said that they did not get cowed down by overbearing persons or officials. Many women sarpanchs say that when they talk to government officers, they do it in groups and not alone so that they are not perceived as being weak. It also provides them security, protection and courage.

It is evident that women in Madhya Pradesh are now the real face of the Panchayati Raj. Gradually, as the reins of leadership are transferred from male hands to women's, grassroots leadership itself is acquiring new meaning and definitions.

Shirish Khare is a senior correspondent for Tehelka Magazine based in Bhopal.

URL for this article
http://indiatogether.org/wsarp-government