MINING IN ODISHA
A battle that hasn’t been won in nine years
With numerous court cases, regulatory rulings and pending environmental clearances behind it, the South Korean steel major POSCO still persists with its plans in India. Kanchi Kohli looks at the latest in the case and wonders why.
05 May 2014 -

It is almost nine years since the South Korean Pohang Steel Company (POSCO) signed a Memorandum of Understanding (MoU) with the Government of Odisha. In that agreement signed on 22 May 2005, Odisha had committed that it would facilitate various approvals for setting up a steel plant, captive power plant, port and many other ancillary activities for the company. It had also assured the company that it would keep the area free of encumbrances.

POSCO’s efforts to roll out operations in the country have met with stiff on-the-ground resistance, legal tussles related to environmental approvals and grant of leases, as well as setting up of multiple administrative review committees to assess the project’s impacts. It is now a publicly known fact that the project has been closely monitored by the Prime Minister’s Office (PMO) on the one hand, and has faced one of the most long-standing local oppositions in recent times.

However even without going into details of all of the above, it is a revealing exercise to look at the regulatory issues that POSCO’s steel plant and captive port still need to deal with, and to understand the status and impact of the mining component of the project. All of these continue to engulf POSCO’s future in India.

The 2007 Environment Clearance (EC) for POSCO’s captive port was valid for only five years, which expired in May 2012. The revalidation for the project was last considered by the Expert Appraisal Committee (EAC) of the Ministry of Environment and Forest (MoEF) on Building Construction, Coastal Regulation Zone (CRZ), Infrastructure Development and Miscellaneous projects in a meeting held on 4-5 June 2012. Back then the EAC had requested certain additional documents and submissions from POSCO in this regard. This is clearly reflected in the minutes of this meeting.

On 23 December 2013, I received a Right to Information (RTI) response from the MoEF that the environment clearance for POSCO’s captive port is pending final approval. The Deputy Director (IA-III) stated that "The revalidation of the EC/CRZ was considered in the EAC in June 2012 and the committee sought additional information and the same is yet to be submitted by the project proponent."

At the least, this brings out the fact that the EC for POSCO’s captive port is still pending. But more critically it invokes a very crucial clause issued through an office memorandum (OM) of the MoEF, under the Environment Impact Assessment (EIA) notification, 2006.

In the latter issued on 30 June 2012, the Director, Impact Assessment Division had directed that "all projects where additional information desired has not been submitted even after 6 months of the Expert Appraisal Committee (EAC) meeting should be de-listed from the list of pending projects.”

Even if one were to go by the December 2013 RTI response from the MoEF, it is clear that POSCO had not submitted the information sought in June 2012 -- that is, for over a period of at least 17 months. Publicly available information indicates that this information has still not been provided. The issue was brought to the notice of the MoEF in February 2014, but no action has been taken so far. 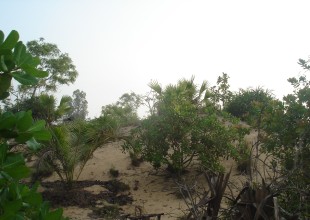 Just as for its port project, the 2007 environment clearance for approval of POSCO’s steel plant also expired in July 2012. With the NGT having suspended the approval dated 31 January 2011, the project was left with no environmental approval.

However, unlike the captive port where the environment clearance revalidation is still pending, the steel plant got a go-ahead on 7 January 2014. The current minister of environment, Veerappa Moily, ordered the delinking of this project from all other components and gave a go-ahead.

One of the central issues raised from the time of the public hearing has been that POSCO has proposed to set up several different kinds of projects which are interlinked or integrated, and has yet gone around commissioning separate EIAs and approvals. This was one important observation made by the National Green Tribunal (NGT) back in 2012 when the steel plant and port’s environmental clearances (both 2007 and 2011) were legally challenged.

While suspending the 2011 approvals and asking for a fresh review, the NGT in its judgment dated 30 March 2012 observed that (not only in this case, but in every case) project developers need to "apply for a single EC alone if it involves components that are an essential part of the main industry.” The NGT in its judgment went on to specifically cite the fact that this project includes both a steel plant and a port (as well as a "captive power plant, residential complex, water supply, etc.").

This issue of delinking projects has also been recognised and addressed by the MoEF on a general note. The office memorandum of the MoEF of 24 December 2010 clearly states that “integrated and inter-linked projects having multi sectoral components shall prepare a common EIA report, covering impact of each of the components in a comprehensive manner after obtaining TORs (Terms of Reference) from each of the respective sectoral Expert Appraisal Committees (EACs).”

Despite the knowledge of this circular and the observations of the NGT, the EAC and MoEF did not insist on the common EIA especially after the validity of 2007 approval had expired. The revalidation process should have asked for a comprehensive assessment of the project, fresh baseline information and a complete review of all the components of the project. Instead, the project components were delinked and steel plant was granted approval.

The revalidated approval of the steel plant and captive power plant have now been challenged before the National Green Tribunal and notices were issued by the NGT on 21 April 2014 to all parties. The next hearing is on 20 May 2014.

According to recent news reports, the government of Odisha is yet to send a reply to the Ministry of Mines on whether the prospecting licence for the captive iron ore mine at Khandadhar should be granted to POSCO or not. Now, the company has reportedly written to the Cabinet Secretariat’s Project Monitoring Group (PMG) over the delay in issuance of the licence by the State Government.

If the prospecting licence is granted, POSCO will then seek separate approvals for the mine as well as environmental approvals. This is yet another instance where an integral component of the project has been delinked and pursued separately. When the Central Empowered Committee (CEC) of the Supreme Court’s forest bench was looking into the issue of forest diversion for POSCO, they had clearly observed that mining should not be delinked -- a directive which no regulatory process has considered so far.

There is already growing evidence of the detrimental impact that mining operations will have in Khandadhar and organisations are gearing up to contest the mining operations there. In a letter written to the National Advisory Council (NAC), copies of which were shared with the ministers of environment and tribal affairs back in March 2013, several concerns have been pointed out regarding the likely irreparable impacts of mining in Khandadhar.

One of the core issues raised in that letter is that of the Khandadhar watershed and forests are sacred to the Pauri Bhuiyan, a community listed as a Particularly Vulnerable Tribal Group (PVTG). Their deity, Kandh Kumari resides on the mountaintop - evoking a situation similar to that of bauxite mining in the Niyamgiri Hills of Odisha, where mining has been restricted.

Other than this, the wildlife and biodiversity importance of the Khandadhar hills, the existence of an important elephant corridor in the region, will be crucial aspects to deal with when POSCO’s mining proposal in Khandadhar is considered. All of these have already been put on record with the decisive agencies looking at the environmental approvals related to such projects.

Nine long years of POSCO is not just a story of legal and regulatory failures. It is also not about people constantly seeking remedies at various administrative and judicial forums they have the ability to reach. It is the story of a people who have waged a relentless struggle to save their livelihoods and of others who gave in first and are now stuck after having left their villages.

It is a narrative that shows how the government has continued to favour a company which has shown non-adherence to the country’s environmental laws and social safeguards. POSCO, the fact remains, is still in India.

8. Niyamgiri gets some time to breathe

The author is a member, Kalpavriksh environment action group and is based in New Delhi.

URL for this article
http://indiatogether.org/why-is-posco-still-in-india-environment