ELECTIONS IN KERALA
Will the Western Ghats decide Kerala’s mandate?
The controversy over the Gadgil and Kasturirangan reports on ecological preservation in the Western Ghats has brought about a churn in politics in Kerala. P N Venugopal wonders if this will determine the decisions of the electorate in the Lok Sabha elections.
09 April 2014 -

In the 2009 general elections to the Parliament, the United Democratic Front (UDF), led by the Congress party in Kerala, had won 16 seats of which 14 went to the Congress. In the run up to the 2014 elections, the party high command allowed all the sitting MPs to be candidates, except one. The one MP who was denied a second term was P T Thomas, who had represented the Idukki constituency in the Western Ghats. The reason: he was one of the very few politicians in the state who opposed the Kasturirangan-report agitation and who had also argued for the implementation of the Madhav Gadgil Report.

At the other end of the state spectrum, we have the Left Democratic Front, which has not put up a candidate of its own  but is supporting Adv. Joice George, fielded by the High Range Protection Council, which spearheads the agitation against the implementation of the Western Ghats reports, alleging that it would displace people living in the high range areas and impact their livelihoods.

These two turns of events sum up to a large extent the impact of the Western Ghats reports in the impending elections in Kerala: consternation in the UDF camp and confusion in the LDF camp.

The Church and the communists in Kerala have always remained at opposite extremes in almost all matters of political or sociological importance. This time, perhaps, the latter is viewing the developments around the Western Ghats as an opportunity to forge a new ‘issue-based’ relationship with the Christian religious hierarchy which has a great say in the political proclivities of its followers. The church along with the ‘Kerala Congress’ – a political party dedicated to safeguarding the interests of the farmers – has  always championed the cause of the ‘settlers’ in the Western Ghats.

The Kerala Congress went to the extent of flirting with the LDF on the issue of the Kasturirangan panel recommendations, but finally chose to continue with the UDF and pile pressure on them for mitigating the perceived hardships on the settlers in case the panel report is implemented in entirety.

Quarrying has been at the centre of all discussions regarding the Ghat reports. Quarrying is rampant in the Western Ghats, especially because permission is not required for mining from quarries with less than one hectare area. It is alleged that the quarrying lobby played a major role in the violent agitations against the implementation of the Kasturirangan report. In any case, it is quite obvious that diverse interests are at work.

In March 2010, Jayaram Ramesh, then union minister for Environment, appointed a panel of experts headed by Madhav Gadgil for studying the ecological and environmental issues that were responsible for the continuing erosion of Western Ghats and for recommendations for the preservation of its delicate ecological diversity.

Madhav Gadgil submitted his report in mid-2011. However, by that time Jayaram Ramesh had been shunted out and the ministry sat on the report, not even releasing it in the public domain for discussions. When the court intervened and the report was released, environmentalists all over the country welcomed it wholeheartedly. However, the government set up the Kasturirangan committee to suggest the methodology to be adopted for implementing the Gadgil report.

But the Kasturirangan committee chose to ignore this mandate and instead, presented an altogether new report with substantial difference in approach and therefore in its content, provoking charges of gross dilution from ecologists. The Gadgil committee had identified the entire Western Ghats - an expanse of 1,37000 hectares - as an Eco Sensitive Zone (ESZ), but with three classifications based on present land use and ecology. 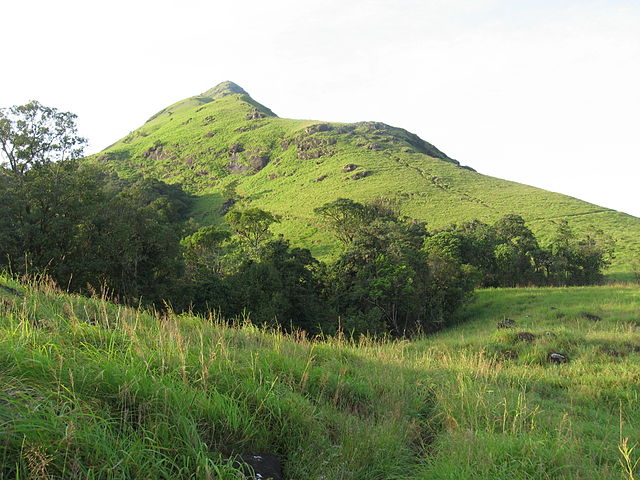 The highest peak in the Wayanad hill ranges of the Western Ghats in Kerala. Pic: Wikimedia

The Kasturi panel removed human settlements, farm lands and cash crop plantations, limiting the ESZ to merely 60,000 hectares. However the major and vital difference between the recommendations of the two panels was that of self-determination.

Gadgil wanted his report to be circulated and studied at the grass roots level. Each local body was given the power to discuss and determine for itself the category of ESZ to which its area belonged, based broadly on the criteria laid down in the report. But no such provision of self-determination is available in the Kasturi panel recommendations.This led to it being imposed from the top and the consequent discontent, uncertainties and apprehensions.

The sloth with which the Gadgil panel recommendations were dealt with and the haste with which the Kasturi panel recommendations were tried to be implemented have both boomeranged. The victim in all of this, unfortunately, has been the Western Ghats. It is quite obvious that all those who have direct stake in the Ghats – namely, a majority of the people who live there, who have invested there, the politicians, the church – want status quo to be maintained without any interference from any quarters.

None of these stakeholders seem to have studied these reports with diligence; instead, passion has been whipped up with rhetorical questions like ‘man or nature- priority for whom?’ Also forgotten in the frenzy is that the preservation of natural landscapes is vital to the entire geographical area and not just to the local and financial stake holders.

Apart from the Idukki constituency, Wayanad, Kozhikode and Vadakara constituencies have a sizable settlers’ population and are also affected by the Ghat reports. On 13 November 2013, the Ministry of Environment and Forests (MoEF) issued an Office Memorandum declaring 123 villages in the state Ecologically Sensitive Areas (ESAs). The high ranges erupted in protest against the fiat.

Violent agitations spread and the LDF called for a state-wide hartal. The High Range Protection Council, backed by the church, organized a 48-hour blockade in Idukki. The state government appointed an expert panel headed by Oommen V Oommen to study the implementation of the Kasturirangan Committee and the panel recommended the exemption of 3,247.85 sq km from the ESA based on the consideration that they were either under cultivation or under human habitation.

As a result of the immense political pressure by the UDF leaders including the chief minister in the face of state-wide disruptions, on 10 March 2014, the MoEF issued a draft notification, accepting the trimming of the ESA by the state government. The draft notification doused the agitations to a large extent and the state tuned in fully into election mode.

However, there was widespread apprehension that the Office Memorandum dated 13 November still holds good and that a draft notification cannot alter the legal implications of the memorandum. A large segment of the church supports this line of thought and this is reflected in the candidature of Joice George, who is the secretary of the High Range Protection Council.

This perception was reinforced when the central government averred in the Green Tribunal on 24 March that the Office Memorandum of November 13 is indeed valid as on date. Adv K Venugopal made this submission during the hearing of a petition filed by the Goa Foundation which sought the implementation of the Gadgil committee report instead of the Kasturirangan report.

The Goa Foundation raised objections to the draft notification and termed it politically motivated and published in haste, just before the elections, so as to gain political mileage. The Tribunal ordered that since the central government has clarified that the 13 November order holds good, the Foundation can challenge it if and when the draft notification of March is made final.

The Tribunal order has put the state government and the ruling coalition in a sticky situation. The Tribunal also slammed the Kerala government for pleading for resumption of quarrying of granite.

The CPI(M) had initially pleaded for the implementation of the Gadgil committee recommendations. But by the time its election manifesto was released, it retracted from its position and is now rejecting both the reports, instead promising the formation of a ‘democratic’ panel for yet another set of recommendations.

It is doubtful whether the CPI(M) and the LDF will make worthy gains for the compromises they are making by siding with forces that have been historically antithetical to them. It will also be pretty tough for the traditional vote banks of the church and the UDF to make a dramatic U-turn when it comes to voting decisions, say political observers. But what is most concerning here is that the preservation of the Western Ghats has been relegated to the position of a mere scoring point in the manipulative arena of electoral politics.

URL for this article
http://indiatogether.org/western-ghats-infuence-on-kerala-elections-government