BOOK REVIEW
Meandering an important course
Water and the Laws in India is not always consistent or complete, but this does not detract from its usefulness and importance in examining important issues. Shripad Dharmadhikary reviews the book.
26 January 2010 -

T N Narasimhan, geologist and scientist, writing in Water and the Laws in India, says that "A legal framework for water ... must give due consideration to the attributes of water resources ..." He describes some of them thus: "Considering that water availability is limited, variable, uncertain and subject to natural phenomena beyond human control, the goal of water management is to achieve a reasonably stable availability of water; assuring equitable distribution among all citizens; [and] integrity of water resource systems for future generations." Later in the essay he adds, "It includes the task of providing water to satisfy the needs of the environment, ecosystems and flora and fauna ..."

Indeed, the breadth of intervention needed is so vast that it is a hugely complex task to develop a legal framework that will encourage and facilitate such decision making and management related to water resources in India. Water and the Laws in India takes up the challenge of detailing what the contours of such a legal regime should be.

The book seeks to meet this challenge through an innovative approach. It eschews the standard path of presenting the existing legal framework, then a critique followed by suggestions and recommendation for change. Instead, it presents papers on various issues and concerns related to water resources, and looks at existing laws in the context of these issues. Suggestions for reforms also emerge from the discussion of how to address the problems. That, as Ramaswamy Iyer, former Secretary, Ministry of Water Resources, Government of India, and editor of the volume says, "explains the title of the book Water and the Laws in India - and not the Water Laws in India."

In taking this approach further, the book is not written by a select few authors, but consists of many different papers written by different authors. The authors include lawyers, academics, former civil servants, social and environmental activists, researchers etc., all of them distinguished and well known.

There are 20 contributed papers divided into six broad themes or parts. The first part is a preliminary overview, followed by Federalism, Some Major Legal Themes, Some Major Problems, Augmenting Water and Water Law Reform. Each part contains several papers. Between them, most of the key issues related to the water sector are covered. These include the highly contentious inter-state water disputes, riparianism, ownership of water, water and women, floods, water pollution and contamination and groundwater. The part on Augmenting Water discusses large dams and looks in detail at the environmental decision-making process, the EIA regime, and displacement and rehabilitation of the people affected by large projects. 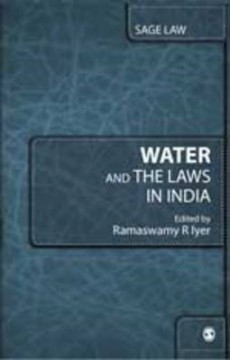 The first message from the book is that the existing legal framework is highly inadequate, limiting and even detrimental to sound water resource management.

The part on Water Law Reforms discusses the extensive restructuring of the water sector currently under-way in most of the country under the World Bank and Asian Development Bank sponsored "reforms". In the last Part, Ramaswamy Iyer, as the editor, attempts a "Synoptic Survey" to draw together the various threads from the individual papers.

The contribution by so many distinguished writers, with many papers being of outstanding quality, is the major strength of the book. This is supported by the excellent pulling together at the end by Iyer, though he is careful to caution us that this "summing up" is not a "synthesis" and does not represent any "consensus".

As Iyer mentions in his summing up, there are three major messages from the book, in the sense of a largely shared understanding emerging from the papers. The first is that the existing legal framework is highly inadequate, limiting and even detrimental to sound water resource management. Second, the "Public Trust" doctrine should form the foundation of water law regime - i.e. we must acknowledge that certain things identified as common resources should be freely available to everyone, irrespective of their status in life; these are of such great importance to people as a whole that they cannot be held privately; and that the state also holds them only as a trustee for the people. (in the words of T N Puthucherril, Riparianism in Indian Water Jurisprudence, in this book). The third important message is the need to bring to centre stage the "people" as against the "state".

One of the most tangible and important contributions of the book is its general and specific recommendations for changing or reforming the legal regime made in most of the chapters.

Individual chapters also offer a host of insights into issues like equitable and sustainable use of water, decision-making, roles of the centre, states and panchayati raj institutions, whether water should be placed in the concurrent list, water rights, privatisation etc. Some other important issues dealt with are the interface of water with other resources like land and forests and the implications for laws of this (Community Engagement in Water Governance, M S Vani), and the need for the science component and a human component as a basis for water laws, to take cognisance of the hydrological cycle, nutrient cycle and erosional cycle in devising the legal regime (papers by T N Narsimhan and M S Vani).

The paper by DHAN Foundation (Indian Laws and Acts on Traditional Tank Irrigation Systems) presents a very interesting study of how modern laws interface with customary laws. The extensive networks of traditional tanks in Tamilnadu have been governed by equally intricately developed customary laws. These tanks have been playing a major role in providing water for irrigation and other needs in large areas. The case studies presented by DHAN Foundation show that often, communities have had to struggle and engage in legal battles to ensure management of the tanks through customary rights.

However, the very strengths of the book - that it consists of papers from many different authors - also bring some limitations. These are acknowledged by Ramaswamy Iyer in the Preface - that such a book cannot be expected to have a single sustained theme running through it, and that one cannot expect an identity of views amongst authors. By itself, this is not too big a price to pay for obtaining a diversity of views from experts in their own areas. However, there are some other consequences of this structure.

One is that the treatment of various issues is uneven. Authors focus on certain aspects of an issue, and not on others, and discussions on various aspects of the same issue are dispersed at different places in the book. So sometimes, while we have very interesting but separate analysis of different aspects, they do not emerge together on a comprehensive canvas. Some papers directly contradict each other. For example, discussing the environmental decision making laws and the EIA framework, Kanchi Kohli and Manju Menon (Environmental Decision Making in India) call the new EIA notification of 2006 "retrograde" (an opinion I fully agree with). On the other hand, Shyam Divan (The Contours of EIA in India) says that "The September 2006 notification substantially altered and strengthened the EIA procedure."

In a few areas, the issues, concerns and arguments presented in the book are well known and have been around for last many years. The book needed to present them, but then should have moved beyond them, searching new ground. For example, for last couple of decades, there has been a powerful argument in public discourse that water is a local and decentralised resource, so the legal frameworks need to enable decision-making and management at the local level. Several authors in the book also press for this. On the other hand, water is also a non-local, and a highly interconnected resource. The smallest stream or a watershed is linked to the mighty river.

A critical issue, therefore, is how to devise legal regimes to enable decentralised decision making, at the same time safeguard the interconnectedness and ensure the rights of the others parts of the same system. This aspect is now one of the key challenges - one can say that is a frontier issue - and it would have been important for the book to focus more attention on this.

There are other places where one wishes the editor had prompted the authors to explore or elucidate further. One particular instance deserves mention here. The jurist and lawyer Fali Nariman in his paper Interstate Water Disputes: A Nightmare contrasts the building of India's Sardar Sarovar Narmada project (SSP) with China's Three Gorges projects.

Noting how the SSP is only now, after years of disruptions been permitted to go ahead, he says it is a "price we must pay for a vibrant, through fractious democracy... One of the great challenges to our democracy is that we could not possibly undertake in the future anything as grandiose as the Three Gorges Project ... because this would involve enormous sacrifices in the present for a relatively small group of people. This is because of our emphasis on individual citizen's rights ... Too much emphasis on rights serves only to divide and fragment society and spread discontent".

It is not clear what exactly Nariman wants to suggest and whether he wants India to resort to the Chinese way of carrying out such projects. However, given his eminence, and his clear articulation that the Three Gorges is "beneficial in the long run", and that many proponents of large dams have been expressing their impatience at the opposition to such project in India, often arguing for learning from China in these matter, it would have been useful for the editor to request Nariman to develop his arguments further and explicitly.

However, these do not in any way detract from the usefulness and importance of the book. A review such as this cannot do justice to the many issues dealt by the book and the many insights offered. One can only urge the readers of this review to read the book and discover these for themselves. For, the book offers the studied reflections of experienced and distinguished authors in a unique compilation of the key issues in water sector with extensive recommendations for reforming the legal regime around water in India. For that reason, it deserves the attention of all those interested in water, and law.

Shripad Dharmadhikary coordinates the Manthan Adhyanan Kendra, a centre set up to research, analyse and monitor water and energy issues. "Water and the Laws in India" is edited by Ramaswamy Iyer, and published by Sage Publications, New Delhi. (670 pp., Rs/995)

URL for this article
http://indiatogether.org/waterlaws-reviews