Putting away the toxic spray
Farmers in Andhra Pradesh's Warangal district are doing the math, and learning that the chemistry that kills their pests is taking its toll on them as well. Ramesh Menon reports.
01 June 2004 -

Vadagam Malliah, a farmer in Perukavedu village in Warangal district of Andhra Pradesh, sits lazily on a culvert watching people go by. He used to be very busy until last year toiling in his farm spraying pesticide numerous times a year on his cotton crop. Last year, he had sprayed ten times in the short span of four months in his desperation to drive away the American bollworm. But this year, he has not sprayed even once as his health has deteriorated. His eyes burned, he got splitting headaches, he felt weaker by the day, he lost appetite and a feeling of sluggishness had overtaken his life. This was his wake up call. He figured out that it was the pesticides that were doing this to him; he saw numerous farmers like him suffer from the same symptoms. This year, he chose to hire a labourer paying him Rs.60 a day to spray his cotton and chilli farms.

Farmers who can afford it are making the same choice.

Akula Narayana, a farmer from Ragannagudem village in Raiparthy Mandal of Warangal remembers how after sprinkling pesticide powder on his cotton crop, he violently vomited, fell giddy and lost consciousness. That was it. He just called a halt to all chemical farming. Anyway, the pests were not dying even after we used all that poison. So how does it matter? Now, I just let it be. Some of the crop does get destroyed, but it will not kill me, he says. 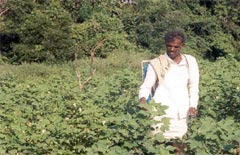 Picture: An organic farmer sprays bio-pesticide on his crop.

On an average, a farmer cultivating cotton gains Rs 2,800 to Rs. 4,050 per hectare; that makes it an attractive proposition. Down the years, farmers who grew paddy shifted to cotton. As they got into the spiral of indiscriminate pesticide use, the pests became resistant. Pesticides are very expensive and so farmers take loans to buy it. Pesticide dealers gladly gave them credit to buy this. But their crops failed as the pests had become immune, and the debts kept piling up. Many had to sell off their farms to avoid being humiliated by the moneylender. Some others just committed suicide.

One of them was Kandi Sailu. In his mid forties he had to sell off three of his seven acres of land to handle some of the debts. But as he grew cotton, he needed more pesticides and pawned his wife Bhadramma's jewellery apart from taking loans of Rs. 95,000 from various sources. Ashamed at being unable to repay, he left one morning for his farm and hung himself from a tree. His family lives in penury now.

Warangal district itself has over 13,000 pesticide retailers. Pesticides worth over Rs. 700 million rupees are sold annually in this one district alone. It has many pesticide salesman who have been abroad to enjoy a company paid vacation as they exceeded targets. S. Narasaiah, a sales officer for a pesticide company brushes it off saying that nowadays, pesticide companies want to actually educate the farmer on good practices and proper use of pesticides.

Pesticides worth over Rs. 700 million rupees are sold annually in this one district alone. It has many pesticide salesman who have been abroad to enjoy a company paid vacation as they exceeded targets.

•  Slow poisoning of Punjab
•  A ray of hope in Nasik

But the harsh truth is that farmers solicit free advice from pesticide dealers and salesman on what pesticide to use and in what quantity. This has basically happened as the agricultural extension officer who should be actually doing the rounds in the villages advising them is just not there. The earlier TDP government in Andhra, carried away by former chief minister Chandrababu Naidu's penchant for computers, hired computer graduates as agriculture extension officers. These fresh graduates took these ill paid jobs as they were jobless and not because they wanted to work in rural Andhra with farmers.

Jalapati Rao, Scientist, Agriculture Research Station in Warangal says farmers are also to blame as they are using very harmful cocktails of pesticides presuming that it would be more effective. Most of the pesticides used in Warangal are just not required, he adds.

Every village has some tragic story to tell of a farmer who died spraying pesticide or committed suicide due to debts caused by buying expensive pesticides. There are moving stories of how even years after they have died, these farmers families struggle to stay alive.

Ask Balamma, the widow of Kothala Cheralu who just fell down unconscious in his farm in Konkapaka village after he sprayed pesticide for five hours. He went into a coma and never recovered. He left behind debts of two hundred thousand rupees. The frail widow has managed to pay of one hundred thousand rupees by selling off three of the five acres of land the family owned. She struggles from day to day in her one room house trying to keep the kitchen fire burning. Her son no more wants to farm and tried to find work on a daily basis.

After a great deal of persuasion, 530 farmers in 14 villages in Parvatagiri block of Warangal district have moved into organic farming. The persuasion came from a NGO called Modern Architects of Rural India (MARI) based in Warangal. What MARI did was to introduce them to what it calls non-pesticide management.

One of them is Tukia Modu from Sathya Tanda village in Warangal that grows cotton, groundnut, red gram and paddy on five acres. He does not use any pesticide and controls pests using traditional methods like attracting birds to eat the pests. He has actually stuck in tree branches on his farm so that birds can come and perch on it. When they do, they see the pests and make a feast of them. He also uses light traps where the insects get attracted to a bright bulb at night. Below the light, is a pail of water mixed with kerosene. The pests fall into the watery grave every night. He also uses pheromone traps where male insects get attracted by the scent of its female species. But when it comes into the trap, it finds there are no female insects, only a scent lingering in the trap. The next day, Modu collects the insects and kills them. Earlier, I almost lived with the pesticide sprayer. I am glad I moved back to nature, he says.

The approach of MARI to the problem is to encourage farmers to use traditional seeds as it is more pest-resistant, inter-cropping as pests that attack one crop die when another crop comes up, bio-pesticides like neem and decoctions like chilli-garlic and tobacco and even create a virus that will attack the pest, make them sick and kill them.

Farmers are also moving away from cotton to other crops like maize, pigeon pea, green gram and groundnut. It is another simple solution to get rid of the American bollworm that earlier had bored a hole in their finances. MARIs secretary, R. Murali feels that a pesticide free village is no dream; it is possible. Farmers just need to be motivated and shown an alternate path.

I travelled to various parts of India in Punjab, Maharashtra and Andhra Pradesh to understand the extent of poisoning by pesticides. It was really frightening. But while millions of rupees were being blown up on pesticides, it was really heartening to note that everywhere there were farmers who were slowly making the transition to organic farming. In some cases, it was because they saw the damage it was doing to their health and in some cases it was because it was seriously affecting their economics. Pesticides were very expensive and they could not let their debts pile anymore. Organic farming was far more pragmatic and better in the longer run.

In areas like Bhatinda in Punjab, it was an uphill task for activists to push the organic agenda as farmers were sharply focussed on their returns and not on their health. They believed that sooner or later the pests would die, and the risks to their health would be minimal. But now, they are seeing a huge spurt of cancer cases in their villages, as well as new health concerns like infertility. Religious leaders can play a role in changing their minds, as I learned in Nasik. Over 600 farmers there in just one district have moved to organic farming, thanks to the late Pandurang Shastri Athvale who motivated them to shun poison as it would affect generations to come.

In Warangal, the movement is slowly spreading from village to village as farmers see the benefits of organic farming in small pockets. Clearly, it will take time, but the change is blowing in the air. To keep the tempo alive, volunteers S.R. Srinivas and B. Giribabu move from village to village-singing songs motivating farmers to use natural methods to control pests and say goodbye to poison. They, like Murali, know that this journey is going to take them a long time, but they also know that farmers must be encouraged to change - before the choices that are killing their crops turn to killing them too.

URL for this article
http://indiatogether.org/warangal-environment