Water : the hidden export
When water intensive commercial crops are grown in water scarce areas and the produce exported, it amounts to a virtual export of water, even as water availability becomes scarcer. The virtual water concept must be considered seriously in India, asserts Shama Perveen.
01 August 2004 -

What do countries like Morocco, Jordan, Israel and Egypt have in common? Seems difficult  maybe not, if one hints that water is the topic being discussed. Middle East and water  the combination instantly gives away the answer. These are all water scarce countries.

But it is not this commonality in their problem; rather it is the novelty in their approach to tackle freshwater crisis, which is worth mentioning. Although water is abundant in nature, fresh water amounts to less than 1% of the earths water resources. This tiny fraction nonetheless, constitutes the basic available supply utilized by humanity either for domestic, agricultural or industrial needs. The concept of virtual water has allowed these nations to share the benefits arising out of water use rather than sharing the real water itself. 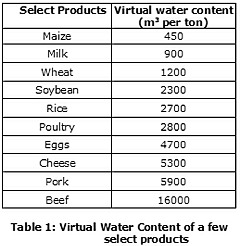 Defined as the volume of water required to produce a commodity or service, the concept of virtual water (VW) is seen to be of immense relevance for water scarce countries. When you consume one kilo of grain, you are in effect also consuming the one thousand liters of water needed to grow that grain; when you consume one kilo of beef, you are consuming the 16,000 liters of water needed to produce that amount of meat. This is the hidden or virtual water, explains Daniel Zimmer, Director of the World Water Council.

Some 70% of the total amount of water utilised by human beings, go into food production. Water is hence considered an important variable in controlling the dynamics of food security situation within a country. Few however, realise that transboundary trade of food items can also help overcome the physical water scarcities in water deficit regions.

For instance, it takes approximately 1,000 tonnes of water to produce 1 tonne of wheat. So, import of one tonne of the cereal, tantamounts to importing 1,000 tonnes of water in a virtual sense. This is especially favourable, if the importing region is water scarce and water intensive crops (needing high amount of water to grow) are being imported. This transaction relieves the stress of finding and using huge quantities of freshwater domestically to produce the crop. The water so saved, can be effectively reallocated for more productive and profitable uses elsewhere.

Says William J. Cosgrove, President of the World Water Council, Unconsciously, through food imports, many water-scarce countries have already eased tensions over their water problems, so that virtual water imports are already playing a role. Israel and Jordan have actually formulated policies to reduce or abandon the export of water-intensive products. Where exports do occur it is largely limited to crops that yield relatively high income per cubic metre of water consumed. As a result, almost 60 to 90% of Jordans domestic water is imported through trade in VW. According to a study done in the Middle East, the flow of VW in the region through grain imports is so large that it equals the annual flow of river Nile!

A large percentage of India's freshwater goes into our agricultural production. Besides, water intensive commercial crops are largely grown in arid areas or areas where freshwater availability is comparatively less. Exported food products thus, inevitably ships out large amounts of precious water resource also from the region. The already scarce water resource, consequently, becomes even scarcer. An understanding then, of the contents of VW in traded products would help give more insight into the water, food and trade triplet in economies, which have grossly unequal share of freshwater availabilities. The concept of VW then emerges as a potential means in sharpening the public discourse and alleviating regional and national freshwater scarcities. The invisible hand so extended by VW trade then appears to be of vital political and ecological significance. During the period 1995-99, globally dominant VW exporters were USA, Canada, Thailand, Argentina, India and France. Countries with large net VW imports were Sri Lanka, Japan, Netherlands, China, South Korea and Germany. (See Figure below) 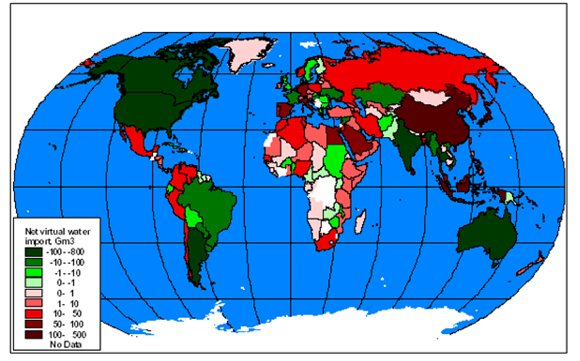 The concept of VW brings into focus another notable and rather knotty issue of the linkage between our dietary pattern and water resources available to us. Call it oblivion or ignorance - most of us are still unaware of the linkages between our dietary pattern and water consumption. Table 2 fairly gives an idea of the relationship between the two in quantification terms. It is based on research undertaken by Daniel Renault of Food and Agricultural Organisation of the United Nations and Wesley Wallendar of the University of California, in the year 2000. It shows that a transition from a total non-vegetarian to a vegetarian menu would mean a per-capita saving of 2.8 cubic metre of water. The comparison clearly lays bare the virtues of a vegetarian diet, so long as conservation of freshwater is concerned.

Nonetheless, within the scenario of improving situation of quality of life and varied culinary demands of the affluent class, this may sound bizarre. A benign changeover from the western style diet to a vegetarian diet, it is argued, cannot be brought about unilaterally without affecting the development process of an economy.

As one juggles with the viability of this proposed changeover in diets and of the potential of VW trade in alleviating the regional freshwater crises, the negative fallouts are also seemingly obvious. Over-reliance on lower trophic chain components for food; indiscriminate exploitation of exporting countries water resources to capitalise on the enhanced trade opening; increased abstraction upstream of a river basin leading to more conflicts; dependence of importing regions on food exports from other countries and so on.

For low-income countries like India, the low GNP rate might be one crucial bottleneck in a VW implementation process. This is because food imports -- to save precious water internally -- on a continued basis would be a problem if a country has a low GNP as well. Depending on the socio-economic condition of countries then, food imports would not be as lucrative after a certain period of time. Moreover, in view of lack of available country and region specific study on the actual cost benefit scenario of VW imports/exports vis-à-vis domestic production of water intensive crops using scarce water resources (which is a public good) - the conjecture itself stands undebated.

Conversely however, India has recently conceived of a gargantuan scheme to interlink its major rivers, costing a thumping financial outlay of US $200 bn. In the case of China and South Africa, experts elsewhere have already demonstrated that virtual water trade is a more realistic, sustainable and environmentally friendly alternative against more expensive inter basin water transfer schemes.

Rather than an outright denial of the concept of VW as being fanciful and philosophical, its inherent potential needs to be appreciated and comprehensively evaluated.  •  Stopping virtual water trade

Tony Allan of the School of Oriental and African Studies, London and one of the pioneering champions in forwarding the concept of VW, firmly asserts that the total amount of water made available through the use of virtual water and artificial processes (like desalination) can be very powerful concepts. He says, Through the use of these, water deficit economies and water deficit river basins can effectively redress their shortages. For similar reasons, global trade in foodstuffs can be considered as an effective tool for drought mitigation.

Worldover, excessive demands for freshwater exists in regions where water availability is not necessarily high. In response to this spatial and temporal inequity in freshwater distribution, water planners have largely relied on major feats of hydraulic engineering, assuming that the projected shortfalls could be met by taming more of the natural hydrological cycle. Virtual water, on the other hand, can neither be pumped, nor can it be easily valued or accounted. The hidden aspect of this concept is especially vital for water resources practitioners who are not used to thinking outside the box  that changing patterns of trade (in VW) can be a more powerful tool for assuaging water supply problems than costly engineering solutions. Therefore, the possibility of utilising the concept of VW as an economic remedy has until now been subordinated and overwhelmed by the knowledge base that is largely technical ingenuity dominant. Following which, the potential of virtual water has become so contentious that a large section of those actually managing water ensure that the concept for the most part remains outside the normal purview of water policy discourses and decision-making processes.

Widespread intra and interbasin conflicts follow, and most of them remain unresolved. It is hence believed that a realisation of the concept of virtual or embedded water in exported products, would act as a significant deterrent in controlling the misuse, abuse and exploitation of limited water resource. Prof. Allan states, Virtual water is a good example of a solution that lies outside the local watershed in what has been termed a problemshed without a hydrological identity.

According to a recent survey, to produce a 32 megabyte computer chip of 2 grams, 32 kgs of water is required. Similar quantitative research on virtual water content, either in agricultural, industrial or livestock products, have unfortunately been few so far. Following the intensified globalisation process, regional and international trade linkages would undoubtedly become a decisive factor in determining the economic soundness of a country. Says Arjen Hoekstra of the IHE-Delft, People in the USA are not even aware that 1/15 of their available water resources are used for producing crops for export. In Thailand, this is even one quarter!. A background information of VW content in traded items would, to a large extent, help a nation in developing a meaningful policy framework and agenda for action.

Besides, in the light of changing incomes and changing dietary habits, more research in VW contents and trade can help in assessing and determining the relationship between trade, food security and water. To internalise virtual water as a strategic instrument for India, research needs to be carried out on its natural, social, economic, environmental and political implications vis-à-vis existing measures. Rather than an outright denial of the concept of VW as being fanciful and philosophical, its inherent potential needs to be appreciated and comprehensively evaluated. Whatever be the intellectual outcome, the idea as it appears of now, holds tremendous significance in solving the climacteric disposition with respect to freshwater shortage in the coming years.

Shama Perveen is a Researcher at the Centre for Development and Environment Policy, Indian Institute of Management Calcutta. The views expressed in the article is solely of the author and not of the institution she is associated with. A shorter version of this article appeared in The Statesman on July 26, 2004. This feature involves additional clarifications from the author in response to India Together's questions.

URL for this article
http://indiatogether.org/virtwater-environment