WATER AND SOIL CONSERVATION
The root of the solution
Vetiver plants have long been known to provide economical protection against soil and water loss, and more recently they have also been found to be useful for water purification. But while other nations have rapidly embraced it, in India itself its adoption remains rare, finds Shree Padre.
10 May 2006 -

Recently, Kanan Devan Hills Plantations Company (KDHP), one of the country's large tea producers, took an interesting decision. Henceforth, while replanting tea gardens, they will establish vetiver (in Tamil, the word means 'dug up root') hedges in place of stone revetments to conserve soil and moisture. While this didn't receive much attention in our media - which is generally blind to important developments on the farming front - this significant decision should be an eye-opener for us Indians, about one of the many uses of a 'wonder plant' of our own.

The Research and Development department of KDHP, under the leadership of P. Haridas, Deputy General Manager, has been conducting trials on vetiver for the last one and a half decades. He explains, "In the hilly terrains where tea is grown, soil erosion is a big problem. The tea estates established by the British didn't have permanent soil and water conservation measures. As such, during replanting, a lot of expenditure has to be incurred for this. In the past, our company too spent heavily to construct stone walls (revetments) across the slope. Depending on the gradient, normally two or three walls (top, middle and bottom) will be needed. On an average, stone revetments for a hectare of tea garden would require 350 man-days. Instead, 100 man-days would be sufficient if you opt for vetiver hedges."

According to Haridas, KDHP has a replanting programme beginning this year. They hope to cover at least one percent of their total tea area of 8800 hectares. This means, every year, they will have to replant in about 88 hectares. Consider the savings: in replanting one hectare of tea garden, if vetiver hedges are raised in place of stone walls, there will be a savings of 250 man days. Assuming the daily wages is Rs.120, this makes a neat reduction of 30,000 rupees a hectare.

Water and soil conservation at a tea estate through vetiver hedges. (Picture by P Haridas)

How vetiver caught the world's attention in the late eighties, is a very interesting story. In 1987, noting that soil erosion is the most serious agricultural problem in the world, Richard Grimshaw and John Greenfield, two agricultural scientists of the World Bank decided this had to be tackled on war footing. During their visits to different states of India, they chanced upon the solution they were so eagerly looking for in a sleepy village near Gundlupet in Karnataka. The village evokes vivid memories in Grimshaw's mind. "We learnt from these farmers that they have been successfully growing vetiver against soil erosion for centuries. It reduced rainfall runoff by as much as 70%, recharged groundwater (villages that use vetiver have much higher water levels in their wells), and improved ephemeral stream flow."

Subsequent studies prompted the World Bank to launch The Vetiver Network (TVN), which has been disseminating vetiver technology to the world with a missionary zeal. Now there are more than 20 vetiver networks in the world and newer ones are being formed every year. In China alone, vetiver is so popular that the country now has a Chinese Vetiver Network and 6 corporations for the implementation of vetiver systems for environmental protection.

What makes vetiver so popular?

Richard Grimshaw, now President of TVN and John Greenfield have visited India many times and have a clear picture of the farming conditions here. Recalls John Greenfield, "When I was introducing the vetiver system in Kabbinala and other areas, especially down in Karnataka, I introduced it by saying 'We have a technology that can improve your yields by 15-50%, that is permanent, once established, costs nothing and will drought proof your crops'. Then I go on with the explanation of how vetiver hedges conserve runoff and increase the moisture in the soil. Farmers are not interested in spending money on "soil conservation". Vetiver hedges providing moisture conservation are of course preventing soil erosion; you just don't need to mention it."

He adds, "We have got to revive the fact in the farmers' minds that crop plants are dependent not on the amount of rainfall, but on the soil moisture which the rainfall provides - excessively heavy falls under traditional methods of cultivation are lost by surface runoff and evaporation and are therefore relatively ineffective. Vetiver hedges hold back runoff for a great distance behind the hedge, they also prevent the loss of organic matter (farmyard manure) as we were able to show farmers down in our Karnataka project - they could see the benefit of that, we never mentioned soil conservation."

Are these vetiver hedges in any way better than contour bunds? "Certainly", elaborates John Greenfield. "A bund diverts runoff to the drainage network, thus denying the rainfed farm the full benefit of the rainfall it gets. The area immediately in front of the bund rarely gets sufficient moisture for crop growth. The vetiver hedge holds the rainfall back, spreads it out and gives it a chance to soak in to the ground as stored moisture. Excess runoff filters through the hedge and carries on down the slope at greatly reduced speed, but wetting all the ground as nature intended it to do."

"In a particular case in Karnataka," he recalls, "the farmers had planted their Ragi, received six millimetres rainfall, enough to germinate their seed but then no more rain for over a month, the seedlings died. Their neighbours who had planted vetiver hedges retained enough moisture in the soil to carry their plants over and produce very good yields."

"Soil moisture is essential for crop growth", analyses John Greenfield, "So, it is no use talking about the benefits of 'drought tolerant' and especially 'drought resistant' (which don't exist) crop varieties, as without sufficient moisture none of these will survive. Therefore it is essential that the rainfed farmer controls runoff to enhance moisture conservation - controlling runoff also controls soil loss. The only efficient way to control runoff is with the use of vetiver hedges."

Another widely adoptable use of vetiver is for embankment stabilisation. What is required is just timely planting of vetiver slips in linear rows across slopes. Using this technology alone, countries like China, Brazil, Philippines, Malaysia, Vietnam and the West Indies have saved millions of dollars. In recent years, China has extensively used vetiver for major highway and railroad embankment stabilisation. 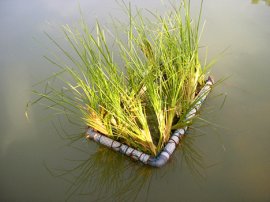 Apart from its value for soil and water conservation, vetiver can check weed invasion too. Points out Haridas, "Vetiver grass grows so densely that it can block the spread of other grasses including some of the world's worst creeping grasses. In Zimbabwe tobacco farmers reportedly plant vetiver around their fields to prevent invasion of other tough grasses. In Mauritius sugar cane growers rely on vetiver to prevent Bermuda grass from penetrating their fields from adjacent road-sides. In High Range, for example, a vetiver plot established at Kundaly in the early 1990s kept Kikyu grass (Pennisetum clandestinum) from creeping in. Obviously establishing vetiver hedges along the periphery of tea fields could prevent invasion of deep rooted tough grass weeds. "

Sums up Grimshaw: "Water ponds and tanks that are being cleaned and desilted would benefit from surrounding vetiver hedgerows to prevent future siltation, and floating platforms of vetiver on the ponds would significantly increase water quality. Spring heads can also be very effectively protected by vetiver. Additionally vetiver could be used in villages to help clean up household effluent, and stabilise those communities that live on steep slopes. "

One recently discovered attribute of vetiver is its capacity to purify water, and thus to help in wastewater treatment. Vetiveria zizanioides, a species widely present in India, can absorb many heavy metals, nitrogen and phosphorous from water. In studies conducted in China using vetiver to treat effluents from piggery farms, the results were quite encouraging. Using vetiver to purify water bodies is easy, too. Being hydrophyte, the plants don't require a separate medium to grow in water. The only arrangement required to make vetiver plants survive in water properly is a float to maintain the balance between roots and shoot and to make the plant stand erect. Cut pieces of bamboo make a good float.

In a lighter vein, Haridas says that our predecessors in the remote past would have named the plant "vetriver", a winner among roots. But, he complains, "we have made this 'miracle plant' an orphan in its own motherland".

•  Top to bottom, water and soil
•  Drought-proofed by tradition

Using vetiver, Haridas has started experiments in the company's estate and later in the pond of Mahavishnu temple at Thiruvali, his homeland near Manjeri in Malappuram District. Though both trials have just started, one promising aspect is of its good growth in water. "I was surprised to see growth of more than a foot in three weeks", he says.

TVN has been awarding certificates to individuals who have been doing good work and demonstrating a high level of knowledge in specific areas of the vetiver System technology. Haridas has been a recipient of this certificate of excellence. He is the only person from India to get this recognition so far, and is one of 14 persons from around the world.

Sometime ago, he had sent one truckload of vetiver tillers to a tea estate in Darjeeling. He says the owner of that company is quite satisfied with the results in soil and water conservation, but despite his excitement at vetiver's good performance in the tea estates, Haridas is far from happy. He'd like to see widespread adoption of vetiver by governments, which can really scale the benefits very high. He simply does not understand why our watershed departments and the administration have almost shut their doors to vetiver Grass Technology. While more and more countries are embracing vetiver technology, it is quite ironic to see that in India itself, vetiver is a sort of 'touch me not' plant, despite having its origins here! A few months ago, Haridas read a report in an English daily that upon hearing a success story of railroad stabilisation in China courtesy vetiver, Konkan Railways approached the railway authorities of China to know more about this. He sent a letter to Konkan Railways saying that the technology has in reality originated from our own country, and lot of information is available with him. Unfortunately, he hasn't drawn a response!

Haridas, though disappointed at our administrations' indifference to this simple, cheap and sustainable technology, is hopeful. He intends to concentrate on use of vetiver to purify water. The link with soil conservation is also a strong motivator. "To get the water stored properly you need a medium, which is the earth - hence our soil too has to be protected from erosion. Let us work on SOS (Save our Soil)", says this confident vetiverite.

Shree Padre is a journalist with many years of experience in agricultural reporting. He is the author of several books, including one on rainwater harvesting, published by Altermedia. P Haridas can be contacted at haridas.p@kdhptea.co.in.

URL for this article
http://indiatogether.org/vetiver-environment